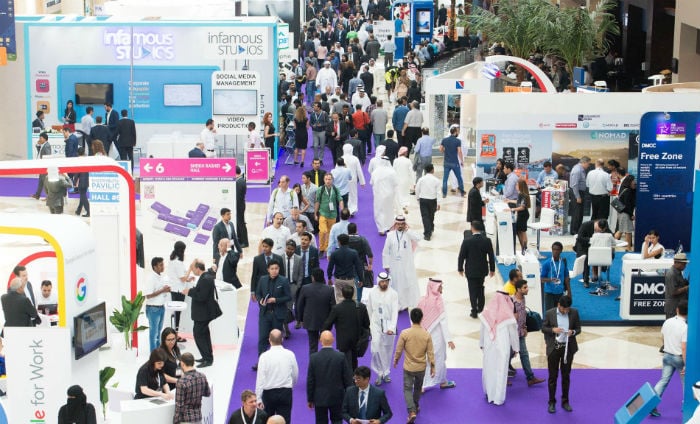 Again, not a day with too many launches, but interesting things on display. We leave you with another picture, this one of the new smart bus shelters that the RTA has planned across Dubai. 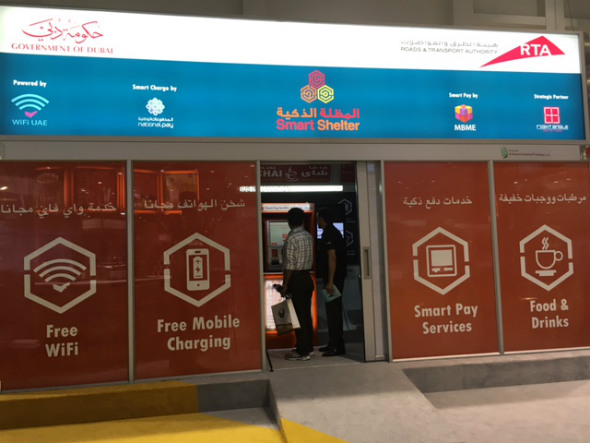 Following up from our 3D printing experience yesterday, we saw another massive machine today – what is claimed to be the biggest 3D printer in the world. It can print tables and chairs and all kinds of furniture items which can be conceptualised and designed by anyone. 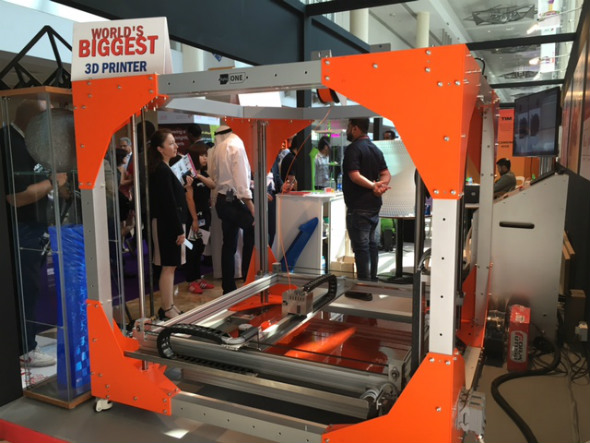 Consumer is clearly the king now. The UAE’s Telecommunications Regulatory Authority has just announced that both the telecom providers will now be offering broadband and fixed voice services to residential customers across the country. Previously du and Etisalat served specific areas of the country, limiting the choice of residents.

The move is expected to spark competition between the two providers while improving the quality of service offered to consumers.

As of now, the relaxation of the rule is limited to just residences and not businesses. But du’s chief executive Osman Sultan said that the choice could be made available to businesses in the next nine to 12 months.

The internet of things is already upon us in a very tangible form and to prove it, Cisco UAE’s general manager Rabih Dabboussi showed us this new tracker that they are working with on an experimental basis.

The device can track the movements of any object or person for up to one year on just one charge, he said. In terms of daily application, on a personal level it can be used to monitor children and help avoid tragedies like small children being left behind in school buses. It can also be used for industrial purposes such as to locate spare parts and facilitate better tracking at warehouses.

Abu Dhabi e-government’s System and Information Centre’s director general Rashed Lahej Al Mansoori told Gulf Business that the smart app was launched after noting increased demand from users. He said that the usage of Abu Dhabi e-government services rose by 35 per cent last year, prompting the government to continue investing in these services.

Day two has started at the media centre at Gitex (the exhibition only opens at 11.00am) with LG Electronics announcing the global launch of what it claims is the world’s narrowest bezel video wall.The ultra high-definition video wall display, measuring just 0.9 mm, is targeted at locations such as airports, shopping centres and hotels. 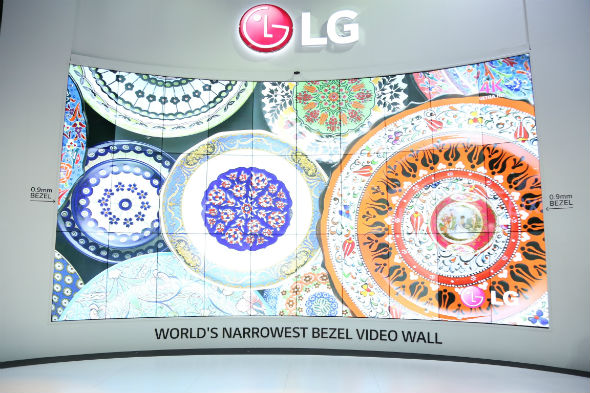 The first day of Gitex 2015 is winding up at DWTC. Although the event saw just a handful of app launches and new announcements, a number of interesting applications were on display at various stands.

Stay tuned to Gulf Business to know more about the latest technology news and launches during the second day of Gitex 2015. 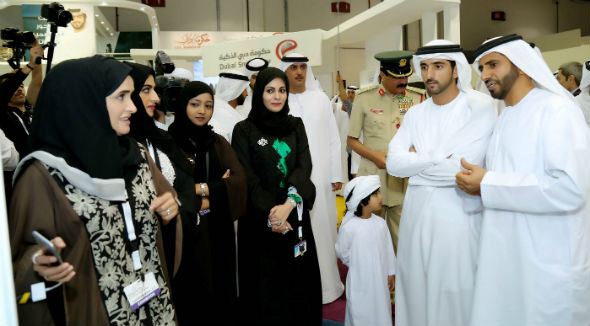 Not too many launches at Gitex this year, but the event has been busy.

We spoke to Windows Business Group lead at Microsoft Mohammed Arif who confirmed that the company has seen a very positive response to its new operating system, Windows 10.

He didn’t specify a date regarding when the new OS would be available for mobile devices in the region. But he confirmed it would be within the next few months.

Microsoft also displayed some of its latest devices at the event including the Surface Pro 4, an 8.4 mm thick tablet featuring a 12.3-inch display. The device is priced from $899 upwards.

The UAE’s Telecommunications Regulatory Authority has launched its latest innovation ‘Coverage’ at Gitex 2015. The solution will simulate a user’s experience and perform a field scanning to test, measure and analyse the quality of the operator’s networks in the country.

Coverage has been installed in two cars that will be sent out to the field to gauge the experience that users have with the two network operators du and Etisalat. Information will be transmitted real time to the TRA’s office and the data will then be provided to the operators so that they can improve their operations, a senior official said. Stay tuned to Gulf Business to read more about this initiative.

Just bumped into something interesting. While 3D printing is gaining popularity in sectors such as healthcare and education, new technology is now targetting the leisure segment. A machine on display here from Artec and Jacky’s Business Solutions allows you to scan and obtain a 3D print of yourself. Here’s a photo of the machine – 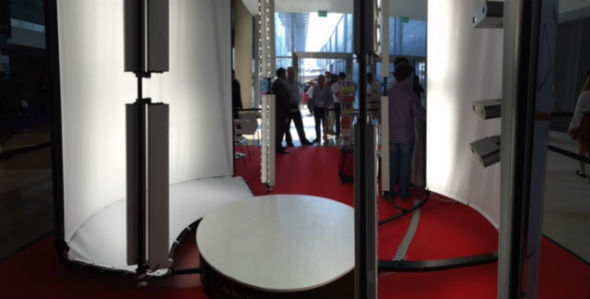 You stand in the centre and the machine gets a picture in a few seconds and then processes it. Once you have the file, you can get the image printed from any 3D printer. Although it does take between six to seven hours to get a model of yourself. Some examples on display – 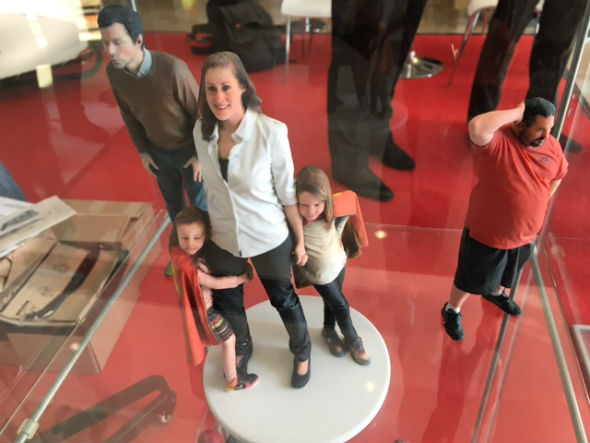 We just had a chat with a senior executive from Dell who confirmed that the company is expanding its regional operations. Dell, which recently announced a multi-billion dollar merger deal with EMC, hopes to increase its presence in various segments within the IT industry.

It recently combined its Middle East business with operations in Turkey and Africa and the entire region will have its headquarters in Dubai.

The company also plans to hire extensively across some of its divisions in Dubai – its healthcare unit is looking to recruit over 200 people while its security and IoT units are also looking to hire additional staff.

The Internet of Things is a key theme at Gitex 2015 and the Middle East is all set to become a prime driver of the IoT industry. According to a survey by global interconnections and data firm Equinix, the United Arab Emirates is one of the leading countries which is seeking an increasingly interconnected workforce.

Around 86 per cent of UAE businesses are intending to be fully integrated by 2017, the study which polled 1,000 global ICT decision makers showed. Meanwhile 45 per cent of interconnected UAE companies have realised that interconnection will have a significant impact on the bottom line with more than $10m in revenue opportunities and cost savings.

Government departments are at the forefront of announcing new smart applications at Gitex 2015. Dubai’s Roads and Transport Authority has launched applications including a Smart Mall and over 100 smart shelters for users.

“The Smart Mall project, undertaken by RTA in conjunction with Etisalat, is one of the innovative initiatives offering smart solutions of smart shopping to metro riders through interactive 3D Ultra High Definition screens of nine square meters in area, enabling two persons to carry out purchasing processes at a time. The initiative would be implemented in five metro stations; four on the Red Line: Mall of the Emirate, Damac Properties, Dubai Internet City, and Abu Dhabi Commercial Bank, in addition to one station on the Green Line: Baniyas Station,” said RTA’s chairman Mattar Al Tayer.

Initially just food products will be sold at the Smart Mall, Al Tayer said. Items such as clothing and electronics will be added later.

The RTA will also be constructing 100 smart air-conditioned bus shelters offering complimentary internet to public transport users and other services to the public. About 50 stations will be constructed over the next two months while 50 more will be built next January.

Gitex 2015 is officially open to visitors. His Highness Sheikh Hamdan bin Mohammed bin Rashid Al Maktoum, Crown Prince of Dubai has opened the region’s largest ICT show. Dubai has taken a step forward to be a smarter city with the new open data law that was introduced today. The new regulation establishes rules for sharing non-confidential data between public and private sectors in the emirate while helping boost investments in digital economy. Read more about the law here.

With the information and communications technology sector one of the fastest growing industries in the United Arab Emirates, the 35th edition of Gitex Technology Week is expected to see a busy turnout this year. Held at Dubai World Trade Centre, the show is expecting more than 130,000 visitors from over 150 countries, with more than 20,000 C-level executives and more than 3,600 exhibiting brands from 62 countries.

Stay tuned, as Gulf Business will be meeting a lot of industry leaders and bring you all the new launches and latest insights from the show.