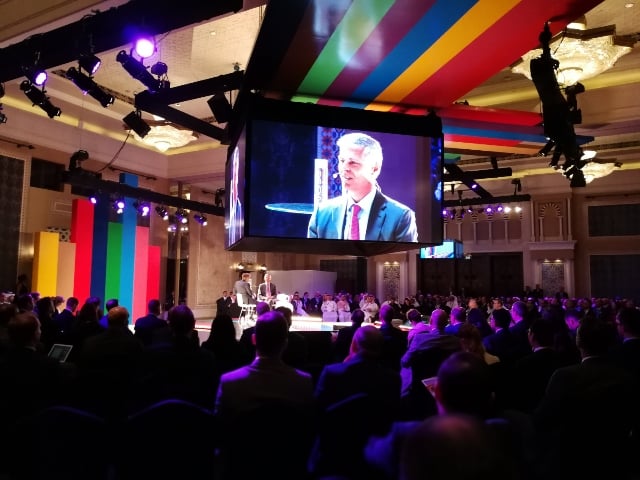 6:30pm That’s all for today check out our May and June issues for a more indepth look at the region’s travel and tourism industries.

5:40pm: Hotel market data firm STR is predicting Gulf hotel markets will perform better than it previously expected this year due to positive signs in the first quarter.

Managing director Robin Rossmann told Gulf Business the average RevPAR decline it forecast across the region would likely be revised downward and there could even be growth in 2018.

4:30pm Another new announcement today comes from Jannah Hotels and Resorts, which has revealed plans for the 252-room Jannah Al Khan Hotel & Spa in Sharjah. The 56-floor property marks the brand’s entry into the emirate and is located on on Al Khan Lagoon, Ras Al Khor.

Features include what is claimed to be the largest royal suite in Sharjah, which includes a private pool, a terrace with a private dining area, a contemporary kitchen and large living areas.

2:50pm STR is now delivering its presentation detailing mixed performance across the Middle East in the first quarter. 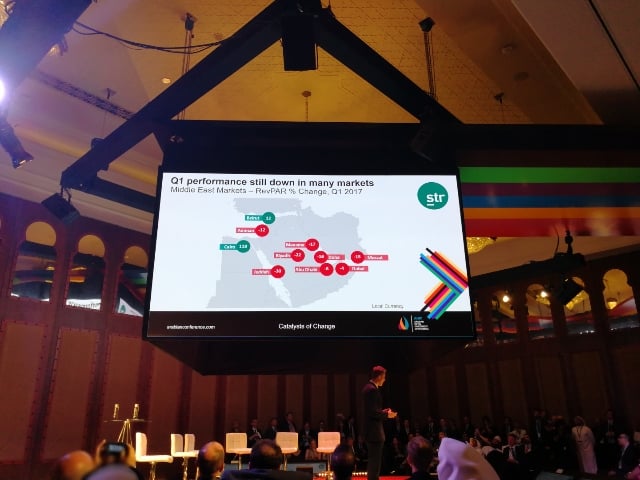 2:38pm One of the day’s most interesting sessions has surprisingly turned out to be the brand clinic and the need for international brands.

An outspoken Imad Elias, CEO of Roda Hotels, has described online travel agents as daylight robbers and questioned the value of international brands.

There were also messages of concern from owner Ani Bhardwaj, director of A.A. Al Moosa Enterprises, who said international chains had lost some of their polish and needed to focus more on keeping owners happy.

2:10pm: Falling hotel rates and government encouragement have prompted Louvre Hotels Group to switch its focus to the midmarket segment in the Middle East and North Africa, according to regional president Amine Moukarzel.

The group has plans to open 10 new hotels before the end of the year, adding a total of 1,600 keys to its current inventory.

“I’m not saying the good old days are over,” Moukarzel said, but he suggested the challenging environment in some countries and more budget conscious consumer habits had prompted a shift in the company’s strategy.

“Personally I think it will be more than that and not less,” he told Gulf Business.

The firm’s planned launchings include 11 hotels in Saudi alone and five in Turkey, of which two are already open.

Wilson also spoke of general sentiment in the market, suggesting there was “too much negativity” and falling hotel rates was a global trend and not one specific to the GCC.

“It’s been a difficult period but nothing we can’t handle,” he added.

11:55 The following session focussed on the economic challenges faced by hotel operators in the region with the upcoming implementation of VAT a key focus.

Panellist Ignace Bauwens, regional VP for Middle East and Africa at Wyndham Hotel Group, argued that the tax was making an already expensive destination more expensive at a time when Gulf countries are seeking to attract tourists.

“We will potentially be adding 25-30 per cent on a guest’s tax bill,” he said, adding that this was at a time when the company had seen RevPAR decline in the majority of GCC countries.

10:40am: Emirates NBD has delivered a positive outlook for growth in the private sector this year.

On stage Shady Shaher Elborno, head of macro strategy for global markets and treasury, said the company was more optimistic moving into “2017 and 2018” but he was unsure if the market was past the worst due to global factors.

10:10am: Now the conversation is moving to the number of brands held by some companies and whether the likes of Marriott and Accor now have too many following their recent acquisitions.

In response Jumeirah Group CEO Stefan Leser questioned whether Marriott or Accor could sustain their now significant brand portfolios “in the long run”.

“If you look at other big companies and how many brands they sustain it’s not 30 its five,” he said.

10:05am: Harnisch adds that hotel operators as an industry have been “appalling as using data and is still not making full use of personal data on guests to customise their experience before they book.

10:00am Marriott’s president and MD for Middle East and Africa, Alex Kyriakidis, also detailed the group’s gains from technology adoption with its mobile app now generating nearly $2bn of revenue.

He said the company’s next focus was on experiences following the announcement of its investment in provider Placepass.

9:50am On the main stage now a panel is discussing the catalysts of change in the hotel industry.

Most of the panellists point to technology as a key driver of change.

Olivier Harnisch, the CEO of Emaar Hospitality, said he expected the technology impact would be in areas like the internet of things and automating repetitive tasks rather than robots greeting guests.

9:20: Hilton also announced this morning plans to open a new Curio Collection hotel in Dubai after signing a management agreement with Khamas Group of Investments and Bethahab Group.

9:10 Today we are at AHIC where Hilton president and CEO Christopher Nassetta is on stage.

In a lengthy discussion he made it clear the company was not seeking acquisitions like rivals Marriott and Accor.

“We just concluded it didn’t make sense for us and for the foreseeable future that’s our path” he said.

Although he added: “never say never”.

Nassetta forecast there would be further consolidation in the industry because “scale matters”.

He also detailed the company’s plans for the midtier True brand which is debuting in the US.

Hilton has signed 400 deals for the brand so far in its home market and could take it overseas next year, Nassetta said.