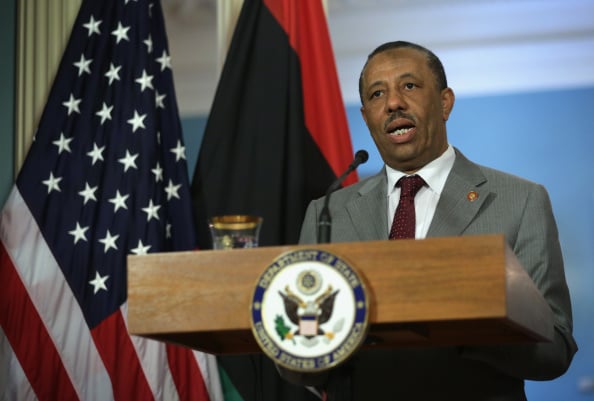 The government had already accused Sudan of having tried to arm an Islamist-leaning group which seized Tripoli last month, forcing senior officials and the elected parliament to relocate to the east, part of a growing state of anarchy.

There was no immediate comment from Qatar, a Gulf Arab state which has backed the Muslim Brotherhood, an Islamist movement which has some ties to the group now controlling Tripoli.

Analysts say Libya is turning into a conflict zone for competing regional powers as the country faces the prospect of becoming a failed state or even civil war three years after the ousting of Muammar Gaddafi.

U.S. officials have said that the United Arab Emirates and Egypt, two countries worried about the spread of radical Islamists in Libya, carried out air strikes against an armed group from the western city of Misrata conquering Tripoli last month.

“We confirm that we have official reports that these war planes carried weapons and ammunition,” he said. “What does Qatar want to give to the Libyan people ?”

Thinni also repeated accusations against Sudan, saying Khartoum had tried sending a military plane loaded with ammunition to Matiga, an airport controlled by the Misrata forces.

The North African country is divided, with a government and elected parliament that have relocated to Tobruk in the far east since losing control of the capital, and a rival assembly and government set up by the Misrata force.

“The Sudanese brothers are trying to interfere in Libya’s affairs,” Thinni said.

Sudan has confirmed it had sent a plane to the Libyan airport of Kufra but says it was only carrying equipment for a joint Libyan-Sudanese border force.

Thinni said the Qatari military planes had arrived in Matiga before the Sudanese plane was stopped by Libyan forces in Kufra, a desert town near the Sudanese border.

Libya’s government is unable to control dozens of former rebel groups who helped topple Gaddafi but now fight each other for power and a share of oil resources. The fluid situation in Tripoli has been worsened by a separate battle between the army and a general who has defected from it, both fighting militant Islamists.

The Islamists, including Ansar al-Sharia, made progress on Sunday in trying to take the airport, the last government bastion in the city, by moving closer, residents said.

The central bank has tried to stay out of the political struggle but has been facing demands from both parliaments to approve budget payments. The bank is responsible for booking the country’s oil revenues in its accounts. These make up Libya’s only source of income for its budget.

The dismissal of Elkaber will leave deputy governor Ali al-Hibri in charge of the central bank until a successor is appointed. Elkaber is currently in Algiers for a conference of Arab central bank directors.