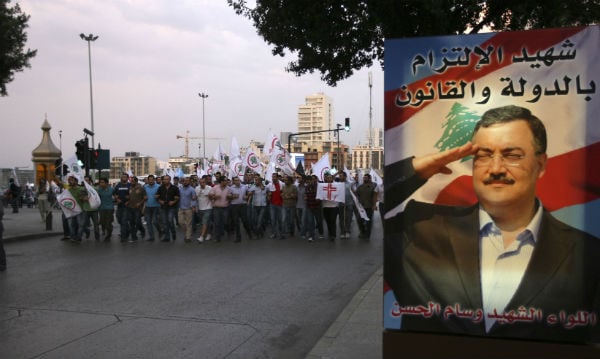 Hassan, who uncovered an alleged Syrian bomb plot inside Lebanon two months ago, was killed in a huge car bomb blast that also killed seven other people and wounded 80 in Beirut’s Ashrafiyeh district on Friday.

The death of Hassan, a Sunni Muslim from the northern city of Tripoli who was close to the powerful Hariri political clan, has inflamed Sunni anger. Protesters blocked roads with burning tyres and gunmen took to the streets of Beirut and Tripoli.

Deep-seated sectarian tensions in Lebanon, which fought a ruinous civil war from 1975 to 1990, have been exacerbated by the conflict in neighbouring Syria, where majority Muslims are fighting to overthrow Assad, who is from the Alawite minority which has its roots in Shi’ite Islam.

Sunday’s funeral ceremony will set off from Hassan’s Internal Security Force headquarters in Ashrafiyeh, passing the site of Friday’s bombing before reaching Martyrs’ Square in central Beirut where he will be buried alongside Hariri’s father Rafik, killed in a 2005 bombing on the Beirut seafront.

“Every one of you is personally invited tomorrow to Martyr’s Square to the prayers for Wissam al-Hassan,” Saad Hariri said in a statement broadcast by Future Television on Saturday.

“All of Lebanon, which Wissam al-Hassan protected from the plots of Bashar al-Assad and Ali Mamlouk … exposing himself so that you would not be blown up,” Hariri said, referring to a Syrian general indicted in August over the alleged bomb plot.

Mikati said he wanted to resign to make way for a “consensus government” but had accepted a request by President Michel Suleiman to stay in office to allow time for talks on a way out of the political crisis “because there are fears that Lebanon could be dragged into strife”.

A Western diplomat in Beirut said the United States and European Union were trying to dampen demands by Hariri and the March 14 political opposition for Mikati to step down.

“There is understandable rage, and tomorrow’s funeral will reflect that. It could be combustible,” he said. “But they need to turn their anger away from calling for Mikati’s resignation”.

Lebanon is due to hold a parliamentary election next year, but the opposition anger and Mikati’s own comments suggest he may not lead the country into the vote, which could be overshadowed by deepening violence.

“The situation is fragile. I don’t know if this is the first in a series of attacks – history would suggest it is,” the diplomat said, referring to a wave of assassinations in Lebanon following the 2005 killing of Rafik Hariri.

“Of all the people to go for, Hassan was the most dangerous target in terms of hitting Lebanon’s stability.”

Lebanon’s religious communities are divided between those that support Assad in Syria’s civil war and those that back the Sunni-led rebels, despite Mikati’s policy of “dissociation” which sought in vain to insulate the country from turmoil in its larger neighbour, which dominated Lebanon for decades.

Mikati said on Saturday he suspected Hassan’s assassination was linked to his role in uncovering Syrian involvement in the bomb plot.

“A prime minister does not anticipate investigations, but quite honestly … I cannot separate in any way the crime that took place yesterday and the discovery of the conspiracy against Lebanon in August,” he said.

In Beirut, troops reinforced road junctions and official buildings but many roads, including the highway to the international airport, were blocked by demonstrators.

In the capital’s Sunni Muslim areas, where most people are opposed to Assad, cars mounted with loudspeakers cruised the streets issuing calls for the government to resign. Dozens of gunmen were in the streets and the mood was tense.

In the northern city of Tripoli, four people were wounded on Saturday by sniper fire on Jebel Mohsen, a neighbourhood which is home to members of Assad’s minority Alawite faith. A pro-Hezbollah religious figure was killed in clashes in Tripoli on Friday night, residents said.

Lebanese soldiers opened fire on a group who took over a road in the Bekaa Valley, wounding two people, witnesses said. Rallies were also held in the southern town of Sidon.