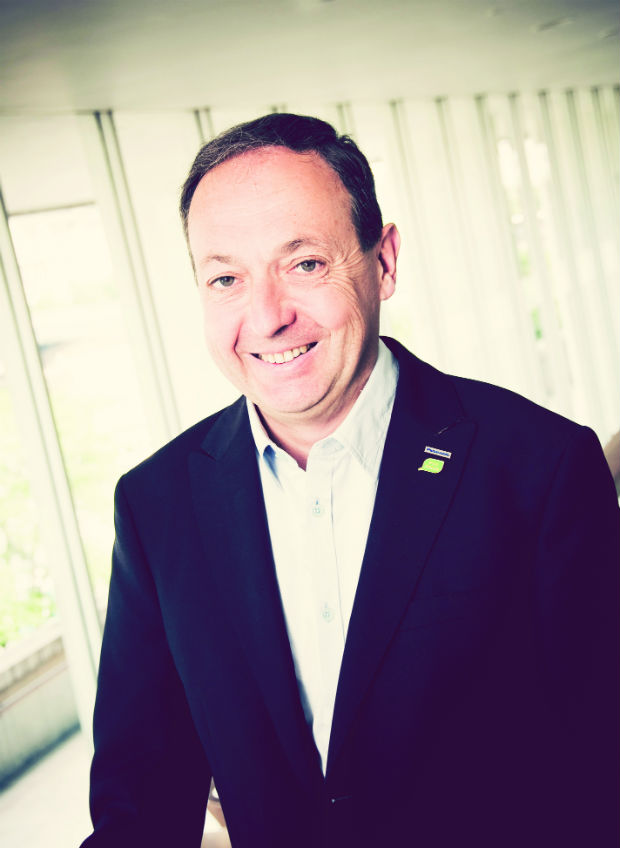 If Laurent Abadie is at all worried about Japan’s consumer electronics slump, then he’s very good at hiding it. The affable Frenchman was appointed boss of Panasonic Europe and CIS in 2009 just as the tech giant was beginning to bleed losses on the back of the global credit crunch. More than this, Japan’s identity was beginning to flounder as its old-school tech firms struggled amid the digital age.

Panasonic chairman and CEO Abadie is speaking from a back room at IFA, Berlin – the world’s largest consumer electronics show and a launch pad for the latest innovations from an increasingly embattled band of tech firms. “It’s going to be a very busy few days,” he confides.

As the latest bastion of defence against Panasonic’s bothersome Chinese and South Korean competitors, it’s as classy as it is defiant.

Abadie’s PR team offers me a brewed coffee from the onsite Panasonic machine. While the fancy-looking latte looks very refreshing, it’s also testament to the Japanese firm’s sprawling and eclectic home appliances portfolio, which features facial steamers, premium hair styling gadgets and food processing equipment, among others, not to mention the fact that Panasonic is world number for bread makers. Yes, bread makers.

“Bread makers and rice bread makers are very interesting products,” muses Abadie. “Even in Japan they cook bread with rice now. You also have the gluten-free aspect of rice bread, so it’s a growing market.”

Home appliances across the board have been something of a comfort sector for Panasonic as rampant overseas competition and commoditisation continue to pummel its TV and phone revenues.

The Japanese tech giant sold around six per cent of the world’s washing machines and 3.6 per cent of the globe’s refrigerators last year, while sales across Panasonic’s appliances business reached 1.468 billion yen for the fiscal year of 2013 – up 32 per cent on 1.115 billion yen the year before and accounting for 40 per cent of the firm’s total revenues.

Still smarting from losses of $15 billion in the last two fiscal years, Panasonic is scrambling to evolve its operational model and push into the business-to-business [B2B] sector, while also expanding its flourishing white goods sector.

But Abadie wants to be clear on this point: “Globally B2B is much bigger, more than 50 per cent of our business, but I wouldn’t say we’re moving away from the consumer [B2C] sector exactly, we’re growing more in the B2B market.”

On March 28 this year, Panasonic announced a massive shakeup of its consumer division, a drive into B2B, and restructurings as part of a global strategy to revive the firm.

But this ‘make or break’ moment is not exclusive to Panasonic: the same shadow befalls a clutch of fallen Japanese tech giants, including Sony and Sharp.

With the advent of digital commoditisation, the lesson for all Japanese tech firms is that engineering par excellence is not enough; there must be big ideas (like Sony’s epic Walkman) but they must also be fast, frequent, and backed by generous marketing pockets. Diversity is also critical.

China, which in 2010 leapfrogged Japan to become the world’s second largest economy, now makes more cars and PCs than Japan, while South Korea outsells Japan in most TV and smartphone markets.

The likes of Samsung and LG have bitten hard into Japan’s once thriving consumer electronics fiefdom and the pain is unlikely to subside for sometime yet.

To underline Panasonic’s deepening journey into the B2B sector, the firm has changed its catchy ‘Ideas For Life’ slogan to ‘A Better Life, A Better World’.

Abadie says: “Panasonic had its Ideas For Life slogan for so many years and it became a little bit distant from what the company is becoming.

“Panasonic is a huge company with a lot of activities and ‘better life’ is focusing on B2C, while ‘better world’ is more B2B, and that’s where our growth is.”

While Panasonic’s share of the European consumer electronics market remains stable at around 11 per cent, profits are dwindling, owing to fierce cost competition, lack of volume and the advent of LED.

In its glory days Panasonic sold most of the world’s high-end plasma TV screens, but it’s not a business the firm wants to focus on. According to Reuters reports, Panasonic is looking at departing from the plasma TV arena altogether in March 2014. The firm also ditched its mobile phone business this year.

New president Kazuhiro Tsuga, appointed in June 2012, warned that he would weed out any division that fails to meet a five per cent operating margin goal within three years. Non- core assets are also being sold as he overhauls the company.

“Panasonic is very much focused on engineering and R&D, value-added products, but we are not a company that is looking for commoditised markets and producing simple products at a low price. We have tried to do this but we saw the market becoming commoditised and mature, so we don’t see any value in these products,” explains Abadie.

“However, next year in Europe and the US, we are planning to launch professional smartphones, products for industry or sales forces, with specific applications for B2B.

“Of course, it is not a big market, but long-term it is an interesting market; people need smartphones for their business like utilities or sale forces.Existing consumer products are not meant for professional use. We are also thinking of introducing a range of smart Tough tablets in Europe and US next year.”

Panasonic’s mid-term plan aims to double the electronics maker’s sales of automotive components to two trillion yen by 2018 through mergers and acquisitions. Cockpit systems, ultrasound sensors, automotive cameras and batteries are all focal points in Panasonic’s bid to bolster its car business.

Abadie says: “We are strong in automotive. We are producing everything for electric cars, except the wheels and chassis. This is an important sector for us going forward, it is a growing business, and it will only grow further because new car technology is a high growth sector.”

To this end, Panasonic purchased Sanyo Electric Company in 2009 to focus on rechargeable batteries and solar panels.

Abadie says: “Another growth sector is energy: we are working on the technology to both produce and store energy, for cars and houses. We are also focusing on equipment and communication products for aeroplanes; Emirates airline is using Panasonic technology but, of course, you cannot see the brand.”

Is it a problem that Panasonic’s brand may go unrecognised as other brands piggyback on its technology?

“This is a new issue. We are extremely strong in automotive and energy but no one can see the brand, that’s my problem. When we ask Etihad or Emirates to display the Panasonic brand, they say ‘no, this is our brand’.

“It’s the same with car manufacturers, they say ‘no’. They want us to hide, and that’s an issue. I’m sure in your daily life you use a lot of equipment and technology that is Panasonic and you don’t know…” he trails off.

Abadie concedes that while the lack of recognition may be irksome, the reality is that the B2B business turns in a handsome profit.

“This is a complex arrangement with key customers; a lot of hardware, software and services are involved and this is, for sure, more profitable. Consumer value-added products are profitable, but Panasonic is not good at the low-priced products.”

Abadie says Panasonic will focus on end-to-end solutions across the board, with a focus on value-added applications, software and cloud computing.

“The way we use technology and the way we live will change a lot,” Abadie says, in a firm nod to the company’s impressive ‘smart home’ installation
at the IFA tech show, where guests are treated to a kitchen that’s almost entirely voice-activated, from turning on the water tap, to finding recipes, and cooking eggs.

Panasonic’s new strategy is nothing if not bold. And the firm is already reaping the rewards, posting a $654.7 million first quarter 2013 profit, beating analyst expectations.

“We are on a positive track. We have a new management team and a restructuring plan. On top of that, the yen position is helping. The company has huge potential across all activities. These days, less and less of Panasonic’s performance is related to global consumer confidence,” Abadie says.

It remains to be seen whether Panasonic, one of Japan’s most iconic companies, can turn a corner and re-tweak its solid heritage for the modern world.

And, crucially, while it’s important for Panasonic to maneuver itself out of this crisis point, it’s even more important for Japan.