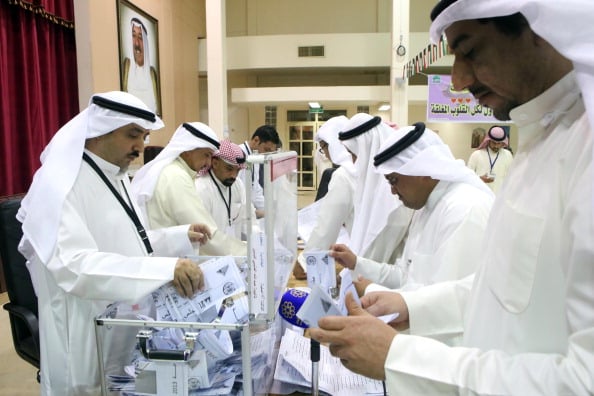 Kuwaitis voted for the sixth time in seven years on Saturday in a parliamentary election boycotted by the main Islamist and populist opposition, which may help liberals and independents win seats.

Turnout was expected to be low in summer temperatures hitting 44 degrees Celsius (111 Fahrenheit) during the Muslim fasting month of Ramadan, and as Kuwaitis become fed up with voting in short-lived parliaments.

The opposition boycott may produce a parliament more willing to cooperate with the government on economic development than some of its predecessors in a country where political infighting has held up investment.

“Voting is a national duty,” said Mohsen Dashti, a 40-year-old doctor who was casting his vote in a coastal district south of the capital. “We need reconciliation between the parliament and the government as well as a focus on development.”

The oil-producing U.S. ally has the most open political system in the Gulf Arab region. While it has witnessed sizeable street protests in the past two years over local issues, its generous welfare system and relative tolerance of dissent have helped to shield it from Arab Spring-style unrest.

But parliaments have been dissolved time and again, usually for getting too bold in challenging government ministers.

The snap election was triggered by a ruling from the top court in June, which said the process leading up to the last one in December was legally flawed.

Almost constant political upheaval and entrenched bureaucracy have held up major parts of a KD30 billion ($105-billion) development plan announced in 2010 to build a refinery, airport, hospitals, housing and highways.

Kuwaitis say they face housing shortages, clogged roads and an old-fashioned airport despite living in one of the world’s richest countries per capita. They point out that other Gulf states, such as Qatar and the United Arab Emirates, have pushed ahead with bold modernisation projects.

“It is very difficult and it is very depressing for us to have so many elections in such a short time,” said lecturer Wasmeyah al-Abbad after casting her ballot in an upmarket district close to Kuwait City.

Abbad, in her 50s, said the issues important to her were women’s rights, inequality and the dominance of powerful families in politics and the economy: “Men get houses, but women don’t, we don’t get to choose our careers, and some names are dominating positions.”

Campaign themes have included corruption, loan relief and concern over a $4 billion aid package to Egypt after the military overthrow of Islamist President Mohamed Mursi.

On Saturday Kuwaitis on Twitter vented frustration at the aid promise, saying the money could be better spent at home.

Kuwait and other Gulf states like Saudi Arabia and the United Arab Emirates were glad to see the back of Mursi because they are fearful of Islamist influence in their own conservative, dynastically ruled countries.

The mainly Islamist and populist opposition is boycotting in protest against a new voting system announced last October, which cut the number of votes per citizen to one from four, and which it says would prevent it forming a majority in parliament.

In a country where political parties are banned, the old system helped opposition politicians to form alliances by offering reciprocal backing from their supporters.

“The election will lead to a sham parliament that the government will control,” said Mohammad al-Dallal, a former Islamist MP who joined the boycott. He said many Kuwaitis believed the parliament would not last long and be invalidated by a court ruling or by the emir, like previous assemblies.

“Electing such parliaments is a waste of time,” he said.

The government says the voting changes brought Kuwait into line with other countries and will ensure stability.

Saturday’s vote will elect a 50-member assembly which can pass legislation and interrogate government ministers. But the 84-year-old emir, Sheikh Sabah al-Ahmad al-Sabah, has the final say in state matters and can dissolve parliament.

The emir courted groups unhappy about the new voting system and encouraged several powerful tribes to endorse the election. That led to splits in the opposition, with liberals deciding to run as well as Salafi Islamists, who support the austere form of Islam practised in Saudi Arabia.