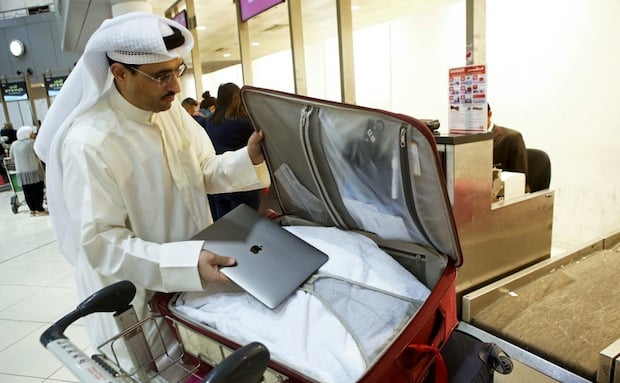 Royal Jordanian and Kuwait Airways are the latest Middle East carriers to be exempted from an in-cabin ban on laptops and other large electronic devices on flights to the United States.

The Jordanian and Kuwaiti airlines join Emirates, Etihad Airways, Qatar Airways and Turkish Airlines, which each last week announced a lifting of the ban.

In March, the United States banned laptops and other large electronic devices on flights originating at 10 airports in eight countries — Egypt, Morocco, Jordan, the United Arab Emirates, Saudi Arabia, Kuwait, Qatar and Turkey — to tackle fears that bombs could be concealed in them.

Royal Jordanian, which flies to New York, Chicago and Detroit from Amman, Jordan, lifted the ban after new security measures were adopted for U.S.-bound flights, airline President Stefan Pichler said in a statement on Sunday.

State-owned Kuwait Airways, which flies from Kuwait to New York via Ireland, said the ban was lifted after U.S. officials inspected security measures on its flights.

The new U.S. measures, which take effect within three weeks of the announcement, will affect around 325,000 passengers a day travelling on 180 airlines from 280 airports around the world, according to the U.S. Department of Homeland Security.

Airlines that fail to meet the new requirements could still face in-cabin restrictions on electronic devices.

Saudi Arabian Airlines (Saudia) has said it expects the ban to be lifted on flights from Jeddah and Riyadh by July 19.

Royal Air Maroc also believes it can have the ban lifted for flights out of Casablanca’s Mohammed V International Airport by July 19, a senior official from the state-owned airline told Reuters on July 6.

State-owned EgyptAir has also been affected by the ban.