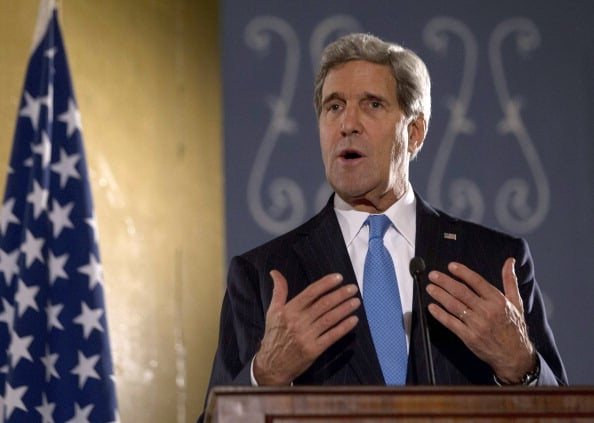 U.S. Secretary of State John Kerry arrived in Riyadh on Wednesday to press for a pause in Saudi Arabia’s bombing campaign against Houthi rebels in Yemen, so food and medicine can be delivered to people caught in the fighting.

Speaking at a news conference in Djibouti, the first secretary of state to visit the tiny Horn of Africa nation, Kerry said the United States was deeply concerned with the worsening humanitarian conditions.

“The situation is getting more dire by the day and we are concerned about that,” Kerry said before flying to Riyadh. “We will be discussing the nature of the pause and how it might be implemented. I am convinced of their desire to implement the pause.”

Kerry suggested he spoke to Iran’s Foreign Minister Mohammad Javad Zarif this week to convince the Iranian-backed Houthi fighters to also agree to a pause.

“In my conversation yesterday with another foreign minister from another country, there was an indication that … the Houthi might be willing to engage in a pause,” he said.

A Saudi-led Arab coalition began air strikes in Yemen on March 26 against the Houthi fighters. Backed by forces loyal to former President Ali Abdullah Saleh, the Houthi have seized control of parts of the country, including the capital, Sanaa.

Saudi Arabia says the campaign is aimed at restoring President Abd-Rabbu Mansour Hadi’s government. The Houthis say their campaign was aimed at fighting al Qaeda militants and to combat corruption.

So far, the effects of the Saudi attacks look limited. On Wednesday, Houthi militia fought their way into a district of Aden, where Hadi briefly based his government when he was forced out of Sanaa. Houthi attacks on Aden have since forced him to flee to Saudi Arabia.

Shortly after his arrival in Riyadh, Kerry met with Saudi Arabia’s new heir to the throne, Crown Prince Mohammed bin Nayef, before a slew of more meetings on Thursday, including with Hadi and Saudi’s new King Salman.

Kerry said the United States had urged both sides in the Yemen conflict to comply with humanitarian laws and to ensure that civilians were not caught in the line of fire.

He announced $68 million in new U.S. aid for relief agencies working in Yemen, as humanitarian groups warned fuel shortages could affect their efforts to tackle the crisis. That shortage has crippled hospitals and food supplies in the past weeks.

In New York, U.N. spokesman Farhan Haq said Secretary-General Ban Ki-moon continued to push a full-fledged ceasefire. “Short of that, there is a need for a humanitarian pause,” he said when asked about Kerry’s remarks. “It’s particularly urgent to have some kind of pause to allow for aid to get in,” said Haq.

Kerry was pressing for shelling to be halted at the airport in Sanaa so flights carrying aid could land. Ports also need to be opened so that fuel and other facilities can get in, Haq added.

“We are broadly supportive of the effort for a humanitarian pause, but that should be seen as just a stepping stone towards what we want, which is ultimately a ceasefire,” he said.

The head of aid group Oxfam America, Raymond Offenheiser, said while Kerry was in Riyadh, he must insist that land, sea and air routes into Yemen are opened immediately.

“The time for quiet diplomacy has long since passed,” Offenheiser said in a statement.