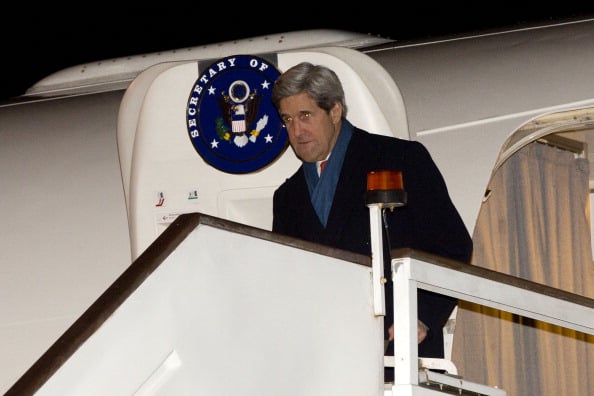 John Kerry views his first trip as U.S. secretary of state as a listening tour, but the leaders he meets will want to hear whether he has any new ideas on Syria, Iran and the Israeli-Palestinian conflict.

Kerry arrived on Sunday in London, the first stop on a nine-nation, 11-day trip that will also take him to Berlin, Paris, Rome, Ankara, Cairo, Riyadh, Abu Dhabi and Doha before he returns home on March 6.

After talks with allies in London, Berlin and Paris, the centerpiece of Kerry’s European tour is a visit to Rome where he hopes to meet members of the Syrian opposition as well as a wider group of nations seeking to support them in their nearly two-year quest to oust Syrian President Bashar al-Assad.

Those talks, however, appeared to be in some doubt as a result of dissension within the opposition about the utility of such international meetings given the continuing violence.

Nearly 70,000 people have been killed in Syria’s civil war in the last 22 months since fighting broke out between rebels trying to oust Syrian President Bashar al-Assad and government forces and allied militias.

“The Syrian opposition leadership is under severe pressure now from its membership, from the Syrian people, to get more support from the international community and in that context there’s quite a bit of internal discussion about the value of going to international conferences,” the official told reporters travelling with U.S. Secretary of State John Kerry.

“The point that we’re trying to make … is that they have an opportunity in Rome with the meeting that the Italians have offered to host to see the very countries that have been their greatest supporters,” the official said.

President Barack Obama has limited U.S. support to non-lethal aid for the rebels who, despite receiving weapons from countries such as Qatar and Saudi Arabia, are poorly armed compared to Assad’s army and loyalist militias.

U.S. officials travelling with Kerry declined to say what new thoughts he may have on ending the violence.

They also said they did not expect any breakthroughs in Berlin on Tuesday when he meets Foreign Minister Sergei Lavrov of Russia, which along with China has blocked U.N. Security Council resolutions to sanction the Assad government.

Russia has said that insisting on Assad’s departure as a condition for peace negotiations between the government and the opposition would prevent such talks from ever taking place. The opposition, backed by the United States and much of Europe, has made plain Assad can play no role in a future Syrian government.

“We are not expecting this meeting to be a big breakthrough either, but we’re going to keep working it,” a second senior U.S. official told reporters with Kerry.

Kerry makes his first foreign trip as senior U.S. diplomats, along with counterparts from Britain, China, France, Germany and Russia, will meet Iranian officials on Tuesday in Kazakhstan in an effort to persuade Iran to curtail its nuclear programme.

The United States and many of its allies suspect Iran may be using its civil nuclear programme as a cover to develop atomic weapons, a possibility that Israel, which is regarded as the Middle East’s only nuclear power, sees as an existential threat.

Iran says its programme is solely for peaceful purposes, such as generating electricity and making medical isotopes.

Bruce Riedel of the Brookings Institution think-tank said Saudi King Abdullah would regard himself, rather than Kerry, as the listening party and want to hear of any new U.S. approaches on the Israeli-Palestinian conflict, Iran and other issues.

“There is not a high level of expectation that it is going to be able to break the logjam on the Israeli-Palestinian conflict, get Iran to give up its nuclear weapons programme and topple Bashar al-Assad,” he added. “The Saudis will understand that Kerry will try to put a new face on policies which are now pretty well known but they will be looking for what’s new.”