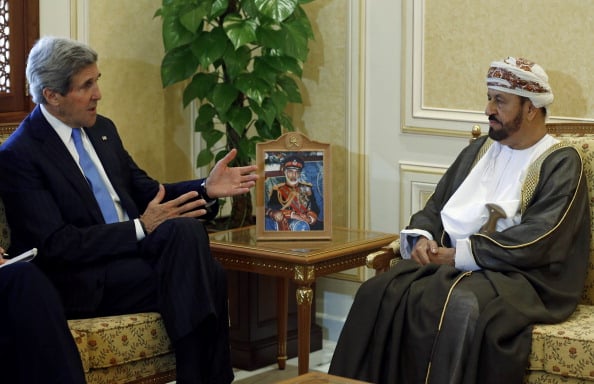 “I wanted to come here to be able to thank you and to celebrate with you the Raytheon initiative for the $1.6 billion dollar ground based air defense system which Oman is going to put in place,” Kerry said as he met Oman’s defense minister.

“We are…very grateful for your confidence in Raytheon.”

A senior U.S. State Department official said on Wednesday the deal’s value was in fact expected to be $2.1 billion, as U.S. officials had previously estimated, though the exact size and content were still under negotiation.

Oman and Raytheon did not sign a letter of intent for the arms deal during Kerry’s visit to the U.S.-allied Gulf Arab state in contrast to the predictions of U.S. officials earlier this week.

“The letter of intent will be signed soon, but they are still finalizing technical details,” said the senior State Department official, who spoke on condition of anonymity.

In a joint Statement released at the end of Kerry’s visit, the United States and Oman said negotiations with Raytheon were in final stages and “a final conclusion of the deal is expected following agreements on the technical aspects of the system, through life support and maintenance and other related matters”.

Part of the sale has been previously disclosed. In October 2011, the U.S. Defense Department notified Congress of a proposed $1.25 billion sale of Avenger fire units, Stinger missiles and Advanced Medium Range Air to Air Missiles to Oman.

Under the U.S. system, such sales are typically disclosed to Congress, which has the right to reject them, long before a final contract is signed. The signing of a letter of intent is only one further step along the way to a final deal.

From Oman, which sits opposite Iran on the strategic Strait of Hormuz, Kerry flies to Amman, Jordan, for talks with Western and Arab states about how he hopes to bring Syria’s government and opposition together for peace talks to try to end their more than two-year civil war.