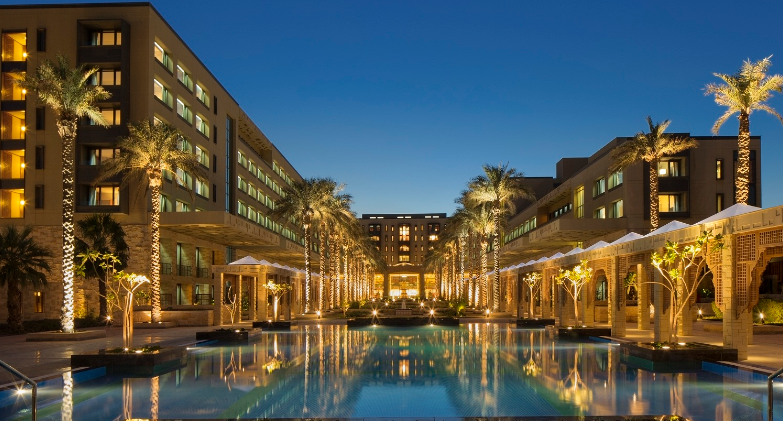 The Jumeirah Messilah Beach Hotel and Spa in Kuwait will have its soft opening on May 7.

Jumeirah’s first hotel in the Gulf outside the UAE is close to Kuwait City’s financial centre and 10 minutes from Kuwait International Airport.

The hotel, designed by architects Skidmore, Owings and Merrill from New York, the architects behind Burj Khalifa, aims to put raise Kuwait’s hospitality profile, but its opening has been delayed following the downturn.

Scale is also a hallmark of the 3,500sqm Talise Spa, which includes 17 treatment rooms and two private suites.

A key design feature is the use of traditional Kuwaiti oriel windows of Mashrabiya design. Mashrabiya screens are also fitted in the bedrooms and can be pulled across the windows to provide privacy and shade.

The hotel contains six restaurants, along with a selection of cafes and lounges and despite the beachfront setting, Jumeirah will be targeting MICE business.

The centrepiece is the ‘Badriah’ – reportedly the largest ballroom in Kuwait – spanning 1,950sqm and wedding hall, with a private bridal suite.

In addition, two meeting halls, the Messilah ballrooms 1 & 2, measure 405sqm each and there are  five break-out rooms measuring 75sqm each.