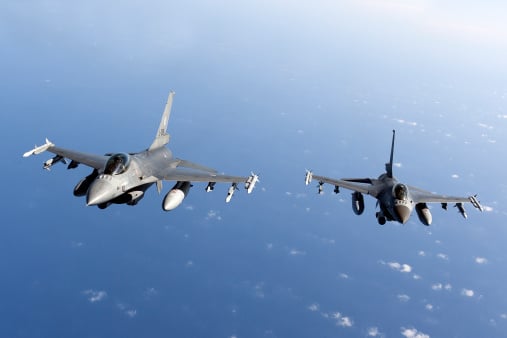 U.S. troops equipped with Patriot missiles and fighter jets began military exercises in Jordan that have drawn condemnation from Russia, which accuses the West of fanning the conflict in neighbouring Syria.

Washington confirmed last week it was sending the F-16 jets and missiles – which can be used against planes and other missiles – to its ally Jordan, and said it may consider keeping them there after the drills.

Both Washington and Amman said on Sunday the Eager Lion exercises were not related to the war in Syria, where President Bashar al-Assad’s air power has given him an edge over lighter-armed rebels.

But the Damascus government, and its most powerful ally Moscow, have been sensitive about any transfer of Western arms closer to the conflict, particularly any gear that could be used to enforce a no-fly zone.

More than 4,500 American troops, around 3,000 Jordanians, and 500 soldiers from Britain, Saudi Arabia and other countries were taking part in the exercises, less than 75 miles (120 km) from the Syrian border, said military officials.

“The drills having nothing to do with any objective related to what is happening in Syria,” the top army commander in charge of Jordanian troops, Major General Awni al-Adwan, told reporters during the launch of the exercises on Sunday.

U.S. Major General Robert G. Catalanotti told a joint news conference the Eager Lion events would increase “our ability to operate together in any upcoming contingency”.

The exercises also involved a number of F-18 jets from bases in the Gulf and drills on handling chemical strikes, which Syria’s government and rebels have accused each other of carrying out.

Jordan is one of a number of Arab countries that have lent support to the Syrian opposition, caught up in the two-year-old civil war.

Jordan, like Syria’s other neighbours, is increasingly nervous that the fighting will spill over and ignite a regional conflict.

U.S. President Barack Obama has been reluctant to become involved despite having called for Assad to resign and hinting at military action if the Syrian government crossed a “red line” by using chemical weapon. He has shown some willingness to protect friends in the region.

Jordanian officials privately say they requested that at least two Patriots are kept after the end of the exercises to guard against any missile attack from Syria.

Western diplomats say Washington has favourably responded to the request to bolster its ally’s security.

Russia complained again after Washington confirmed its deployment of missiles and jets to Jordan last week.

“We have more than once stated our opinion on this – foreign weapons are being pumped into an explosive region,” Russian Foreign Ministry spokesman Alexander Lukashevich said in a statement on June 4.

“This is happening very close to Syria, where for more than two years the flames are burning of a devastating conflict that Russia and its American partners are trying to stop by proposing to hold an international peace conference as soon as possible.”