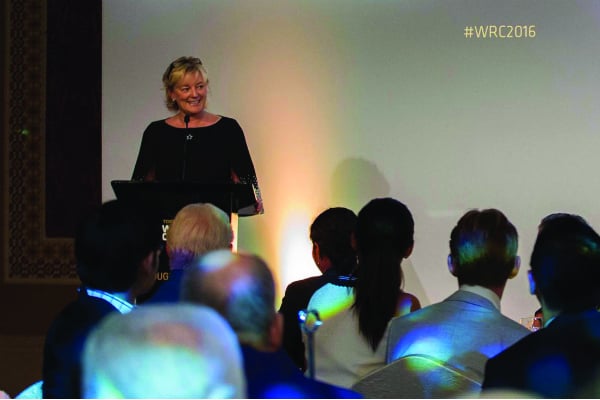 The name Jo Malone has become synonymous with scents and perfume and it is easy to see why.

From her approachable manner, to her demonstrable passion for fragrances, the woman behind the brand clearly lives and breathes her work.

And when we sit down to discuss her latest project, it is obvious she still has the nose for an industry she has dedicated much of her life to.

“It’s not always just about how something smells, but it’s the story behind it, the character of the fragrance. I describe and create these fragrances like they are people,” she says.

The British businesswoman paints a compelling story of creating a brand from scratch, building it up and then selling it when the time is right. And now she appears set to repeat at least steps one and two all over again.

The brand she founded – Jo Malone London – was forged from humble beginnings when she worked as a florist and beautician. What began with nutmeg and ginger bath oil ‘thank you’ gifts, made for clients, soon became a business in its own right and in 1994 Jo Malone opened its first boutique in London.

“A few years later, she had more than made a name for herself, opening a flagship boutique on London’s Sloane Square and catching the attention of the beauty industry.

“My husband and I had built it from absolutely nothing and it had grown and grown organically,” she recalls. “The world was watching us – we were growing before everyone’s eyes.”

That year, Malone and her business partner and husband Gary Wilcox made the decision to sell the brand to beauty giant Estée Lauder for an undisclosed – but rumoured to be significant – figure.

Surprisingly, the decision “wasn’t difficult at all” because the company had reached a point where its global expansion was proving beyond their means.

“When we sold we were starting to enter other markets. We went into the United States, we’d gone into Canada and we were looking at the Far East. You need a lot of money when you start to take your product out and you plant stores. You need teams, PR and legal to create the product.”

This made the prospect of teaming up with a global beauty brand all the more appealing.

“When we sold Jo Malone that’s what Estée Lauder was offering. They were offering the distribution, the know-how, the leadership and also the finance to be able to take it out.”

Under the deal, Malone stayed with the company as its chairwoman and creative director. And so began its international expansion, which resulted in boutiques seen across the Gulf Cooperation Council.

“When I signed that deal, I thought I was going to stay forever,” she recalls.

But then one piece of news changed everything. Two years into the new arrangement, Malone was diagnosed with a very aggressive form of breast cancer and was forced to spend a year away from work.

“It wasn’t something I anticipated and after I’d gone through all that cancer treatment I felt a very different person,” she says, revealing her concern that the cancer would come back, with a young family to care for.

“I was in Madison Avenue opening a Jo Malone store and I was standing in the corner and I felt like I was looking at someone else’s life and not my own,” she says. “It was absolutely the right time to go.”

The decision was a difficult one, as Malone did not want to see the business harmed or show disloyalty to Estée Lauder, which had acquired it in good faith. But, nevertheless, in 2006 she decided to leave the brand that bears her name behind.

As part of the deal, the businesswoman, who lives and breathes fragrances, was unable to enter the industry for five years and she admits there were second thoughts.

Much soul searching followed and Malone considered everything from buying a vineyard to owning a restaurant and even creating a television production company.

“But none of those things I was qualified to do. The only thing I know how to do brilliantly is make fragrances.”

It was only when she started to work with fragrances from home for pleasure that she realised it was where she belonged. After the five years were up in 2011 she launched her new brand, Jo Loves, with a selection of fragrances, scented candles and bath and body products. On her 50th birthday her husband then surprised her with the keys to its flagship store in London’s Belgravia, on the street where she had worked in a deli aged 16.

Malone admits much has changed since she took her first steps in the scent industry, including distribution and social media, but she appears excited by the new sense of freedom brands can enjoy.

And despite luxury being under pressure this year due to turbulent economic conditions she believes fragrances and beauty products will never lose their charm.

“It is a luxury product but if you went through every home most people would have a bottle of fragrance,” she says.

“Economic times change the way that we evaluate the way we spend our money, but often cosmetics makeup and things like that are a real feel-good product that doesn’t have to cost a fortune.”

Now, at the helm of Jo Loves, Malone is out to make a new name for herself and clearly she means business. When asked if she intends to make a brand as big as Jo Malone her intentions are as noticeable as a fine perfume.

“It was never about one shop,” she says. “When I sold my business I was financially secure, so I could have had a hobby. I could have just played with a few kilos of fragrance, I could have made Pomelo just for my friends and me. But that isn’t who I am and I love to build.

“This was always about building another global brand but not replicating my life from 20 years ago. I don’t want to do that.”

She is also in familiar territory. After three years perfecting and refining the brand, Malone is now preparing to take it global. Under a deal signed with online retailer Net-A-Porter in April, Jo Loves’ full range will be distributed across the world becoming available to international consumers, including those in the GCC, last month.

“We’ve got the blueprint right and the team right we’re ready to take the steps. But if we’d done it earlier I think we would have made some big mistakes and lost a lot of money,” she says.

The company’s expansion plans include more than just distribution with boutiques also in the works, Malone insists. However, regardless of whether it is in a freestanding location or part of a department store the businesswoman wants to make sure the brand stands out.

She describes the company’s existing location as a “tapas bar for the nose”, offering would be customers four courses designed to stir the senses. After a temporary stand attracted thousands of people during a two-day stop in Shanghai, China, as part of her role as a British ambassador for creativity, she appears confident in the concept. And, perhaps unsurprisingly, she admits there have been requests to bring it to the GCC.

“Everywhere I’ve gone they’ve said can we have a tapas bar here in Dubai?” she says.

“I think the people in this country really appreciate creativity, they love fragrance and they love Jo Malone, so they trust me, and it’s a really privileged relationship.”

The beauty industry will be watching as Britain’s queen of fragrance makes her return to the world stage.