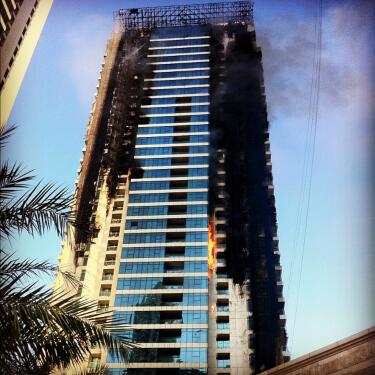 In the wake of the JLT fire in Dubai on Sunday, a report by a local comparison website shows a worryingly high number of residents in the United Arab Emirates do not have home contents insurance.

The survey by souqalmal.com shows that more than 86% of residents living in the country do not own the correct insurance. The average contents value of a home in the UAE is Dhs100,000 – Dhs150,000.

Furthermore a startling 52 per cent of those surveyed said they were not concerned about their lack of cover as they did not see it as a priority – a belief that may have changed following the fire at Tamweel tower.

The survey comes to light at a relevant time as all 160 apartments are unlivable following the blaze with tenants only starting to discover the extent of the damage inflicted on their homes and belongings.

Residents living in apartments that suffered the worst of the fire may well be left with nothing.

Commenting on the survey findings, Ambareen Musa, founder and CEO of souqalmal.com, said: “While these statistics are extremely alarming, they are not entirely surprising.

“Despite the recent spate of house fires in the Emirates which left some residents homeless, penniless and in huge debt, it seems the message still isn’t getting through. The majority of the people we spoke to still seemed to have the ‘it will never happen to me’ attitude.”

Apart from the fire and smoke damage residents of Tamweel Tower can expect to find when they’re allowed back into their homes, many may also be facing financial consequences from their landlords.

Legally, when a tenant signs a lease they are taking full responsibility for the property and any damage caused during their tenure.

The tenant is therefore responsible for any damage incurred, including fire or water related – depending on individual contracts and its clauses – meaning tenants can rack up huge debts to their landlords.

“Whether a tenant or a home owner – you need to know the facts and ensure that both you and your home are protected,” says Musa.

“My advice – don’t bury your head in the sand. It only takes a burst pipe while you are away this holiday season. Think of the damage that could be done to your home and its contents.”

Despite the low number of people owning home insurance, the survey found 95 per cent said they understood the value in insuring the contents of their home. However 10 per cent claimed they did not know how to get insurance.

Also read: How To Insure Your Home In The Gulf