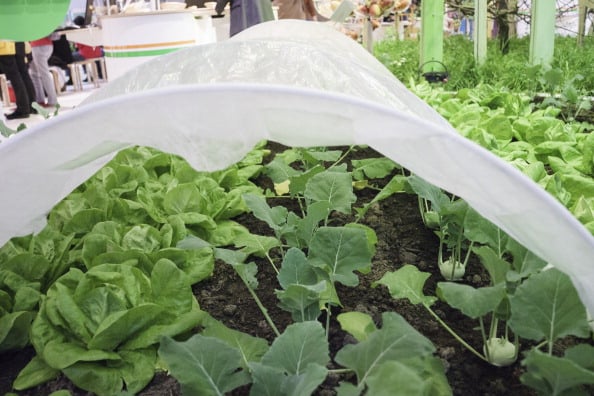 According to experts, agriculture in the UAE makes “no sense at all” as it contributes less than one percent to the economy while using more than 60 per cent of the country’s water.

As per the UN Food and Agriculture Organisation, the UAE lost 42 per cent of its renewable water resources between 1992 and 2007 and approximately $100 billion (Dh367bn) is estimated to be spent on desalination investments across the GCC from 2011 to 2016. Though a lot of that water will end up being used in agriculture, it will come at a high price.

Recognising the risks involved in a future without enough water and soil resources, companies and inventors have engineered what can be called a step towards a revolution in farming.

Soil-less farming or ‘film farming’ has been made possible with hydrogel technology. The technology reduces up to 90 per cent water consumption and 80 per cent fertiliser use, resulting in a productivity boost of 50 per cent.

The film can be used in any geographical area and weather conditions. The hydrogel-based IMEC film and the hydrophilic booster, SkyGel – a super absorbent polymer acts as a reservoir holding water up to 1,000 times its weight. The IMEC film and SkyGel are developed specifically to reduce the use of water, increase plant productivity and crop yield, while producing a best in class nutritious and healthy food that is highly rich in sugars, GABA and Lycopene.

The technology was officially launched in the UAE in 2012 by its Dubai-based owners, agricel.

The film was invented by Prof Dr Yuichi Mori of Waseda University, Japan. He is also the chairman of the Advisory Board of agricel.

The ‘film farming’ system can be installed on any surface – wood, sand or concrete – and across any terrain – from a dry arid desert to existing fertile farms or even in space.

Co-founder and CEO of agricel Yalman A Khane said, “The technology allows us to farm in a sustainable manner commercially, in turn producing nutritionally superior and safe food while reducing the use of harmful chemicals in the food supply chain. We can now grow cherry tomatoes in the middle of the desert.”

While film farming is new to the UAE, the technology has already been adopted across 180 farms in Japan.

Since its launch agricel has signed contracts with several local players to integrate film farming into the UAE’s farm sector.

Speciality foods and fruits like cherry tomatoes, lettuce, cucumbers and melons, and spices like paprika thrive on the film.

The company’s innovative film farming technologies have proven to be more cost effective than alternative farming methods, generating an ROI (return on investment) of between 40 per cent to 70 per cent and an IRR (the initial return rate) north of 58 per cent.

All kinds of crops can be grown on the film, except vegetables grown underground like potatoes, ginger and onions.

Electronics giant Sharp is cashing in on the Middle East’s penchant for sweet strawberries by growing them indoors in Dubai.

The firm is using technology to allow the fruit to be grown from seedlings at a facility in the UAE by artificially controlling light, temperature and humidity – thus avoiding the problems of berries spoiling during shipping. LED lights are being used to facilitate photosynthesis.

“If we can generate results in cultivating strawberries, a plant that is difficult to grow, we can apply the technology to other farm products,” said a company official.

Sharp has invested roughly $100,000 to build the laboratory test facility in Dubai. Sharp is now beginning testing of the operation with the aim of growing up to 3,000 strawberries a month, ahead of a planned factory-scale launch in 2015.