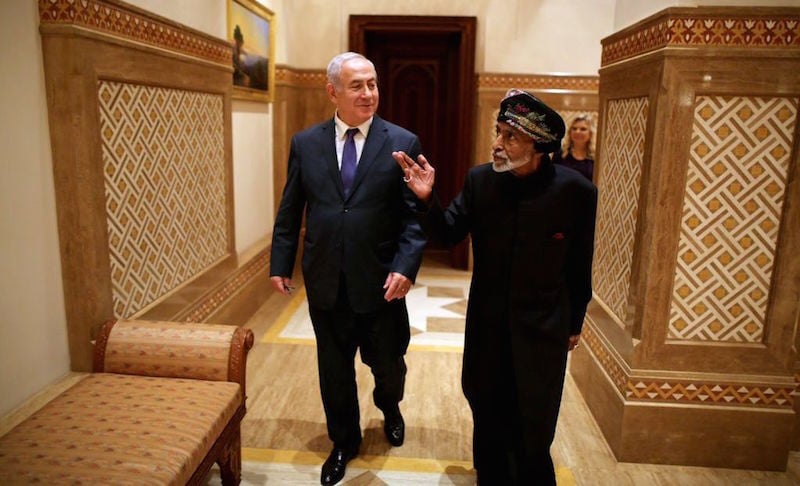 The rare visit by an Israeli leader to Oman — which was not publicised beforehand — comes days after Palestinian President Mahmoud Abbas paid a three-day visit to the Gulf country and also met Qaboos.

Netanyahu was accompanied on Friday by senior officials, including the head of the Mossad intelligence agency and his national security adviser.

“Among the issues discussed were ways to advance the peace process in the Middle East as well as several matters of joint interest regarding the achievement of peace and stability in the Middle East,” said a joint statement by the two leaders that was issued in English by Netanyahu’s office.

Though uncommon, Israeli leaders have previously visited the Gulf state.

In 1996, the late Shimon Peres went to Oman and Qatar when he was prime minister and opened Israel trade representative offices in both Gulf countries. His predecessor, the late Yitzhak Rabin, made the first trip to Oman in 1994.

Earlier this year, Omani foreign minister Yusuf bin Alawi made a rare visit by such a senior Arab official to Jerusalem’s Al-Aqsa Mosque.

Netanyahu has on several occasions hinted at warmer ties with Gulf states.

He told Israel’s parliament last week that due to fears of a nuclear threat from Iran, “Israel and other Arab countries are closer than they ever were before.”

In another sign of improving relations, Israeli Sports Minister, Miri Regev flew to Abu Dhabi where Israel’s judo team was participating in a major tournament.