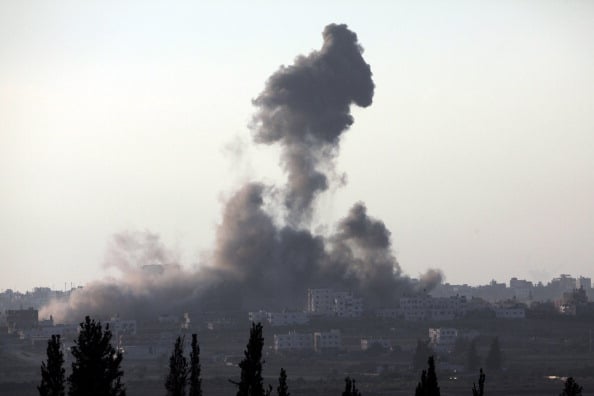 Renewed Israeli shelling killed at least 30 people in Gaza on Sunday after Prime Minister Benjamin Netanyahu vowed to keep up pressure on Hamas even after the army completes its core mission of destroying a tunnel network that extends into Israel.

Israel declared dead a soldier feared abducted by Hamas militants and repositioned its troops in the Gaza Strip, telling many residents they could return home after entire neighbourhoods were devastated in nearly a month of fighting.

In Cairo, a Palestinian delegation arrived for new truce talks. Turning its back on those negotiations after previous attempts to end the conflict failed, Israel said it would not send envoys as scheduled.

Israel intensified attacks in the area of Rafah along the border with Egypt, where 23-year-old officer Hadar Goldin was feared captured there on Friday, shortly after a previous ceasefire had taken effect.

The military later said Goldin, who was dragged by militants into a tunnel after two of his comrades were killed by a suicide bomber, had also died in action.

“The findings on the ground, the items that we found led us to the conclusion that he was killed in the initial attack,” said military spokesman Lieutenant-Colonel Peter Lerner.

Lerner said that ground forces were being redeployed in the Gaza Strip, though he gave no details their new positions, and added that residents from a number of evacuated neighbourhoods had been told they can return.

More than 30 tunnels and dozens of access shafts have been unearthed and were being blown up.

“We have proceeded with the mission in order to eliminate those (tunnels) that we have found and we expect to complete that within a short period of time, probably within the next 24 hours or so,” he said.

Israel began its air and naval offensive against Gaza on July 8 following a surge of cross-border rocket salvoes by Hamas and other guerrillas, later escalating into ground incursions.

Shelling exchanges continued on Sunday, pushing the Gaza death toll given by Palestinian officials to 1,708, most of them civilians. Israel has confirmed that 64 soldiers have died in combat, while Palestinian shelling has also killed three civilians in Israel.

At least 30 Palestinians in Rafah were killed by Israeli fire on Sunday, including nine from the same family, hospital officials said.

The talks in Cairo, without Israeli participation, were unlikely to produce any breakthrough, as Israel and Hamas’ positions remain far apart.

Israel says it must be allowed to act against Hamas’ rocket arsenal and tunnel network in the framework of any long-term truce. Hamas, sworn to Israel’s destruction, demands Israel withdraw its troops and a lifting of the blockade that has choked Gaza’s economy.

Israeli Justice Minister Tzipi Livni, a member of Netanyahu’s decision-making security cabinet, said any agreement on the issue was still far off.

“You want to talk about lifting the blockade? Not with us, and not now,” she told the news website Ynet TV.

Crowded Gazan towns close to the Israeli border have seen destructive clashes and the flight of tens of thousands of Palestinians as tanks and troops swept in to confront dug-in guerrillas.

The Palestinian Centre for Human Rights said 520,000 people had been displaced by the fighting – more than a quarter of Gaza’s population.