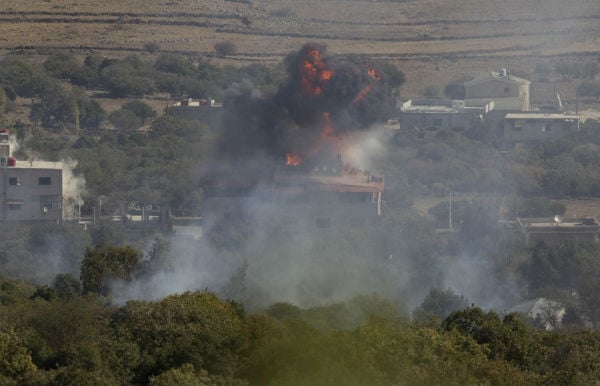 Israeli forces fired into Syria on Sunday in what the military called a warning, after stray munitions from fighting between Syrian troops and rebels hit the Israeli-occupied Golan Heights.

The incident, described by Israel Radio as the first direct engagement of the Syrian military on the Golan since the countries’ 1973 war, highlighted international fears that Syria’s civil war could ignite wider regional conflict.

An Israeli security source said the military fired in the direction of a Syrian army mortar crew that had launched a shell which overshot the Golan disengagement fence on Sunday, exploding near a Jewish settlement without causing casualties.

In a statement, the Israeli military said soldiers had “fired warning shots towards Syrian areas”.

“The IDF (Israel Defence Force) has filed a complaint through the UN forces operating in the area, stating that fire emanating from Syria into Israel will not be tolerated and shall be responded to with severity,” the statement said.

There was no immediate comment from the 1,000-man United Nations Disengagement Observer Force which patrols the area.

Spillover violence this month from Syria onto the Golan has jangled the nerves of Israelis worried that the once-quiet front will add to threats facing the Jewish state from Islamic militants in neighbouring Lebanon, Gaza and Egypt’s Sinai.

There have been similar worries in Turkey, Jordan and Lebanon about incidents on their own borders with Syria, where forces loyal to President Bashar al-Assad have been battling rebels for 19 months.

Interviewed by Israel’s Army Radio earlier on Sunday, Defence Minister Ehud Barak was asked about public warnings he and another senior official issued to Assad last week to rein in Syrian sweeps against rebels near the Golan.

“The message has certainly been relayed. To tell you confidently that no shell will fall? I cannot. If a shell falls, we will respond,” Barak said, without elaborating.

Prime Minister Benjamin Netanyahu, also speaking before Sunday’s mortar strike on the Golan, told his cabinet that Israel was “closely following what is happening on our border with Syria .. and (is) prepared for any development”.

Israel captured the Golan in the 1967 Middle East war and annexed the strategic plateau in 1981, a move not recognised internationally. In all past peace talks with Israel, Syria has insisted on the Golan’s return.

The two countries signed a disengagement agreement in 1974, a year after another Arab-Israeli conflict, and though they are still technically at war the Golan had been mostly quiet since.

Another Syrian mortar bomb, one of a salvo, struck a Golan settlement on Thursday but did not explode. Separately, Israel complained to the United Nations this month after three Syrian tanks entered the Golan demilitarised zone, and said one of its army jeeps had been hit by Syrian gunfire. No one was hurt.

Israel has tried to stay out of the insurgency next door, reluctant to be drawn into another war and unclear about whether a post-Assad Syria might prove more hostile.

But Barak has said he hopes the rebels will win, Assad will fall and “a new stage in the life of Syria will begin”.

Israel’s military chief, Lieutenant-General Benny Gantz, warned troops on the Golan Heights a week ago: “This is a Syrian issue that could become our issue.”