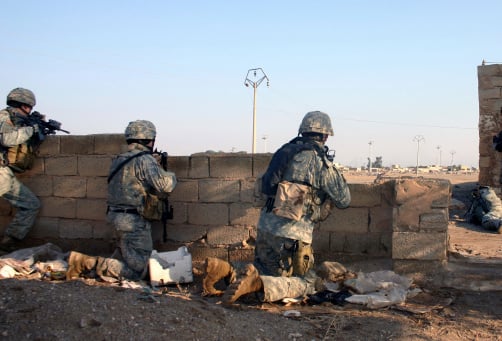 Islamic State, the al Qaeda spin-off that seized wide swathes of Iraq almost unopposed last month, has released a video telling Iraqi soldiers who may still have some fight in them that they risk being rounded up en masse and executed.

Iraq’s army unravelled when the Sunni insurgents staged a lightning advance through northern towns and cities, building on territory their comrades captured earlier in the west of the country, a major OPEC oil producer.

Thousands of soldiers fled, prompting Iraq’s top cleric to call on compatriots to take up arms against the radical faction that has declared a mediaeval-style caliphate in parts of Iraq and Syria and aims to march on the capital Baghdad.

The 30-minute video clip, circulated during the holiday that marks the end of the fasting month of Ramadan, sheds light on what tactics the Islamic State is likely to employ as it presses ahead with its campaign.

After sweeping through a town with quick-hit raids, the militants are filmed standing over dozens of terrified, handcuffed Iraqi soldiers.

One fighter mocks a soldier for wearing civilian clothes over his uniform out of fear of being identified and killed. He pleads for mercy, to no avail.

Then dozens of soldiers are led to a sandy desert pit. They are executed one by one – bullets from AK-47 assault rifles pumped into their heads.

Not satisfied that all are dead, an Islamic State fighter makes one last round, opening fire again, one by one.

Others are led to the edge of a river. Each one is shot in the head with a pistol and then shoved in, the executioner standing in a large pool of blood.

The mission begins with an Islamic State commander firing up militants with promises that paradise in heaven awaits them if they take the city of Samarra, which is 100 km (62 miles) north of Baghdad and would be their next target in a southward push.

He tells them that God “made us proud when he permitted us to go to jihad”.

It was not clear where or when the video was filmed.

The footage features night-vision sequences, then shows fighters moving into a city in flat-bed trucks, and U.S-made Humvees seized during their surge through the north last month.

Some fighters are on foot, darting towards government buildings on sandy roads. As the Islamic State gains ground small units in trucks pull up beside vehicles during daytime and open fire on passengers who lose control of their vehicles.

Several militants walk up to a van and empty their AK-47s through the windows, to make sure the job is done.

Then the camera focuses on Iraqi security forces in watchtowers. One by one they are picked off by Islamic State snipers, who seem to avoid heavy clashes and rely instead on quick, small operations combined with psychological warfare.

An insurgent can be heard weeping in joy as he declares that Samarra now belongs to the group.

Residents and security sources say Baghdad Shi’ite Muslim-led government remains in control of Samarra so this footage may have come from another city or town seized by the Islamic State.

Nevertheless, it illustrates the thinking of the Islamic State, which aims to redraw the Middle East map although it appears to have paused its territorial thrust for now in favour of consolidating recent gains north of Samarra.

Its sudden rise has deepened Sunni-Shi’ite sectarian tensions in Iraq, raising fears that the country will relapse into the dark days of civil war that peaked in 2006-2007.

Shi’ite militias now rival the government army in their ability to confront the Sunni insurgents.

After the soldiers are executed, the Islamic State video shows fighters blowing up Shi’ite shrines or bulldozing mosques, as well as residents of the town welcoming fighters.