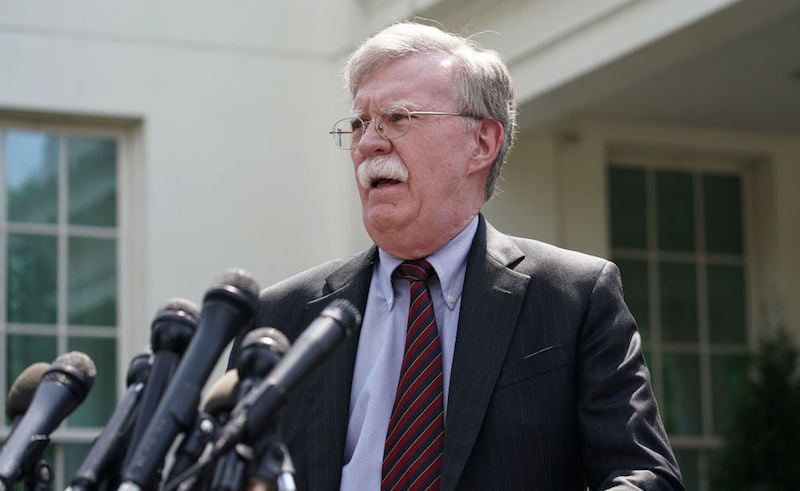 US National Security Adviser John Bolton said on Wednesday that naval mines “almost certainly from Iran” were used to attack oil tankers off the United Arab Emirates this month, and warned Tehran against conducting new operations.

Bolton said the “prudent and responsible” approach taken by the United States, which has beefed up its military presence in the region, had made it clear to Iran and its proxies that such actions risked a “very strong” U.S. response.

He was speaking to reporters in Abu Dhabi ahead of emergency summits of Arab leaders in Saudi Arabia on Thursday called to discuss the implications of the tanker attacks, and drone strikes two days later, on oil pumping stations in the kingdom.

The UAE has not yet blamed anyone for the sabotage of four vessels, including two Saudi tankers, near Fujairah emirate, a major bunkering hub just outside the Strait of Hormuz.

Riyadh has accused Tehran of ordering the drone strikes, which were claimed by the Iran-aligned Houthis who have been battling a Saudi-led coalition in Yemen in a four-year conflict seen as a proxy war between Saudi Arabia and Iran.

“I think it is clear these (tanker attacks) were naval mines almost certainly from Iran,” Bolton said without providing evidence. “There is no doubt in anybody’s mind in Washington who is responsible for this and I think it’s important that the leadership in Iran know that we know.”

He declined to comment on the specifics of the investigation into the attacks in which the United States, France, Norway and Saudi Arabia are taking part, but said those other countries and ship owners involved could do so.

A UAE bunker barge and a Norwegian-registered oil products tanker were also hit. France has a naval base in Abu Dhabi.

Bolton said the tanker attacks were connected to the strike on oil pumping stations on the kingdom’s East-West pipeline and a rocket attack on the Green Zone in the Iraqi capital Baghdad.

He said there had been a fourth unsuccessful attack on Saudi Arabia’s Yanbu port a few days before the tanker operation but that it was unclear if it was linked to the others. Saudi officials were not immediately available to comment.

Tensions between the United States and Iran have escalated since President Donald Trump withdrew from a 2015 multinational nuclear pact with Iran and reimposed sanctions, notably targeting Tehran’s key oil exports. Iran says it will not be cowed by what it has called psychological warfare.

Iranian President Hassan Rouhani signalled on Wednesday that talks with the United States might be possible if Washington lifted sanctions and met its commitments under the nuclear deal, state television said.

Sunni Muslim allies Saudi Arabia and the UAE have backed sanctions against Shi’ite Iran, a fellow OPEC producer but a regional foe, and have lobbied Washington to contain Tehran.

Bolton said the United States was discussing next steps with Gulf allies and the goal was “to make it clear to Iran and its surrogates that these kind of activities risk a very strong response from the Americans.”

Washington said it was sending 1,500 troops to the region after speeding up deployment of an aircraft carrier strike group and sending bombers and additional Patriot missiles.

“We are very concerned about the Quds Force and Qassem Soleimani using Shi’ite militia groups and others in Iraq as indirect ways to attack our embassy in Baghdad, consulate in Erbil, our various bases around the country,” he said.

The U.S. Combined Air Operations Center is based in Qatar and its navy Fifth Fleet in Bahrain. The U.S. air force also uses al-Dhafra airbase in Abu Dhabi.