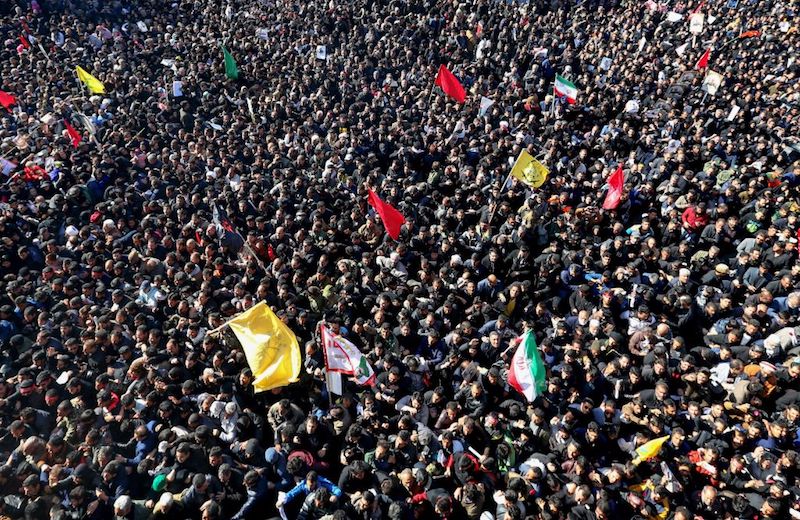 Iran fired more than a dozen missiles at US-Iraqi airbases, a direct attack on American forces in the region that risks further action from President Donald Trump after a US air strike killed top Iranian general Qassem Soleimani last week.

The elite Islamic Revolutionary Guard Corps claimed responsibility for the barrage, which the Pentagon said was launched from Iran. Fifteen missiles were fired, 10 of which hit the Ayn al-Asad base in western Iraq and another facility in Erbil, according to two US officials. Another struck the Taji air base near Baghdad while four fell out of the sky.

Stocks dropped and oil rose on news of the Iranian strike, though crude later pared its gains. The big question is the extent of any US casualties, because that is likely to influence the White House thinking on potential retaliation. For now it’s not clear if there were any fatalities and the Pentagon said the bases had already been on high alert.

Some sort of response had been expected to the killing of Soleimani, who ran Iran’s proxy operations across the Middle East and was close to the country’s leaders. While Tehran does not want outright war with the US, there was growing pressure at home to react. The balancing act was to do so without tipping things into a conflict that no-one has appetite for.

“We do not seek escalation or war, but will defend ourselves against any aggression,” Zarif wrote.

In Tehran the mood early Wednesday was cautious, with ordinary people taking to Twitter to voice their fears of a war.

President Donald Trump tweeted “All is well!” and “So far, so good!” while adding that battle damage assessments continued. He added he’ll make a statement Wednesday morning. Tensions between Iran and the US have soared under Trump, who walked away from the Iranian nuclear deal agreed by his predecessor. Since then, Iran has warned repeatedly the restraints on its nuclear program will be removed.

One White House official, who spoke on condition of anonymity, said the early thinking was the missile strike was a perfunctory move that would let Iran retaliate without incurring a potentially devastating US counter-assault.

Iran’s attack sent futures on the S&P 500 Index down as much as 1.7 per cent before paring losses. Gold initially advanced to the highest since 2013, though those gains were trimmed along with an advance in oil which at one point surged above $65 a barrel.

U.S. aviation regulators issued new restrictions barring civilian flights over Iraq, Iran, the Persian Gulf and the Gulf of Oman. Adding to the confusion, a Boeing Co. 737 jet carrying 180 passengers and crew headed for Ukraine crashed in Iran due to technical problems shortly after takeoff, according to local media.

WATCH: This is the moment when missiles are launched to Iraq’s Ain Assad air base housing U.S. troops, according to Iranian State TV

“A missile attack from Iran against US forces is a serious escalation,” said Michael Singh of the Washington Institute for Near East Policy and a former senior director for Middle East affairs under President George W. Bush. Such an attack “cannot be regarded as merely symbolic or face-saving regardless of its results,” he added.

Trump has shown restraint in previous attacks in the region blamed on Iran that didn’t kill any US citizens. But Iran’s quick claim of responsibility for the strike and the targeting of US military outposts make some sort of retaliation more likely.

“The next question is, does the US react or overreact to this,” said Jarrett Blanc, a senior fellow at the Carnegie Endowment for International Peace and a former State Department coordinator for Iran nuclear implementation.

Iran is believed to have the region’s largest stockpile of short-range ballistic missiles, and a large number of American military and diplomatic facilities in the region were seen as potential targets for reprisals.

“As we evaluate the situation and our response, we will take all necessary measures to protect and defend US personnel, partners, and allies in the region,” according to a Pentagon statement.

House Speaker Nancy Pelosi was in a closed-door meeting with fellow Democrats when she was handed a note about the attack as the lawmakers were discussing Trump’s impeachment. She left the room after telling her colleagues to “pray,” Representative Debbie Dingell said.

The Ayn al-Asad base is a key US facility in the country. Pence visited it late last year and Trump was there in December 2018.

The Islamic Revolutionary Guard Corps said that further responses will come. It called the attack the start of its “Martyr Soleimani” operation, in honor of a leader many Iranians considered a national hero for his exploits in conflicts from Syria to Yemen.

At his funeral on Tuesday, Hossein Salami, leader of Iran’s Revolutionary Guard, threatened to “set ablaze” places supported by the US, the Associated Press reported. The general’s burial was postponed after dozens of mourners died in a stampede.

Even so, Zarif’s comments cast some doubt on about whether more action is really in the works. Iran has for years operated a carefully-calibrated strategy of attacks, often via proxies, in the Middle East, that preserves its influence without drawing major retaliation. Crippled by economic sanctions, Iran can ill-afford an outright war.

Before the latest attack, Iran said it was assessing 13 scenarios for retaliation according to comments by Ali Shamkhani, head of Iran’s national security council, reported by the semi-official Fars news agency. “The entirety of the resistance forces will retaliate” for Soleimani’s killing, he said. The council later denied he had spoken to the media, Iran’s state news agency reported.

Iran “needed to do something quick,” said Kamran Bokhari, founding director of the Center for Global Policy in Washington. “This is a placeholder move and a low cost one.”

The US had vowed a quick and overwhelming response to any Iranian attacks. Over the past week, the Pentagon deployed about 3,500 soldiers from the 82nd Airborne to Kuwait and another three Navy ships with about 2,200 Marines to the Persian Gulf region.

Iranian-only targets for the US include Islamic Revolutionary Guard Corps navy vessels in the Persian Gulf, nuclear facilities, military bases, ports and oil installations, according to a Tuesday report by the Congressional Research Service. Another option: Iranian proxies.

U.S. officials say they were justified in targeting Soleimani, who was accused of having helped Iraqi insurgents target American troops with improvised explosive devices following the US invasion in 2003.

Drone Strike
Tensions between the US and Iran soared following a December 27 rocket assault on an Iraqi base. It killed an American contractor and wounded several US personnel. The US put the blame on Kataib Hezbollah, an Iraqi militia closely associated with Iran.

On December 29, the US conducted air strikes on five bases in Iraq and Syria used by Kataib Hezbollah. Two days later, dozens of Iraqi militiamen and their supporters stormed the U.S. embassy complex in Baghdad. The US responded with the drone strike on Soleimani.

Defense Secretary Mark Esper said Tuesday that attacks planned by Soleimani, who headed the Revolutionary Guard’s Quds Force, were “days away” when the U.S. struck.

“We got it right,” Pompeo told reporters on Tuesday. “And the president had an entirely legal, appropriate, and a basis, as well as a decision that fit perfectly within our strategy and how to counter the threat of malign activity from Iran more broadly.”