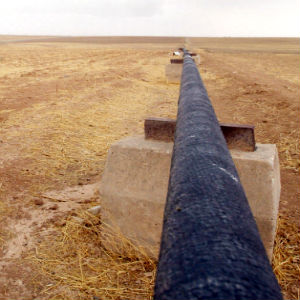 Iran may join the Trans Anatolian Pipeline (TANAP), which will carry Azeri gas to European markets, the country’s ambassador to Azerbaijan said on Wednesday referring to the project, which is seen as Europe’s alternative to its reliance on Russia.

“We may buy equity in the pipeline, if we reach our production targets by 2018.”

TANAP envisages carrying 16 billion cubic metres (bcm) of gas a year from Azerbaijan’s Shah Deniz II field in the Caspian Sea, one of the world’s largest gas fields, which is being developed by a BP -led consortium.

The 1,850 kilometre pipeline will run from the Turkish-Georgian border to Turkey’s border with Bulgaria and Greece. The preliminary cost has been estimated at $10-$11 billion.

The project was inaugurated in March and is expected to be completed by the end of 2018 in order to start deliveries of gas from Shah Deniz II to Europe in 2019-2020.

The Balkan states hope to benefit from the TANAP project, which will connect to the Trans-Adriatic Pipeline (TAP) that will bring gas to Europe via Italy, through Albania.

The TAP spokeswoman said in April that the project was open to new shareholders, including Iran.

Azeri officials also do not rule out that Iran may join the project for Azeri gas exports to Europe and use TANAP.