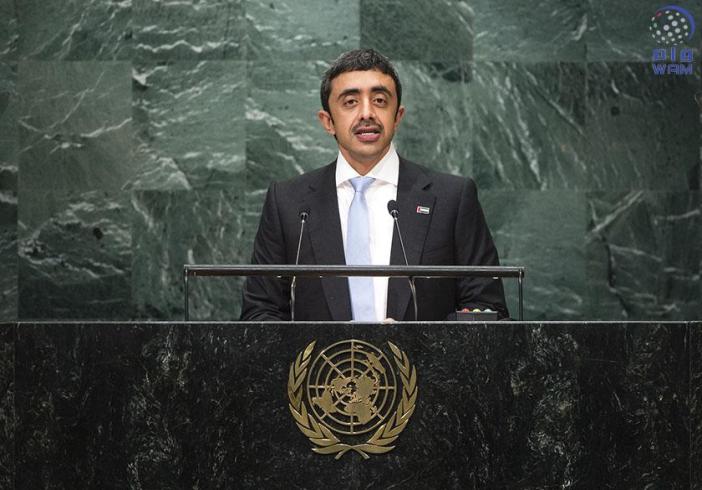 A dispute with Iran over the ownership of three islands in the Arabian Gulf is a “core national issue” for the UAE, the country’s minister of foreign affairs has said.

H.H. Sheikh Abdullah bin Zayed Al Nahyan argued the occupation of Greater Tunb, Lesser Tunb and Abu Musa was against international law and the United Nations charter in a speech at the 71st UN General Assembly in New York.

“My country has called, and continues to call on, our neighbour Iran, to return the occupied islands to their rightful owners either voluntarily or through peaceful means, particularly through international justice or arbitration, in order to maintain friendly relations and good neighbourliness in the Arabian Gulf region,” he said, according to UAE state news agency WAM.

“We also affirm that my country will never give up its sovereign right over these islands, and this approach emphasises the UAE’s insistence on the principles of international law.”

The ownership of the three islands, which sit near important shipping lanes, has been the subject of a longstanding diplomatic dispute between the two countries.

They were seized in 1971 by the Shah of Iran, just days before the formation of the UAE, having previously been occupied by the British Empire and placed under the administration of the emirate of Sharjah in 1921.

In the past Portugal and various Iranian rulers have also occupied them.

Iranian Foreign Ministry Spokesman Bahram Qassemi responded to the foreign affairs minister’s speech on Sunday by accusing the UAE of trying to divert attention and blame Iran for regional instability.

This attracted a Twitter comment from Dr Anwar bin Mohammed Gargash, UAE minister of state for foreign affairs, that was highlighted by WAM.

“The routine and unconvincing denial of these facts by the spokespersons of Iran’s Ministry of Foreign Affairs has become something monstrous because Iran’s neighbours are suffering now from its interference. Acknowledging this would constitute half of the solution,” he said.

Last week the foreign ministers of the other Gulf States rejected Iran’s occupation of the islands and made similar calls for the two countries to resolve the dispute through negotiations or international arbitration.

Iran has claimed the islands were returned to it based on an agreement signed before the formation of the UAE and has repeatedly declared its ownership is non-negotiable.