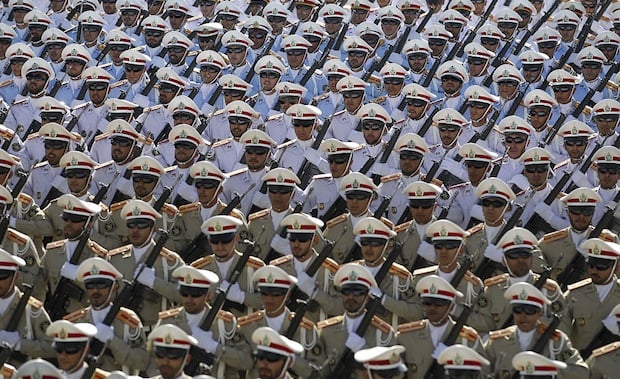 Iranian lawmakers approved plans on Monday to expand military spending to 5 per cent of the budget, including developing the country’s long-range missile programme which U.S. President-elect Donald Trump has pledged to halt.

The vote is a boost to Iran’s military establishment – the regular army, the elite Islamic Revolutionary Guard Corps (IRGC) and defence ministry – which was allocated almost 2 per cent of the 2015-16 budget.

But it could put the Islamic Republic on a collision course with the incoming Trump administration, and fuel criticism from other Western states which say Tehran’s recent ballistic missile tests are inconsistent with a U.N. resolution on Iran.

The resolution, adopted last year as part of the deal to curb Iran’s nuclear activities, calls on Iran to refrain from work on ballistic missiles designed to deliver nuclear weapons. Tehran says it has not carried out any work on missiles specifically designed to carry such payloads.

Tasnim news agency said 173 lawmakers voted in favour of an article in Iran’s five-year development plan that “requires government to increase Iran’s defence capabilities as a regional power and preserve the country’s national security and interests by allocating at least five per cent of annual budget” to military affairs.

The Obama administration says Iran’s ballistic missile tests have not violated the nuclear agreement with Tehran, but Trump, who criticised the accord as “the worst deal ever negotiated”, has said he would stop Iran’s missile programme.

“Those ballistic missiles, with a range of 1,250 miles, were designed to intimidate not only Israel … but also intended to frighten Europe and someday maybe hit even the United States,” he told the American Israel Public Affairs Committee AIPAC in March. “We’re not going to let that happen.”

The increase in military spending is part of a growth plan for 2016-2021 first announced in July 2015 by the Supreme Leader Ayatollah Ali Khamenei.

Khamenei supported last year’s nuclear deal with world powers that curbed Iran’s nuclear programme in return for lifting of international sanctions. However, he has since called for Iran to avoid further rapprochement with the West, and maintain its military strength.

Iran has test-fired several ballistic missiles since the nuclear deal and the U.S. Treasury has imposed new sanctions on entities and individuals linked to the programme.

Former U.N. Secretary-General Ban Ki-moon said last year that the missile launches were “not consistent with the constructive spirit” of the nuclear deal, but did not say whether they actually violated the U.N. resolution.

The United States, Britain, France and Germany wrote to Ban in March about the missile tests, which they said were “inconsistent with” and “in defiance of” the council resolution.

Most U.N. sanctions on Iran were lifted after the deal but Iran is still subject to a five-year U.N. arms embargo – unless approved in advance by the U.N. Security Council.

Although the embargo is not technically part of the nuclear agreement, the U.N. resolution enshrining the deal requires the U.N. Secretary-General to highlight any violations.

In a report submitted to the Security Council before he was succeeded by Antonio Guterres on Jan. 1, Ban expressed concern that Iran may have violated the embargo by supplying weapons and missiles to Hezbollah.

The Lebanese Shi’ite organisation is one of several groups backed in the Middle East by mainly Shi’ite Iran in its regional rivalry with Sunni Muslim Gulf Arab states, a competition for influence that is played out in conflicts or power struggles in Syria, Iraq, Lebanon and Yemen.