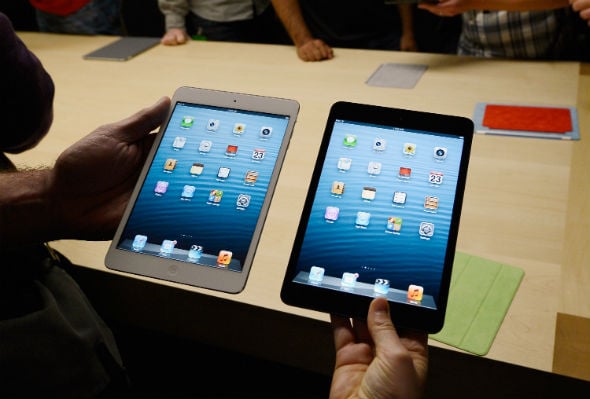 The iPad Mini is set to finally go on sale across the UAE on Thursday as both Virgin megastores and iStyle outlets will launch the latest version in Apple’s tablet range.

Customers of iStyle – an official Apple retailer – have been sent SMS messages with details about the launch, due to take place at 7pm.

The release marks a triple-header for Apple in the region as the latest full-size Apple tablet, the iPad 4, is also due to go on sale at the same time while the iPhone 5 is launching across Thursday and Friday.

Speaking to Gulf Business when the new tablets were announced earlier this year, Ashish Panjabi, the COO of electronic retailer Jacky’s said: “As a retailer, I know I’m excited. The buzz around the iPad’s has been immense, especially for the smaller factor device.”

The iPad Mini will have a 7.9-inch screen that boasts the same resolution as the iPad 2, while measuring 7.2mm and weighing 308g.

It is made of aluminium with the same finish as the iPhone 5 with white models featuring an aluminium back and the black types with the same coating as its similar-coloured iPhone sibling.

But the light-weight tablet is heavy on the wallet; Apple announced that pricing for the iPad mini will start from $329 for the 16 GB, increasing to $429 for 32GB.

While several online commentators have expressed concern over the pricing, Panjabi feels the cost is justified.

“Apple probably quite rightfully feels they can charge a premium for the product,” he said. The iPad mini looks unique and a lot of thought has gone into designing the product, he said.

“The problem with many of the 7-inch Android tablets today is that they vary largely in terms of engineering quality, finish, screen resolution and user experience. Most of them are black slabs and if you were to cover the brand names on most tablets, you couldn’t tell the difference between one and the other,” he added.

According to Panjabi, Apple has also never played to mass market pricing.

“Their Macbooks are often more expensive than that of most PC vendors. Their smartphones have also always been priced at a premium. Apple for example never entered the netbook race when it started a few years ago and decided to launch products like the Macbook Air or iPad instead at a premium.

“There is an aspirational value that Apple has managed to derive from consumers and this was somewhat expected to continue with the new iPad Mini as well,” he added.

Despite the steep pricing, the iPad mini should do well in the UAE, said Panjabi, and so should the fourth generation of the iPad, which comes packed with a new A6X processor and improved CPU and graphic performance.