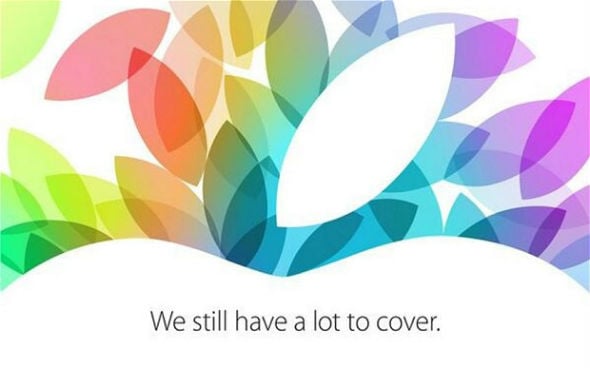 The media invites read: “We still have a lot to cover” with a close-up image of half the Apple logo, amid a background of bright colours.

The launch, on Tuesday October 22, comes roughly one year after the unveiling of the previous generation of the company’s tablet devices.

Experts are predicting that the iPad 5 and new iPad Mini will feature new processors, hardware upgrades and improved cameras.

The new unveilings could have a significant impact on Apple’s ability to preserve its market share after recent competition from the Google Nexus 7, Amazon Kindle Fire HD and the Samsung Galaxy tablet.

The new iPad Mini is expected to come with a new retina display – which already exists on the iPad 4 – and possibly in a range of colours, similar in style to Apple’s recent iPhone 5C.

Both new tablets are expected to feature the new fingerprint technology Apple unveiled on the iPhone 5S, while the iPad 5 is predicted to be lighter and thinner than its predecessor.

The Apple event may also be used to launch new Mac Pros, MacBook Pros and a new operating system.