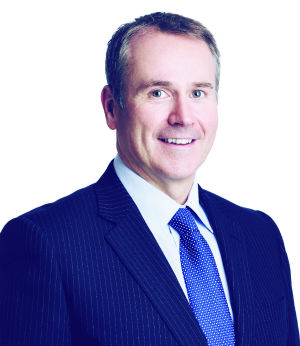 When Kyle Whitehill took up the reins of Vodafone Qatar in April 2013, he knew he had three key commitments to make good on.

The first was to make a company that people could be proud of. The second commitment was to deliver a clear return to shareholders. And finally, to bring competition to the marketplace across all segments. As the executive admits in a candid interview with Gulf Business, arguably all but the last have been achieved even as the firm has faced off with an incumbent the size of Ooredoo.

“When you look at two player markets your immediate assumption is that it should be much easier. In my experience, its significantly tougher because you don’t have anyone else to look at.”

Indeed, the Scot’s current market draws more parallels with his favourite team Glasgow Rangers, jostling with Celtic during its prime, than the six and 14 player competition he took on as CEO of Vodafone Ghana and COO of Vodafone India previously.

“Every single day we look at Ooredoo and every single day Ooredoo looks at us. Everything you do has a direct impact on the other operator. So you have to be very clear about your strategy.”

Making a mark on mobile

The struggle Whitehill has faced in challenging Ooredoo’s monopoly is clear in his voice as he describes some of the obtacles in expanding the telco’s mobile network, which launched in 2009.

This began with the telco being excluded from around 500 legacy sites in its sharing agreement, he says, while planning permission to build new sites was difficult to come by.

“We’ve been excluded from quite a few sites where strategically it’s important for us to have some physical presence. That’s where we’ve had a little bit of frustration. You want competition, so give us full access to network coverage.”

Equally, he argues, that while the telecom regulator tries to facilitate site sharing, Ooredoo, faced with losing market share, has no reason to be forthcoming.

“Incumbents tend to be a big block in slowing stuff like that down. So I don’t see any immediate resumption.”

Despite these setbacks, however, Vodafone has made its mark in Qatar’s mobile segment. In its Q3 results for the nine months ending December 31 2014, the telco reported an 11 per cent rise in mobile customers, to 1.414 million.

This gave the company 33.5 per cent of the mobile customer market share and 32 per cent of mobile revenue in the country.

“The first and most visible thing we’ve done is brought competition to the lower value mobile segment,” says Whitehill.

Indeed competition in the pre-paid segment has intensified, impacting Vodafone Qatar’s finances during the nine months to end-2014.

Now both sides are turning to the next battleground of high value customers. This includes the post-paid segment, which accounts for 10 per cent of Vodafone Qatar’s overall base, driven by enterprise customers.

“As the years have rolled by, and we are now in year six of operation, the game has changed quite significantly. The requirement is for us to move ourselves up the value chain, particularly in mobile…not just on price, because there is a lot more to it than just price in the high value segment.”

Despite Qatar having some of the highest SIM penetration in the world – estimated between 170 to 180 per cent – there is deemed to be plenty of growth potential in the market overall, with Whitehill planning to break ground with existing wealthy multiple SIM owners and new customers.

“The population has been growing around 11 per cent year on year. So we’re going to have 200,000 new people coming into the market for the foreseeable future. The population is about 2.4 million now and I think there is going to be a relentless march towards three to 3.5 million as large infrastructure projects become more visible.”

“In my mind, I can still take a fair share of the existing SIMs and I do regularly see more than 50 per cent of the new entrants into the market place.”

But if Vodafone has made inroads in Qatar’s mobile market, its major stumbling block, and barrier to being considered as comprehensive a provider as Ooredoo in Qatar, comes in the fixed line space.

Since launching fibre-based consumer and enterprise fixed-line services commercially in October 2012, the company has struggled to make a dent in its competitor’s long-established market share.

In December, Ooredoo reached 200,000 customers connected to its fibre broadband network, while it’s fixed market share stands at a whopping 98 per cent, according to Whitehill.

“In a monopolistic broadband environment, the networks aren’t good enough, the content is not good enough and you’re paying ten times as much as you would be in the UK or America. So to me that’s where the focus of competition improvement should be.”

The state-owned provider began rolling out fibre in 2012 with a remit to offer speeds of up to 100Mbps to 95 per cent of homes and 100 per cent of businesses in the emirate by 2015, signing wholesale broadband contracts with both Vodafone and Ooredoo.

“What I wanted to do was to take Vodafone and QNBN, forge a duct access agreement, bulk it all together and speed up my deployment capabilities.

“We analysed it and there is no country in the world where a government-owned fibre company survives on a longer-term basis. They tend to start off with good intentions and then run out of steam. So we wanted to provoke that conversation early and say we want that capability, and we’re happy to acquire it.”

The deal made sense. And so it came as some surprise when the company scrapped it’s bid less than two months later, with research firm BMI noting that the decision not to purchase QNBN left Vodafone Qatar at a “strategic disadvantage relative to Ooredoo”.

Whitehill concurs, suggesting Vodafone Qatar’s lack of fibre infrastructure has left it at a “massive disadvantage” compared to its rival, but he reveals it was not his choice to call off the acquisition.

“We still wanted to do it but unfortunately at the last moment the government decided that they wanted to bring a halt to the process and re-examine whether they should have a more public process for the acquisition.

While the CEO reveals Vodafone is still interested in acquiring QNBN, outside of the deal Whitehill sees few other options for acquisitions in the Qatari market.

So for now, he says, the focus is on partnership opportunities.

These include making the most of the capabilities of stakeholders Vodafone Group and Qatar Foundation (QF), which own 23 per cent and 22 per cent of the company respectively.

One such deal has seen Vodafone Qatar team up with QF investment Gulf Bridge International to provide international connectivity to customers, while through another, it is reselling the data centre and cloud solutions of QF joint venture MEEZA.

As a result, and through more comprehensive offerings through Vodafone Global Enterprise and Carrier Services, Whitehill expects to boost Vodafone Qatar’s enterprise business from beyond the almost 10 per cent of revenue it accounts for today.

“If you’re to look at some of Vodafone’s global offices like the UK, enterprise is 50 per cent of core revenue. So I definitely see the enterprise segment doubling in the next three to five years.”

As reported in November, Vodafone Qatar is expected to make its first profit this year, as it continues to steadily reduce its quarterly losses.

“The profit would be when we include amortisation of the license. So that’s what we mean by making profit. We paid a dividend last year to our shareholders and we’re on track for another dividend this year.”

Apart from enterprise fixed services and post paid customers, Vodafone is also looking at 4G in a big way.

After 4G services, which Vodafone launched in the middle of last year the company is planning to follow Ooredoo into 4G+, doubling connection speeds.

“In terms of 4G+ rollout, we will be formally launching that in the next few weeks, and the test period that we’ve done has massively positive customer feedback.”

This moves our conversation to future opportunities, more specifically the Qatar 2022 World Cup, where Whitehill sees challenges and opportunities in equal measure.

Providing connectivity on the Doha metro, and handling the network congestion from the massive crowds expected to arrive for the tournament will be the easy part, he suggests. The biggest challenge is in making sure the technology isn’t out of date by the time tournament arrives.

“One of the things on our mind now is how we make sure the telecom infrastructure that’s developed and deployed in 2022 is absolutely fit for purpose then and ahead of its time. So that’s something we need to talk to our technology partners about.”

But with the 52-year old not expecting to be around when the tournament hits in seven years time, he refers back to his last remaining commitment as his immediate task for the future.

“That’s my challenge now, to get that legacy of no competition in some segments removed, and then I think we’ll be proud of what we’ve done.”