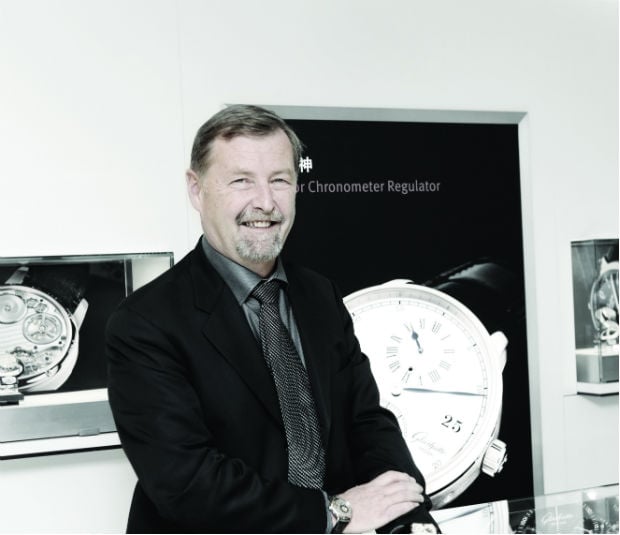 Yann Gamard has a problem. The managing director of Glashutte Original says they are unable to keep pace with the growing demand for their watches.

“Every year we are struggling to satisfy consumer demands, which in a way is good. It continues to provide us with work.

“But in a way it’s bad: the frustration of consumers that they can’t buy right away. There’s some understanding with most consumers that it takes a while to produce a beautiful watch. We have to be cautious that we do not open too many doors we can’t satisfy. The worst part is if you create a store, only put three watches in it – that’s not our technique.”

Their technique is one that’s precise, measured, practiced, and finely tuned over 165 years. And it’s one that’s still developing, one second at a time.

The main offices of Glashütte Original exist in the small town of Glashütte, a green and hilly area in Saxony, Germany.

There’s a manufactory renovated with a light atrium, a museum, a school, and nearby a specialised dial manufactory. Today up to 95 per cent of all the components used to make Glashütte Original watches are produced within the area, says Gamard.

“We don’t grow alligators, so when we do leather straps, we have to buy the leather from somewhere else. But aside from that, we produce just about everything.”

It’s no surprise that Gamard points to the local manufactory as the brand’s “best marketing tool”.

“Most of our customers from across the world fly over, and they meet the guy who has finished their watches, or the lady who has polished their component. They like that [the watches are] made here, they come out of this place.

“In here, you have the 25-year-old, the 40-year-old, and the 60-year-old. This is what helps us. To get a kid to get interested in taking care of a piece of metal, in such a way that it becomes perfection, and it sometimes takes hours, and to do it again, and again, until it reaches that level, is absolutely unthinkable. Because he or she sees parents do it, grandparents do it. And they all understand that it’s what made us successful.”

Yet the brand hasn’t been without challenges. With forced consolidation after WWII into one company (VEB Glashütter Uhrenbetriebe), the watchmaker expanded to some 2,500 employees – around half of the village’s population. Then they shrunk.

“When the wall came down in Berlin, some people came and bought back their name, and we inherited GUB, which was started and revived – initially with 72 people,” says Gamard of the sudden shift. “We called it the 72 club.”

Throughout all this transition, Gamard notes one thing remained consistent for the people of Glashütte: “They have always been producing watches. The collapse, when the wall fell down, was only a momentary disruption for them. It was very easy for us to bring people back in and [start] producing.

“Their specialty here is that they love to produce beautiful movements,” adds Gamard.

Indeed, he jokes, if the people in the region could have found a strong enough glass to incase the movements, “that’s what they would have sold.”

In 1994, the company attracted the eye of private investor and watch enthusiast Heinz Pfeiffer.

“He took it over, rebuilt it, focused himself on Germany first, and then he became successful. But he quickly found out he didn’t have the surface to conquer the world. I’m talking about industrial surface, financial surface, and commercial surface.

“So he decided to ally with the group, and picked the best group to do it.” In 2000, Glashütte Original joined the Swatch Group umbrella.

LOOKING AT THE FUTURE

The global luxury market continues to develop. According to a report by advisor firm Bain & Company, the number of luxury consumers worldwide has more than tripled over the past 20 years.

“Middle Eastern consumers have the highest per capita spending on luxury goods, at approximately €1,400 per year. Their key luxury categories include leather goods, watches, cars and overseas holidays – with Dubai remaining the biggest market share in the region,” notes Cyrille Fabre, partner at Bain & Company.

“The Middle East hosts all the visitors of the world, so [it’s] become an important market for us. Actually, the Dubai Mall boutique is our best boutique worldwide. It’s racing with the boutique in Dresden. We have the great opportunity of a partnership, which isn’t just a partnership, it’s [more of a] brothership, with the Rivoli Group.

“Russia is our next step, where we need to develop. But if you attack Russia, you need to do it properly. And I need more volume than I can do right now.”

But it’s not just global development that Glashütte is considering. The brand also has its eye on women.

“We have always had a very good, very beautiful women’s line: Lady Serenade. We never advertised it, and it still sold every year. Now we have launched the Pavonina, and we have re-declared our love for women.”

Yet even with the expansion and changes, Gamard notes the brand is very conscious of not over-extending. Any error, any decrease in quality, and consumers wouldn’t be happy.

“Eighty per cent of our customers are connoisseurs, watch likers, watch aficionados, that look for a great alternative to a Swiss watch.”

When compared to Swiss watches, the brand tends to be slightly larger, a bit heavier. “We make very strong movements where we are able to put in a lot of complications without any issues. At the end of the day, our watches are a little bigger because of this. Which 20 years ago would have been a handicap. Nowadays [it] is great. Everyone wants a bigger watch,” says Gamard.

“Not that Swiss quality isn’t very good,” Gamard adds. Only there’s something the group always says: “We’re not Swiss… but we’re German.