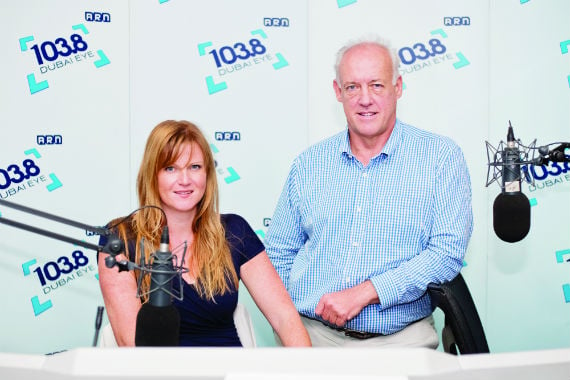 Morning gridlocks on Sheikh Zayed Road have become a reliable ally for Malcolm Taylor and Brandy Scott, the presenting duo behind the Business Breakfast on 103.8 Dubai Eye. They are possibly the only two people in the UAE who don’t mind the perennial traffic.

“It is a horrible thing to say but traffic is actually our friend,” says Brandy, wincing slightly at the absurdity of the sentence.

“We love the traffic jams,” confirms Malcolm. “Sorry to be perverse but you know the longer people are stuck in their cars listening to us the more we can help them.”

Their listeners will forgive them. The Business Breakfast is one of the most popular radio shows in the UAE — a four-hour morning broadcast, covering every snippet of business news from the region and beyond.

In fact such is the devotion of their audience, listeners often make themselves late to work by choice.

“We do get people saying ‘that was such a good interview you made me late for work’. I think that’s a good accolade,” says Malcolm.

“That is true actually, that is probably the best compliment we get — when people text in and say ‘I was ten minutes late to work because I stayed in the car listening to you’. That’s cool.”

The importance of breaking business news first thing in the morning in a world business hub such as Dubai could be reason enough to explain their listeners’ poor timekeeping. But that would be doing a disservice to Malcolm and Brandy’s talent as broadcasters.

Though a generation apart and born of different nations, the pair’s banter and camaraderie are as delightful to witness in the flesh as they are to hear over the airwaves. The real magic in the show lies in their rapport; a chemistry that Malcolm says took time to grow.

It’s not just the pair’s playful banter that makes them a driving force of the morning breakfast segment.

As was the case for financial journalism the world over, the Business Breakfast flourished during the world’s economic downturn when overnight, financial news became relevant to all.

“We became a lot more accessible with the financial crisis. We found our listener numbers grew and we also found that they widened because a lot of people who wouldn’t normally read the business pages suddenly felt that they should be,” explains Brandy.

“The business news stopped being business news and we ended up on page one of the newspapers. A lot of people who may be outside of the financial industry have picked up the show, which has been brilliant for us.”

But if the simultaneous collapse of global economies is the bones behind the Business Breakfast show’s success, then Malcolm, Brandy, their producer Vasti Raftopoulos and the rest of the team are the meat.

The show received industry recognition at the end of last year picking up the award for Excellence in Financial Journalism at the ICAEW, highlighting the show’s ability to report complex business data in a consumer-friendly way.

Six years on from their first show as a duo, Malcolm and Brandy look set to dominate the UAE’s business breakfast slot for a while yet.

With the occasional overdosing of caffeine to offset their 4 am alarm calls — leading to world record attempts involving Weetabix — and a roster of guests that in the past have included the likes of Richard Branson, Donald Trump and Desmond Tutu, sitting in traffic maybe isn’t so bad if you’re tuned into 103.8.

“Come and give us a listen,” says Malcolm. “We are more fun than you think.”