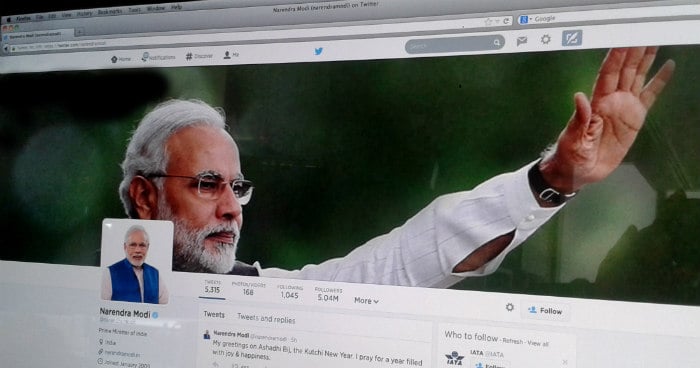 India’s new Prime Minister Narendra Modi has become the fourth-most followed world leader on Twitter, with over 4.9 million followers, according to a new report.

Modi, who was elected as India’s PM in late May 2014, surpassed the United States White House account to reach the fourth spot, revealed Twiplomacy, an annual global study of world leaders on Twitter by PR firm Burson-Marsteller.

However, the most followed world leaders follow few other peers, and they are hardly conversational, said the report.

“This study illustrates that while the number of followers is important, the number of mutual connections is even more important,” said Jeremy Galbraith, CEO of Burson-Marsteller EMEA and global chief strategy officer.

The study found that foreign ministers have wider connections with their peers, allowing for private conversations via direct messages on Twitter.

“It is interesting to see how foreign ministries have created large digital networks on Twitter where not every tweet is approved by lawyers and press officers. Corporations and CEOs can learn a lot from politicians on Twitter, in terms of embracing digital tools for communications and how to connect with peers and influencers,” Galbraith added.

The study also found that Pope Francis is the most influential world leader on Twitter, with his Spanish messages retweeted more than 10,000 times each on average. The tweets of Venezuelan President Nicolas Maduro are retweeted 2,000 times, while Obama’s tweets are only retweeted 1,400 times each, on average.

Burson-Marsteller analysed 643 government accounts in 161 countries for the study, which found that 32 countries, mainly in Africa and Asia-Pacific, do not have any Twitter presence. All the accounts combined had an audience of 157,138,063 followers. The study also revealed that 68 per cent of all heads of state and government have personal Twitter accounts.

“This year we have seen a 28 per cent rise in Twitter accounts among government users, a dramatic increase in efforts to reach people around the world,” said Donald A Baer, worldwide chair and CEO, Burson-Marsteller.

Obama was the first world leader to sign up to Twitter on March 5, 2007 (at the time as Senator Obama). Mexican president Enrique Peña Nieto, Belgian Prime Minister Elio Di Rupo, Canadian Prime Minister Stephen Harper and the US State Department, all joined later in 2007.

“Twitter has become one of the most powerful communication tools and provides a direct line to our leaders. World leaders might not necessarily read the tweets addressed to them, but their teams certainly monitor the Twitter activity.”