In pictures: Is this the world’s ‘most innovative car’? - Gulf Business

Innovation has become the one word driving the future of practically every industry today – with the automobile sector being no exception.

But while there is stiff competition within the industry, there are some standout examples of automotive machine ingenuity.

According to the scientists and engineers at the Centre of Automotive Management (CAM), a scientific institute for empirical automotive and mobility research at the University of Applied Sciences in Bergisch Gladbach (Germany), the Porsche Taycan is “the most important innovation driver in the global automotive market”.

In the AutomotiveINNOVATIONS report published by the institute in conjunction with consultancy PricewaterhouseCoopers (PwC), experts listed 27 technological innovations in the Porsche Taycan, 13 of which are world firsts. Porsche’s pioneering new electric sports car was named the world’s most technologically advanced passenger vehicle, beating 250 production vehicles in the evaluation process. 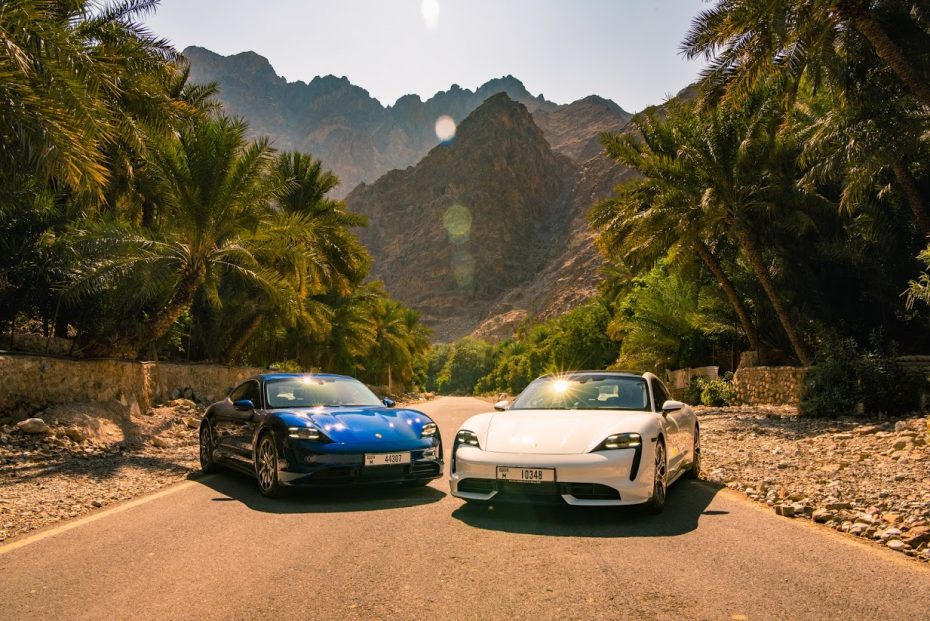 While the Taycan is the brand’s first fully electric model, Porsche has been at the forefront of electromobility for a long time. Ferdinand Porsche, later the founder of the company, designed his first car known as P1 in 1898 featuring an electric motor. Two years later, he presented the world’s first functional hybrid car, the “Semper Vivus”.

In 2010, Porsche paved the way for electromobility with the Cayenne S Hybrid. The world’s first parallel full hybrid in the luxury car class, the Panamera S Hybrid, as well as the first plug-in hybrid supercar, the 918 Spyder, followed shortly after that. Today, plug-in hybrids represent some of the most powerful flagship models in the brand’s range, such as the Cayenne Turbo S E-Hybrid or the new Panamera Turbo S E-Hybrid. With the launch of the new Taycan, Porsche presents its first ever fully electric model, setting another important milestone for the successful future of the company. From the outset, the sports car manufacturer set out to prove that one does not have to compromise on performance when choosing an electric car. The first models to be made available in the series are the Taycan 4S, Taycan Turbo and Taycan Turbo S, which are among the most powerful production models in today’s Porsche range. 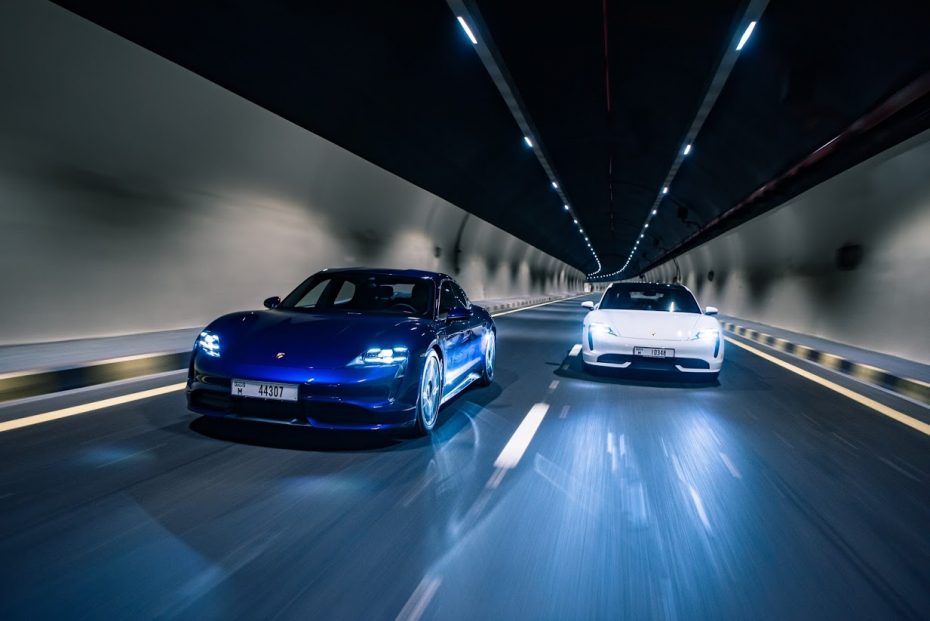 And with an estimated driving range of 412km in the Turbo S and 450km in the Turbo, both vehicles offer a solution for everyday use.

When equipped with the optional Performance Battery Plus with a capacity of 93.4 kWh, the Taycan 4S offers a range of up to 463 km and delivers 571 PS.

Extensive thought has also been given to every single element of the sports EV, right down to its shape. With a drag coefficient of just 0.22, the aerodynamically optimised exterior lines make a significant contribution to low energy consumption, thus improving its range.

Even the futuristic looking headlights play their part. They act as ‘air curtains’, guiding air over the front wheel housings, thus reducing air turbulence and resistance. 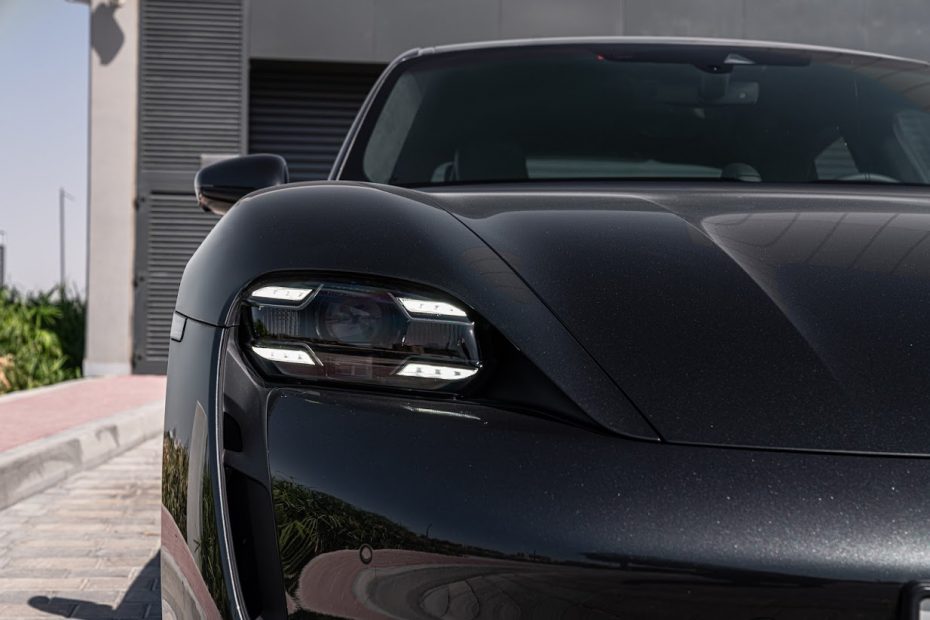 Beneath them, the low side air intakes are not simply a static feature. They form part of the Taycan’s Porsche Active Aerodynamics system. With their fully variable, individually controllable cooling air flaps, they supply the two radiators. In addition, the air flow onto the brakes is controlled via a brake air duct.

The chassis control unit continuously monitors the temperature of the brake discs and requests targeted cooling of the discs if necessary – for example on the racetrack. Under normal cruising conditions, the cooling air flaps are closed to reduce drag and increase range. 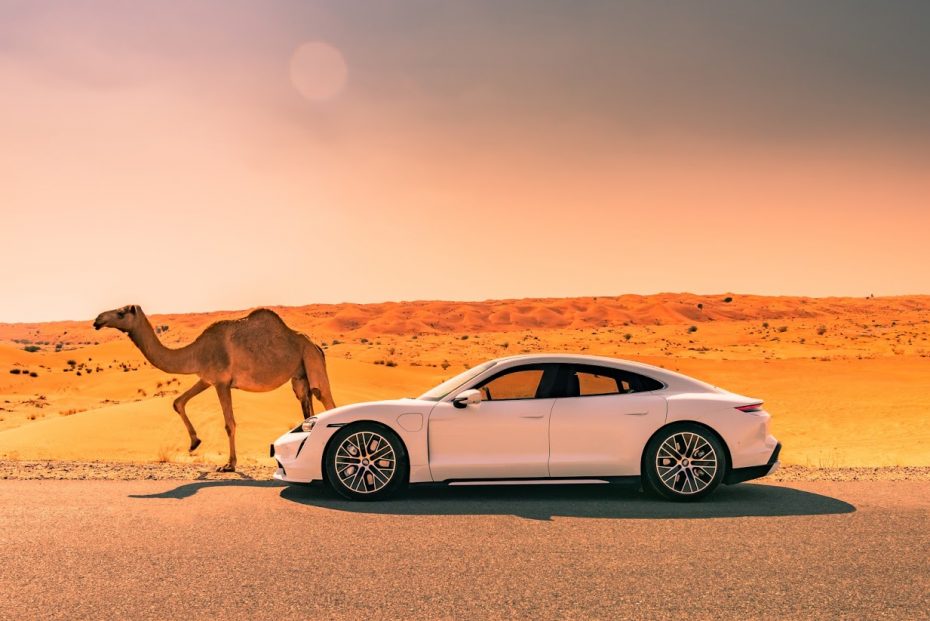 A powerful computer, the chassis control unit, commands an incredibly sophisticated collection of systems which enable the Porsche Taycan’s exceptional levels of performance. This includes existing technologies such as Porsche Active Suspension Management, Active Aerodynamics and Torque Vectoring that we’ve seen on previous models such as the 911, the Cayenne and the Panamera, which are, combined with ground-breaking new systems, created especially for Porsche’s very first EV. 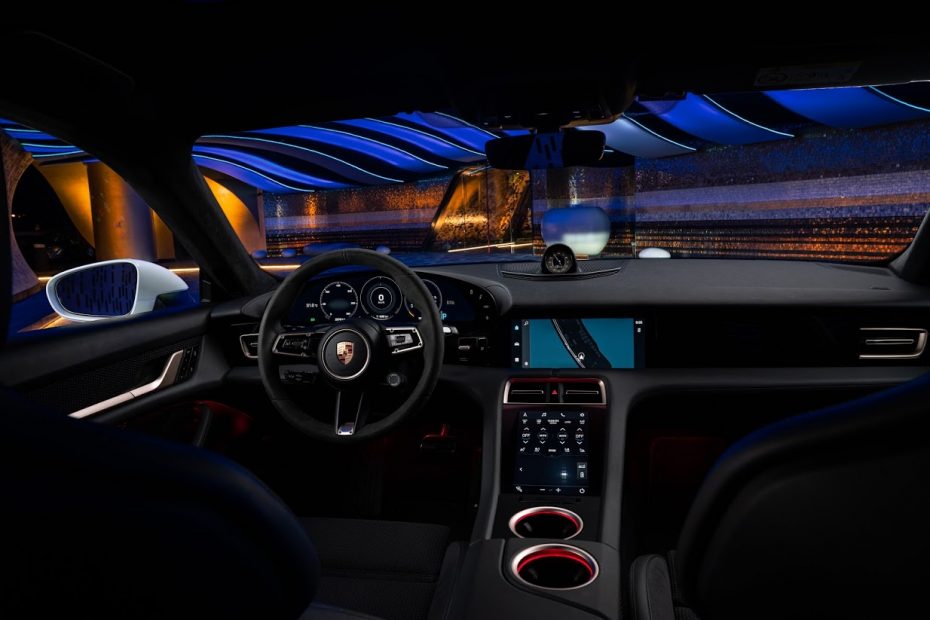 For example, the Taycan is the first production vehicle with a system voltage of 800 volts instead of the usual 400 volts for electric cars. This technology powered the Porsche 919 Hybrid to victory at Le Mans in 2015, 2016 and 2017. It enables the battery in the Taycan to be recharged for a range of up to 100km in just over five minutes. The charging time from 5 to 80 per cent is 22.5 minutes under ideal conditions.

An area where EVs often demonstrate weakness is in power consumption during high-performance driving. Consistent rapid acceleration is usually one of the fastest ways to drain the batteries, but Porsche has addressed this challenge with the first-ever two-speed transmission featured in an EV. 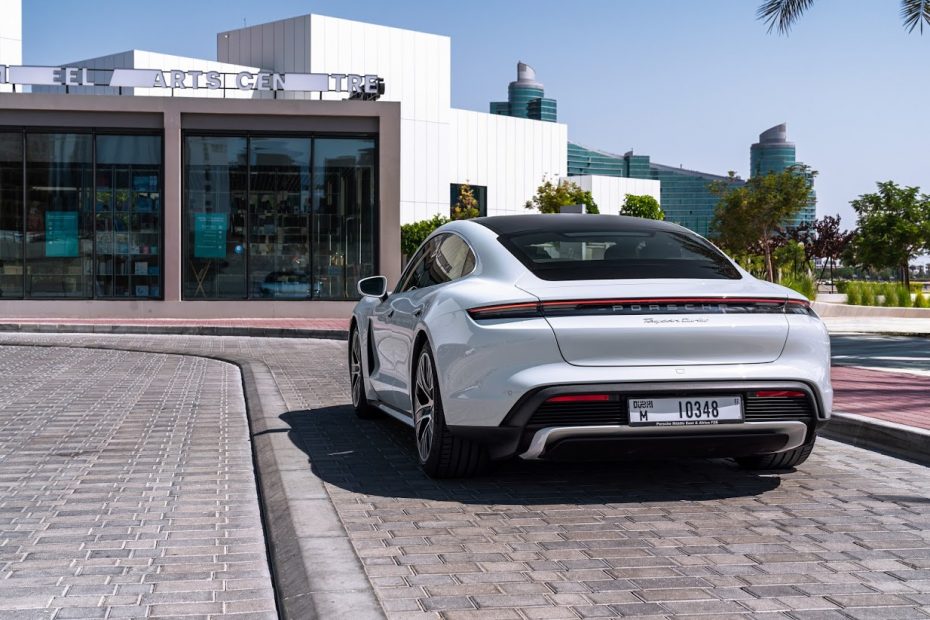 Installed on the rear axle, the first gear gives the Taycan even more acceleration from a standing start, while the second gear with a long gear ratio ensures high efficiency and power reserves. This allows the Porsche Taycan to maintain its charge for longer even under sporty driving conditions. In fact, an all-wheel drive pre-series model managed to accelerate 26 times from 0 to 200 km/h in succession with a difference of just 0.8 seconds between the fast and slowest attempt.

Porsche has leveraged unique advantages of an EV to develop benefits that cannot be matched by an internal combustion vehicle. For example, the immense power of the Taycan Turbo S and Taycan Turbo comes from the two exceptionally efficient permanently excited synchronous motors, one on the front axle and one on the rear axle, making the car an all-wheel drive. A special innovation in these electric motors is the ‘hairpin’ winding of the stator coils, which makes it possible to incorporate more copper in the stator, increasing power output and torque while maintaining the same component volume. This gives the Taycan’s electric motors the highest power density (kW per litre of package space) of all the electric powertrains on the market today.

In internal combustion engine vehicles, excess kinetic energy at the brakes is converted into heat during deceleration. With electric vehicles, it is possible to recover a large portion of this kinetic energy to recharge the battery using the electric motors as generators during braking. Thanks to the Taycan’s high recuperation output of up to 265 kW, approximately 90 per cent of braking operations in everyday use are performed by the electric motors alone, without activating the wheel brakes. As a result, Porsche is recommending that the brake pads only need to be replaced every six years.

In all, it’s fair to say the Porsche Taycan provides a glimpse into the future of electromobility.