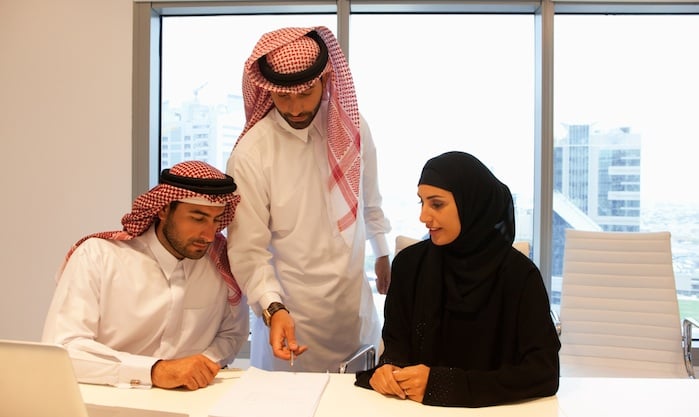 Organisations in the Middle East are facing a major shortage of female leaders, a factor that needs to be addressed urgently, a new report by HR consultancy Mercer has found.

A major problem contributing to this was a “lack of focus around developing this segment”, with only 23 per cent of companies having a defined diversity strategy in place for developing female leaders, said the report.

“Among those companies we surveyed that acknowledged that there were barriers to advancement by female leaders, a large percentage blamed an organisational culture that does not support work-life balance,” said Khaled Alturki, principal, Middle East.

“Other reasons cited were a lack of investment in women, and managers that are either unwilling to promote non-traditional candidates or simply biased.

“Organisations also blame clients and customers who do not accord credibility to women, as well as the exclusion of women from informal networks,” he added.

Some of the countries in the region have recognised the problem and are looking at ways to address it. For instance, the UAE is looking to introduce more regulations to help increase women’s presence in senior positions, the country’s minister of economy told Gulf Business last month.

“We are looking at some regulations where we can bring up the participation of women in the economy and it should not be a problem. It does not necessarily have to be laws…it could be regulations as well,” said Sultan bin Saeed Al Mansouri.

“We are specifically looking to see if something can be done to increase the participation of females on boards in public share holding companies, like women members on corporate boards of federal agencies,” he added.

However, the problem with leadership in regional firms is not just restricted to the lack of women; Mercer also found that companies in the region are struggling to identify future leaders and lack strong and deep leadership pipelines.

“In the best-case scenario, this means an ongoing need to fill senior roles with non-nationals. In the worst case, it means a leadership vacuum in the future which could have serious ramifications for the region’s economic growth.”

As per the study, of all the companies contacted, only half had a defined and agreed leadership development strategy, a smaller percentage compared to their peers in Asia Pacific and Latin America.

Among those surveyed, 62 per cent of the firms reported that top executives spent 10 per cent or less of their time developing current and future leaders.

Even for those companies in the region who do have established leadership programmes, many of them are not using the most effective methods, added the report.

Classroom training is the most common form of professional development used by companies in the Middle East, yet it is considered less effective than other methods. Organisations see overseas assignments, challenging development opportunities and MBA or other university programmes as much more effective, but these methods are used by only 29 per cent, 46 per cent and 11 per cent of companies respectively.

“Although half of the companies we surveyed had defined leadership development strategies, they reported that the sense of urgency necessary to focus new attention and resources on this issue just does not exist,” said Alturki.

“There is a lack of time, resources and focus on nurturing future talent – these are the three main barriers to leadership development in the region.”

“Of the companies we contacted, only 13 per cent cited insufficient funds for development as being a barrier to achieving their development goals, which may indicate that organisations just don’t see the value in spending on leadership development,” said Alturki.

The report stressed that organisations in the Middle East should reassess their leadership development practices and tackle some of the key barriers. Until this changes, they will likely continue to rely heavily on expatriates to fill top leadership roles and face significant succession challenges.