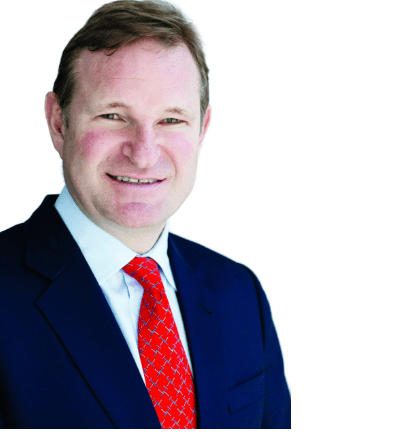 My formative years were spent in Aberdeen, Scotland, where I attended school and university. It was an exciting time in the early stages of the North Sea oil boom. What had previously been a fairly rural and parochial city quickly became much more international in its outlook. The renewed spirit of energy, entrepreneurialism and a ‘make it happen’ approach opened my eyes to the wider world and made a significant impact on me. My first degree at Aberdeen University was a bachelor’s in science specialising in forestry and rural land management. I followed this with a post-graduate diploma in real estate, specialising in urban property.

After leaving university I relocated to Edinburgh where I trained and qualified as a chartered surveyor. One of the significant milestones in my career was my meeting with JLL senior partner in Edinburgh (and a Scottish rugby legend) Andy Irvine. He recruited me to JLW (now JLL) and was my boss and mentor for the next 20 years. In the early days, we were a very small team. The necessity to be an all-rounder capable of tackling a wide variety of assignments provided very valuable experience as I gradually moved towards firm management and leadership roles. In 2008, I decided to take on a new challenge and moved to Turkey as managing director of the JLL business there. Following three happy years in Istanbul, I was asked in 2011 to relocate to Dubai as chief executive of JLL in the Middle East and North Africa region.

I think my general approach to business and leadership stems from two strong influences: my family; and my experience at JLL. My family and parents were old-fash- ioned Scottish Presbyterians who placed great value on education, service to others and a strong work ethic. At JLL there is an ethos of adhering to certain non-negotiable values including a commit- ment to excellence, teamwork and strong ethics. Allied to energy and enthusiasm, these core values have strongly influenced my approach to busi- ness. This is to give clients such a high quality service that they keep coming back with repeat business, they recommend us to their friends and they pay our fees willingly.

After 28 years with JLL in a number of really satisfying roles and three wonderful cities, I have had a lot more highs than lows. I have been enormously lucky. As a real estate advisor I have had the privilege of advising on some really important projects that have given me a great variety of work and a huge amount of professional satisfaction. Since moving to more of a leadership role, I have discovered a whole new range of activities and hopefully developed a few new skills. As a boss, I have enjoyed helping my colleagues achieve their potential as real estate professionals. So I have had lots of highs. Among the few lows, what stands out is the experience of dealing with the fallout of the global financial crisis in 2008 and having to make some close colleagues and friends redundant. Building a business is a lot more fun than dismantling it.

In terms of ‘dos’ there are lots of different ways to succeed. I have always thought the key steps include putting the client first every time, gaining a reputation for being totally reliable, being a team player and showing energy, enthusiasm and determination at all times. I advise people starting in the real estate services business to work and study hard in order to become a true expert in their field. When I started out as a young office agent my boss advised me to learn the details of every single build- ing in the market. When I mastered that, I found that my career took off quite quickly. Among the key ‘don’ts’ in our business are the people who talk a great game but clearly lack true professional expertise. That soon becomes obvious to the people who matter. So for me, speaking nonsense or in a dishonest, misleading way is a key ‘don’t’