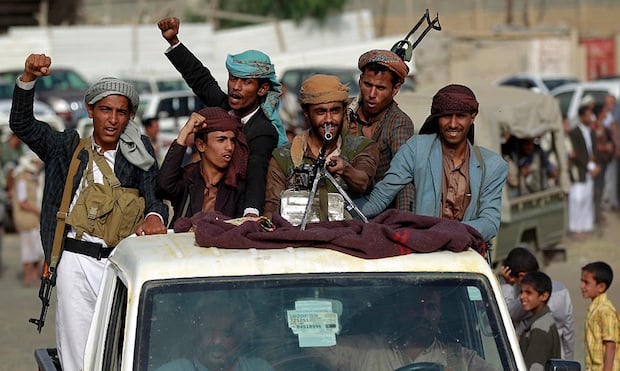 Authorities in a port controlled by Yemen’s Houthi movement have seized two oil tankers from international traders in a payment dispute, according to the ships’ owners, an incident which could make it more difficult for the country to import vital supplies.

Ocean Tankers, the Singapore-based owner of the two 74,000 tonne ships, the Chao Hu and the Hong Ze Hu, confirmed that the vessels were being denied permission to leave the Red Sea port of Hodeida, Yemen’s second-biggest port, which is controlled by the Houthi movement that also holds the capital Sanaa.

Importing goods into Yemen became a major challenge since civil war broke out in the country and a Saudi-led coalition imposed a maritime blockade in its fight against the Houthi group that drove President Abd-Rabbu Mansour Hadi from Sanaa in 2014.

Hadi’s government now controls the southern port of Aden, but Sanaa and the north are in the hands of the Houthis and military forces loyal to their ally, former President Ali Abdullah Saleh.

Yemen is the poorest country on the Arabian peninsula and depends heavily on imports to feed its nearly 25 million people.

While Yemen has been able to import certain goods including fuel, trade has been increasingly hampered by dwindling cash reserves and limited access to foreign bank credit lines.

“The vessels themselves are not under arrest but have unfortunately been caught up in a commercial dispute between cargo interests. The dispute is nothing to do with Ocean Tankers or our ships and we hope the dispute can be settled quickly,” an Ocean Tankers spokesman said.

Several trading sources close to the matter said the Yemeni authorities had barred the ships from leaving after failing to pay tens of millions of dollars for their cargoes of gasoline and gasoil.

The cargoes are owned by Swiss-based trading houses Gunvor and Litasco, the trading arm of Russian oil company Lukoil, and were imported via CruGas, a London-based trader and regular supplier for Yemen’s main oil company.

A document seen by Reuters shows the Yemeni ministry of justice issued a Sept. 4 injunction instructing the shipping agent not to give the two ships departure permits.

In response to the seizing of the Hong Ze Hu, charterer Gunvor filed a lawsuit on Sept. 6 at the UK High Court against CruGas, claiming nearly $39 million for losses suffered, according to a court filing seen by Reuters.

Gunvor said CruGas owed it for demurrage — a charge for failing to discharge the ship on time — and pre-payment for the cargo of 30,000 to 35,000 tonnes.

Sources at the port of Hodeidah said CruGas and the Yemen Oil and Gas Company (YOGC) were in a payment dispute over the delivery of fuel.

According to Reuters ship tracking data, the two vessels have been anchored off the coast of Yemen for several months.

Sending oil products to a war zone is riddled with risks, from political factors preventing delivery to insolvency of the buyer and the risk of non-payment, Ben Heaney, head of political risk at French shipping insurance broker Aon France, told Reuters.

This incident could have far reaching implications on Yemen’s ability to import fuel or other goods in the future due to insurance risks that will make voyages costlier or in some cases impossible, Louis Bollaert, Aon’s head of trade credit, political risk and surety said.

“Any detention or frustration action in Yemen that affects the oil sector and is not resolved promptly will almost certainly lead to a total withdrawal of insurance and finance appetite to fund and cover these types of risks,” Heaney said.

According to Bollaert, the supply contract is governed by English law, while the injunction was made under Yemeni law, creating a legal mismatch.

“It would be impossible for the tanker to manoeuvre in order to leave the port. Additionally, the safety of the crew is paramount, and attempting to defy local ‘law’ would certainly add unwelcome danger to the crew’s safety, in an already unacceptable situation,” Heaney said.

The problem is exacerbated by the lack of bunker fuel in the port of Hodeida as supplies on the vessels are expected to run out within a few weeks, the sources said. Crews on the Hong Ze Hu were replaced in recent days.