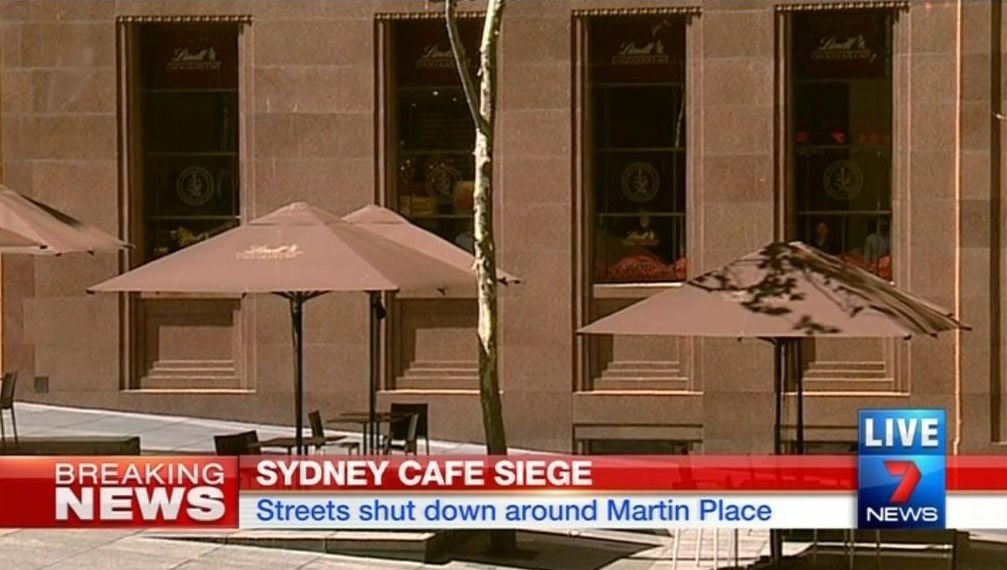 Five hostages fled from a Sydney cafe where a man is holding people at gunpoint, as police negotiators attempt to end the nine-hour standoff peacefully.

Officers are prepared to work through the night to free the remaining hostages from the Lindt cafe in Martin Place, the heart of the central business district and home to the Reserve Bank of Australia, New South Wales state Deputy Police Commissioner Catherine Burn told reporters. She declined to say how many people remain inside the cafe.

Burn wouldn’t comment on reports by Channel 10 the man had demanded to speak with Prime Minister Tony Abbott and wanted an Islamic State flag delivered to the cafe. When asked about reports bombs had been planted around the city, she said police had the situation contained to one area.

“Our approach is to resolve this peacefully,” Burn said. “It might take a bit of time.”

The mid-morning hostage-taking brought much of Sydney’s CBD to a standstill and saw the local currency fall, as the nation’s biggest banks closed branches and the government delayed its mid-year economic outlook announcement. Abbott, whose government raised Australia’s terrorism alert to the highest level in a decade in September, convened Cabinet’s National Security Committee and urged people to remain calm.

Six hours after the incident began, television images showed the first three hostages, one wearing a Lindt apron, running from the cafe at about 3:40 p.m. Two more emerged about an hour later. They all took shelter behind a line of police officers clad in riot gear and wielding automatic weapons.

Burn wouldn’t say whether they escaped or were released.

There were probably around 10 staff in the cafe when the gunman entered this morning, said Lindt Australia Chief Executive Officer Steve Loane, whose office is about 1 kilometer away.

“I was in our office, one of my staff walked in and said, ‘‘There’s a holdup at the cafe,’” Loane said by phone. Around 30 customers are typically in the premises at that time of the morning, he said.

Sai Chenepalle, 36, said he emerged from the Martin Place train station at about the time the gunman struck. He saw two customers inside the cafe approach the door with their hands raised. He didn’t go in.

“It’s very scary,” he said, standing a couple of blocks away on Macquarie Street. The earliest TV footage showed hostages with their palms pressed against the window holding up a black flag with white Arabic lettering.

Clive Williams, a former military intelligence officer, said the flag appeared to be “Shahada,” which is used by some Islamic State followers though isn’t the group’s official insignia.

The “low-tech, high-impact operation is consistent with what Islamic State has been urging its supporters to do,” Williams, a visiting professor at the Australian National University’s College of Law, said in a phone interview.

Opposite the cafe is the main studio of Channel Seven, the nation’s most-watched commercial broadcaster. One of its reporters tweeted he could see as many as 15 remaining hostages, who were being forced on rotation to hold up the flag for two- hour intervals. In a Twitter posting, reporter Chris Reason described the gunman as unshaven and wearing a white shirt and black cap.

The four biggest banks, including Commonwealth Bank of Australia, closed branches in the city. The U.S. consulate on Martin Place was evacuated, while KPMG International locked down its office. Tiffany & Co., Rolex and Jimmy Choo were among nearby stores that closed.

Abbott said it was shocking that people were being held hostage by a gunman claiming political motivation.

The Australian dollar dropped to a four-year low of 82.05 U.S. cents after the news broke and traded at 82.40 cents as of 7:12 p.m. in Sydney. Ten-year government bonds rallied, sending the yield down as much as eight basis points to 2.82 percent, a level unseen since July 2012.

The unfolding siege “may help keep the Aussie under pressure,” said Janu Chan, a Sydney-based economist at St. George Bank Ltd. “News around the budget and declining commodity prices are also weighing on the Aussie.”

Qantas Airways Ltd. flights were being diverted around the central business district, but still operating on schedule, the airline said on Twitter today. Shares in the country’s largest carrier fell 5.4 percent at A$2.27 at the close in Sydney.

Authorities cited the threat posed by Islamic State when they raised the terrorism alert earlier this year. Days later police carried out their largest anti-terrorism raid, foiling an alleged plot to randomly abduct and behead a member of the public.

An 18-year-old man was shot and killed on Sept. 23 after wounding two counter-terrorism officers in Melbourne with a knife. He stabbed the officers in an unprovoked attack outside a police station, where he was due to be interviewed by police after waving an Islamic State flag inside a shopping center.

Maxine and Stuart Rosenthal, 66-year-old tourists from outside Boston, said today they almost reconsidered their vacation to Australia after reading about potential terrorist threats in Sydney. They said they know people hurt and still recovering from the Boston bombing.