Only a few months ago, storied British carmaker Aston Martin was in dire straits. The company had gone public in 2018, but by early 2020, it was in deep trouble with sluggish sales, massive expenditures, and faltering product strategies. Surely, the pandemic would be the last nail in its coffin. That was until Canadian billionaire Lawrence Stroll rallied a band of investors and wrestled control of Aston Martin.

It’s been a stellar comeback since, with Aston Martin reporting that its revenue in Q1 2021 rose 153 per cent to GBP244.4m on the back of the runaway success of its DBX SUV which accounted for 55 per cent of the total number of vehicles sold in the first three months of this year. Stroll is raring for much more – by 2025, he wants the brand to make revenues of GBP2bn.

A major decision he took, apart from announcing a strategic partnership with Mercedes, was to return Aston Martin to the pinnacle of motorsport – Formula 1 – this year. The significance of the move is not lost on Marek Reichman, executive vice president and chief creative officer at Aston Martin Lagonda. “Aston Martin has just come back to Formula One after 61 years, and I think that gives you an idea of the future of the brand,” said Reichman, during a recent press meet to discuss the brand’s latest partnership with Swiss watchmaker Girard-Perregaux.

In February, Aston Martin announced that it would enter into a long-term (neither would confirm how long) partnership with Girard-Perregaux. Swiss watch brands partnering with major carmakers and motorsport events is not uncommon – Richard Mille recently joined forces with Ferrari, IWC has a long-standing relationship with Mercedes, and Rolex signed up as title sponsor of Formula 1 in 2013.

Reichman insists that the Girard-Perregaux x Aston Martin deal is not based merely on superficial optics, but ties into the carmaker’s raison d’ètre which is anchored in exclusivity and craftsmanship. Over a joint call with Girard-Perregaux CEO Patrick Pruniaux, Reichman said, “In 108 years, we’ve made 100,000 cars. Ninety-five per cent of all the cars we’ve made still exist. An Aston Martin isn’t something that you buy to relinquish ownership. It’s about the desirability of our products. Whether it’s timepieces or our cars, these are collectable pieces that people will, in some instances, keep for their lifetimes and hand down.”

Pruniaux, who in addition to Girard-Perregaux also heads up Ulysse Nardin, said that the decision for the Kering-owned watchmaker to partner with the Gaydon-headquartered auto major wasn’t a force fit. “Girard-Perregaux is one of the oldest watchmakers in Switzerland. I don’t know if 95 per cent of the watches we’ve produced are being used, but there’s a good chance they could still be used,” noted Pruniaux.

It’s one of those historical timepieces that Pruniaux is referring to, specifically Tourbillon with Three Gold Bridges from 1867, that has in fact been the inspiration for an all-new timepiece that was introduced to mark the new partnership.

The Tourbillon with Three Flying Bridges – Aston Martin Edition is a 44mm timepiece with a DLC-treated case made from Grade 5 Titanium (interestingly, titanium ore was discovered in Great Britain in 1791, the same year that Girard-Perregaux was formed) and with gold indexes. As Pruniaux explained, there is no mainplate, but it is the three bridges on the movement construction that have replaced the main plate. “The Three Bridges is an icon for Girard-Perregaux, just like the DBS is for Aston Martin. We jointly worked with Mark and his team on designing this tourbillon with three flying bridges. Rarely do we work with others to reinterpret the Three Bridges. However, on this occasion, we made an exception, mindful of Aston Martin’s design prowess,” added Pruniaux.

In a mechanical feat of engineering, that in many ways requires the same levels of precision and allows for the same margin of error that you’d find on an F1 car, the tourbillon cage on the watch measures just 10mm and is composed of 79 components, collectively weighing only 0.25grams, with a blue hand to denote the running seconds of this automatic winding timepiece.

Aston Martin’s name is engraved on the vertical flank of the white gold micro-rotor which can be found beneath the barrel at 12 o’clock. The rotor has been patented because, unlike those found in other timepieces, it is constructed around the barrel so that it does not obstruct the view of the mechanics of the skeletonised timepiece. 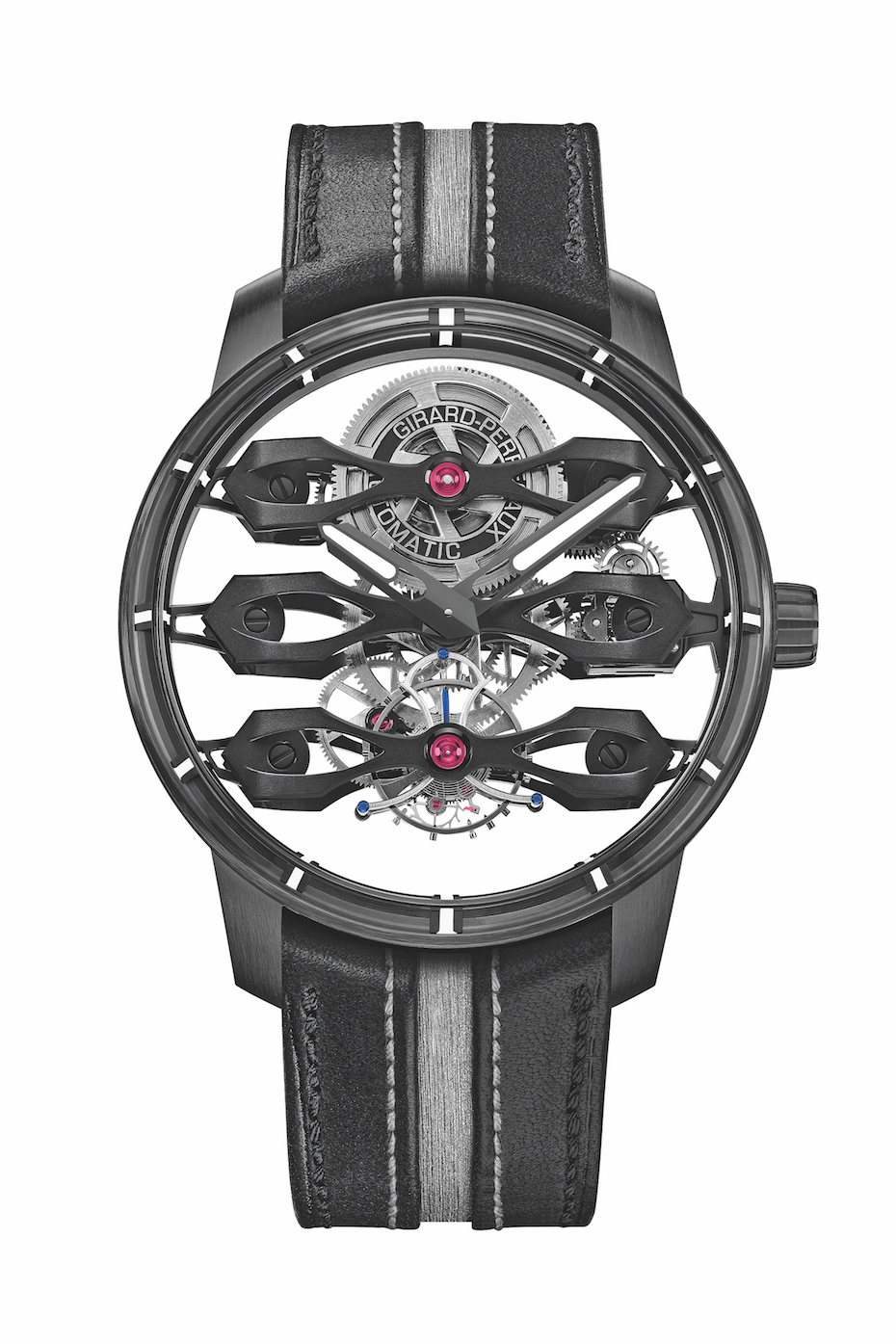 But in a move that demonstrated a next-level technological collaboration between the Swiss and British, you’d have to look beyond the mechanics and to the material front instead. Teams from both companies worked together to develop the first of its kind Girard-Perregaux Rubber alloy which consists of a leather strap with a rubber insert injected with white gold. “We have developed an alloy, a mixture of rubber and a precious metal, to create something which has precious content. We’ve worked with local artisans to create the material locally. [It] is a crossover of both brands – it has the materiality, softness and suppleness of an Aston Martin, and the precious metal [element] that you would typically expect from a timepiece. It’s highlighted by a typical stitch that you will find on the inside of a DBS.”

The GP09400-1683 movement returns a 60-hour power reserve and operates at a standard frequency of 21,600vph. An anti-reflective crystal allows you to peer closer at the movement, with the luminescent and skeletonised Dauphine hands allowing as much of an unobstructed view of the movement as possible.

The timepiece is limited to just 18 pieces and priced at CHF130,000. “Some may not be able to afford an Aston Martin, but will dream of it – and the same [goes] with a Girard-Perregaux,” observed Pruniaux. For a typical Aston Martin customer though, who would pay north of CHF200,000 for a DBX on any Sunday morning, the price of this Girard-Perregaux is hardly a deterrent. But, as is the case with most luxury items – not least an Aston Martin or a fine Swiss mechanical watch – with only 18 pieces to go around, when they’re gone, they stay gone.