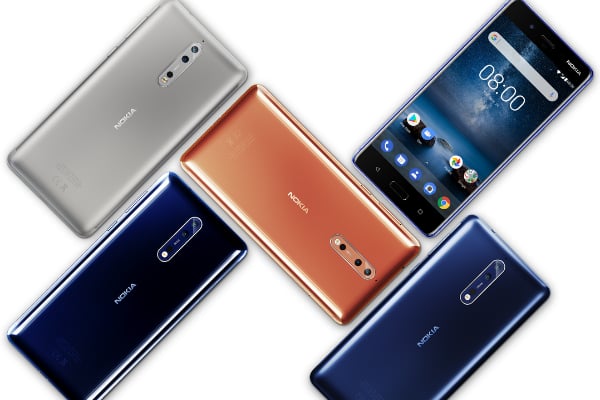 HMD Global, the Finnish firm that is licensing the Nokia brand, has unveiled its latest smartphone in Dubai.

The Nokia 8 is arguably the firm’s first flagship device and is designed to compete with the likes of Samsung, Sony, LG and HTC in the Android premium segment.

It features a QHD 5.3-inch display, Qualcomm’s latest 835 chipset, 4GB of RAM and 64GB of storage alongside an untouched version of Google’s Android operating system.

HMD has also partnered with Carl Zeiss for the device’s camera, rekindling a partnership Nokia had with the firm a decade ago.

Zeiss technology is used in the dual rear 13MP cameras and the front 13MP camera, which can be used at the same time to take ‘bothie’ shots.

The manufacturer is marketing this mode and an OZO Audio system, claimed to allow the device to capture sound in all directions, as its key selling points as it prepares to begin sales in the UAE and Saudi Arabia on September 21.

“We are seeing a new generation of creators who are forging their own paths in the world, on their own terms, and according to their unique outlooks. Our aim is to enable the sharing of their enriching experiences and, ultimately, to unite people and bring them closer.”

HMD officially launched its first round of devices in the Gulf in June including a new feature phone version of the classic Nokia 3310.

Nokia’s re-emergence in the GCC region comes during a period of declining mobile shipments linked to reduced consumer spending and reforms in key markets including Saudi Arabia.

The firm’s latest device appears priced to match current conditions and gain market share from rivals with an average cost of Dhs1,699 ($463) compared to the more than $600 price tag seen on most flagship smartphones.