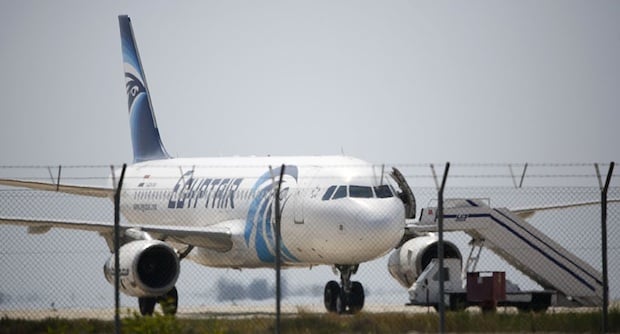 Update 7: The Cyprus government has confirmed that the hijacker has been arrested. No casualties have been reported.

He is described by the country’s foreign minister Alexandros Zenon as psychologically unstable.

Egypt’s prime minister Sherif Ismail previously said the hijacker seemed to have confused motives, asking to meet with a European Union representative and to move to another airport at different points.

Much discussion is now focussing on the security at Egypt’s airports. The hijacking follows the bombing of a Russian Metrojet airliner over Sinai in October by an ISIL-related group. Then, Egypt’s lax airport security was partly blamed for allowing the attack to happen.

Update 6: Four more people are reported to have left the hijacked plane.

Update 5: Cyprus has named the hijacker as Seif Eldin Mustafa, although given previous uncertainty this could still be proven wrong.

Some reports suggest he is an officer in the Egyptian army.

EgyptAir has said it is sending a plane from Cairo to collect its stranded passengers in Cyprus.

Update 4: Egypt’s minister of civil aviation has said that there are seven people left on the plane in addition to the hijacker. They are the captain, his co-pilot, a female crew member, a security officer and three passengers.

The official said the hijacker asked to go to Turkey or Cyprus but said his motives remained unknown or could not be disclosed at this time.

Update 3: The hijacker has been named by news outlets as Ibrahim Abdel Tawwab Samaha, a professor of veterinary medicine at Alexandria university.

BBC News reports that his has been denied by Samaha who said he was one of the passengers onboard.

The man’s ex-wife has now arrived at the airport, according to reports.

Passengers still onboard are said to include two Britons, one Italian and one Irishman.

Update 2: The BBC quotes the head of Alexandria’s Borg El Arab Airport, where the flight took off, as saying the plane was carrying 30 Egyptians, eight Americans, four Britons, four Dutch nationals, two Belgians and one Italian.

Egypt’s foreign ministry has said the explosives carried by the hijacker could be fake given his personal motives.

Update 1: EgyptAir says that only crew members and four foreigners remain on the plane.

The hijacker is reportedly seeking asylum after throwing a letter written in Arabic off the plane addressed to his Cypriot ex-wife.

Cypriot president Nikos Anastasiades told reporters that the incident was not terrorism-related and had been instigated by the man bent on reuniting with his former spouse.

“It’s all to do with a woman,” he said. “We are doing everything to release the hostages.”

She is reportedly being taken to the airport to be part of negotiations.

An EgyptAir passenger plane has landed in Cyprus after being been hijacked by person believed to be carrying explosives, according to reports.

EgyptAir has confirmed that Flight MS181, which is carrying 81 people, landed at Larnaca Airport in Cyprus after being hijacked.

The plane reportedly lost contact with air traffic control around 30 minutes into the flight.

The aircraft is said to have a ‘bomb on board’ and a hijacker ‘is strapped with explosives’, according to Cyprus media. It is unclear whether there is more than one hijacker.

Police have been asked to back away from the aircraft and women and children are being allowed to disembark, according to the latest reports.

Negotiations with the hijackers have begun at Larnaca airport, EgyptAir said in a tweet in Arabic.