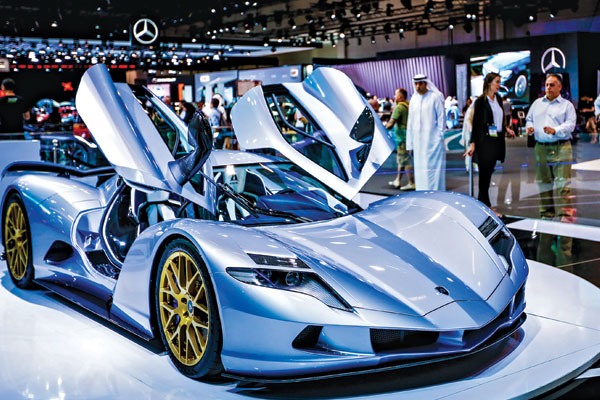 The 15th edition of the biennial Dubai International Motor Show returned to the Dubai World Trade Centre arena last month. There were over 150 major exhibitors from 70 countries and more than 550 vehicles on display. Clearly though, there were a few offerings that stood out from the rest.

Take for example Japanese electric-hypercar maker, Aspark, that chose the Dubai International Motor Show as the staging ground to launch its Owl electric hypercar. Aspark used a robot to unveil the car which is limited to only 50 units and costs over $3m. The Japanese carmaker claims that the 1,984hp Owl can warp from 0-60kph in under 1.7 seconds and has a top speed of 400kph (it could go even faster, but has reportedly been limited). Its four electric motors are coupled with a 64-kWh lithium-ion battery pack which charges completely in 80 minutes and is capable of delivering a range of 450km, eliminating any fears of range anxiety among potential customers.

One of the other big unveilings at the show was the Middle East debut of the new tough-as-nails Land Rover Defender that can climb surfaces at a 45-degree incline and can stay submerged in a metre of water for over an hour. Built on an all-new D7X platform, Land Rover claims that the combination of aluminium with high-strength steel makes this platform three times stronger than anything that its peers in the extreme offroader class of SUVs have to offer.

Over at the BMW pavilion, the highlight was a special one-off edition brought over from Munich called the BMW Individual M850i Night Sky. It featured meteorite materials in its controllers, a paint job on its hood that resembled the night sky, an illuminated constellation on the centre console and also 3D-printed components.

Meanwhile, the low-slung 2020 Corvette Stingray, the first mid-engine Corvette, made its regional debut and is a machine capable of doing the 0-60mph sprint in under three seconds when fitted with the Z51 performance package.

Lebanese carmaker Zedro Motors showcased its 1,250hp Notorious hypercar, only 100 units of this car will be built, and by the start of the motor show, five were already sold.

Beyond the car manufacturing industry and firmly within the realm of futuristic modes of transports, Virgin Hyperloop One showcased an actual-size passenger pod. The tube system, when realized, will travel at speeds of up to 1,123kph and will theoretically be able to transport passengers from UAE to Saudi Arabia’s Riyadh in just 48 minutes.

There were several panel discussions during the motor show, including one that sought to gauge the inclusion of women in the motoring industry. That discussion held over the weekend at the motor show and moderated by Gulf Business had panellists that included Hanan Sobati, the founder of the Middle East’s female-only supercar club, Arabian Gazelles; founder of the Women’s World Car of The Year Award, Sandy Myhre; and Deborah Sherwood, a senior assessor at the Saudi Aramco driving school for women.

Myhre said that while global statistics pointed to the fact that women were responsible for more than 83 per cent of the final decision-making process when buying a car, carmakers primarily targeted men – though that is now changing. “If anything has changed, Dubai is the forefront of that change. Having us here and having Women’s World Car of the Year announce their results for the 2019 awards here is groundbreaking because it’s never happened at this motor show. It’s empowering women and showing the motoring industry that we too are customers,” said Myhre of the awards that comprise an all-women jury of 41 motoring journalists from 34 countries .

Sobati added that it is carmakers today who are increasingly engaging with women in the research and development stage in order to obtain feedback on their products. “We’ve been invited to panel discussions and round tables with the likes of BMW and Aston Martin asking us what we’d like to see in their cars. We get invited to look at concept cars. Before, no one would approach women to listen to their opinion on cars, but that’s changed,” says Sobati. She adds that in only three years since its inception, Arabian Gazelles already has 80 members from 28 nationalities ranging in ages from 20 to 60. While most live in Dubai, there are members from Bahrain, Oman and Saudi Arabia as well.

The latter is a market that has only recently opened to women driving in the kingdom. Deb Sherwood, as a senior assessor at the Saudi Aramco driving school has had a ringside view of seeing women take to the roads in Saudi Arabia. “The emotions the day that the driving ban was lifted were unbelievable. There was overwhelming joy. Families were driving together. Women with their children in the backseat. At the Saudi Aramco driving school, we train the examiners, assessors and lecturers. The driving school wants to support women and give them all the skills they require to drive anywhere in the world,” says Sherwood. A PwC report predicted that the female population of Saudi Arabia is expected to reach 15m in 2020, and 20 per cent of these are projected to be potential drivers based on their age and qualifications. It is statistics like those that have made carmakers realize the latent potential of focusing on women car buyers both within Saudi Arabia and the wider Middle East region too.

“So many women find it intimidating to walk into a showroom,” says Myhre. “In 3-5 years, we’re going to see women customers looked after, not just at a brand level with advertising and marketing focused on them, but also on the showroom floor.”

And judging by what was on display at the Dubai Motor Show, there’s going to be plenty of exciting options to choose from on those showroom floors over the next few months.