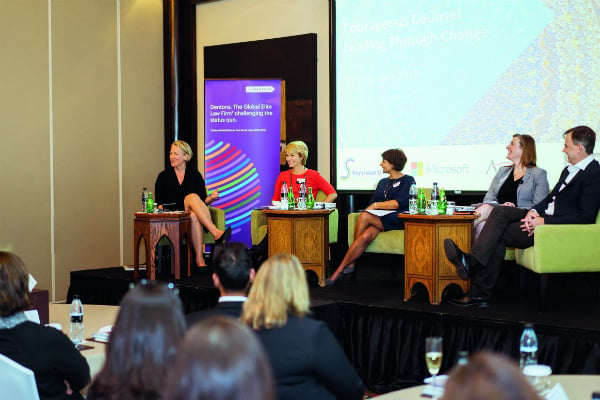 Gender equality is a topic that continues to increase in prominence across the Gulf Cooperation Council.

With International Women’s Day being marked around the world on Wednesday, March 8, companies, organisations and activists will have their strongest platform of the year to celebrate the social, economic, cultural and political achievements of women across the globe.

But for those working towards improved gender equality, the push does simply last for a solitary day – it is a year-round drive comprised of numerous initiatives, programmes and campaigns.

Among this number is Dentons – the world’s largest law firm by the number of lawyers and the sixth largest by revenues.

With a strong presence in the Middle East, including the United Arab Emirates, Saudi Arabia, Oman, Qatar, Jordan, Lebanon and Egypt, the firm has placed a strong emphasis on improving balance in the workplace for the region’s women.

Reflecting on the International Women’s Day 2017 theme ‘be bold for change’, Oman-based co-head of the banking and finance practice for the Middle East region, Sadaf Buchanan, says: “One of the draws of Dentons has been the ability to be part of a firm that places importance on being ‘in and of the community’.

“While Dentons has grown to become the largest law firm in the world, we do not forget that the firm’s history has been deeply intertwined with the Middle East for more than 50 years. What ‘being bold’ means in this context is that we not only want to see greater gender parity, but for our lawyers to also represent and reflect the communities and clients that we serve.

“That includes our female Omani lawyers having rights of audience in the Appeal Court and hiring our first female lawyer in the Kingdom of Saudi Arabia upon the relaxation of the rules for admission and appearance before the courts. But this is just the beginning.”

While there is a wealth of data and figures available in the UK relating to the hiring, retention and promotion of women in UK law firms, the statistics are more obscure for the Middle East.

“The firm is focused on making this an on-going priority by setting the tone from the top and the board committing to setting a target for women to make up 30 per cent of the overall partnership by 2020,” says Denton’s managing partner for the Middle East, Paul Jarvis.

There is still some way to go to achieve these numbers – particularly in the Middle East – but there has been a demonstrable improvement in recent years, spearheaded by proactive initiatives.

Having been one of only a handful of female partners in the Middle East region, Catherine Beckett – a partner in the corporate team who divides her time between Dubai and London, specialising in M&A – recalls that there was a need for a proverbial call to action. The result was Sayyidaat Dentons, the Middle East chapter of the firm’s professional women’s network.

Sayyidaat translates as ‘women’ in Arabic, and since its launch in 2014, the network’s aims have been to provide a networking forum for professional women across industry sectors, creating a community of women and men to support and build the success of women both within the firm and across its regional client base.

Much of the focus of both of the Sayyidaat Dentons network and other wider initiatives has been centred on the importance of mentoring and creating the right platform to network.

The firm is also a sponsor of Reach, a non-profit mentoring programme of men and women dedicated to helping young professional women unlock their potential through structured mentoring and professional support. Dentons has also been active in supporting the launch and promotion of the GCC chapter of the 30% Club – a global campaign which first began in the City of London and which is a business-led initiative committed to achieving better gender balance in senior and leadership positions of various organisations.

Furthermore, the firm participates in the Courageous Counsel initiative, which, together with Microsoft and the Association of Corporate Counsel Middle East (ACCME), hosted a respected panel of UAE-based general counsel to discuss the topic of ‘leading through change’. The discussion was inspired by a book co-authored by San Francisco partner at Dentons Kara Baysinger, entitled Courageous Counsel: Conversations with Women General Counsel in the Fortune 500.

Despite being focussed on the firm’s female employees, initiatives such as Sayyidaat Dentons are by no means exclusive to women.

Kelly Tymburski, who leads Denton’s regional telecoms, media and technology practice, says: “One of the principal aims of Sayyidaat Dentons has been to include men on the journey and to avoid any suggestion that this was a women’s only initiative involving women only issues. This is something we are continuously working to improve. As a business, this is imperative as we are all impacted when we harness only half of the available talent and have only half of the perspective.”

With a culture that aims to embrace the diversity of the people who make up its communities, Dentons also looks to its employees to be active advocates of diversity and inclusion. In recognition of these efforts, the firm won a Gold Award in the 2015 Diversity and Inclusion (D&I) ranking, as well as the 2016 Women in Law Empowerment Forum (WILEF) Gold Standard Award. It was also recognised as a ‘top performer’ of the Leadership Council on Legal Diversity, and co-sponsored the England and Wales’ Law Society Diversity and Inclusion Charter.

The sentiments underlying these initiatives and others are echoed among many businesses throughout the GCC, and Dentons’ messages have resonated well with the firm’s client base.

As we approach 2017’s International Women’s Day, there remains a need to increase the number of female role models, address the adverse impact of unconscious bias in the workplace, support women returning to their careers following maternity leave, and to create a level playing field in promoting talent by advocating strong mentors and seeking out sponsors.

Firms such as Dentons not only have these issues firmly in their thinking, but also include them among their core values. By continuing to advocate women’s issues throughout the year, Dentons will surely contribute to the growing role and recognition of women in the workplace across the GCC.