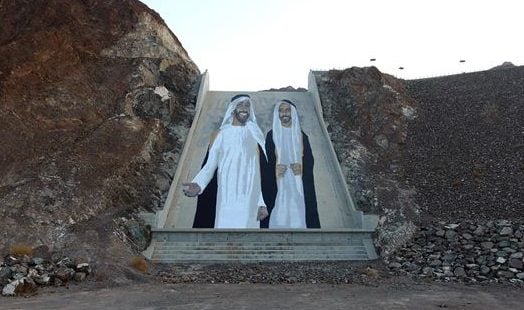 A huge mural  has been installed in the UAE to commemorate the nation’s founding fathers.

The 80×30 metre artwork on Hatta Dam portrays the late Sheikh Zayed bin Sultan Al Nahyan, and the late Sheikh Rashid bin Saeed Al Maktoum, and was devised as part of the second phase of the Dubai Street Museum project by Brand Dubai, in partnership with Dubai Municipality.

The creation of the mural also supports the objectives of the Dhs1.3bn ($354m) Hatta Comprehensive Development Plan announced in 2016 by the Vice President and Prime Minister of the UAE and Ruler of Dubai, His Highness Sheikh Mohammed bin Rashid Al Maktoum, said the Dubai Media Office.

Maitha Buhumaid, director of Brand Dubai, said that the selection of Hatta as the location for art installations to be created under the Dubai Street Museum project is part of the Media Office’s contribution to achieving the objectives of the plan.

The Dubai Street Museum project aims to transform Dubai into an open-air museum, and promote aesthetic excellence and innovation. The first phase of the project included the completion of 16 murals on themes drawn from the UAE’s history and rich heritage.

The Hatta Dam mural was painted over the course of two weeks by German artist Andreas Von Chrzanowski, also known as Case.