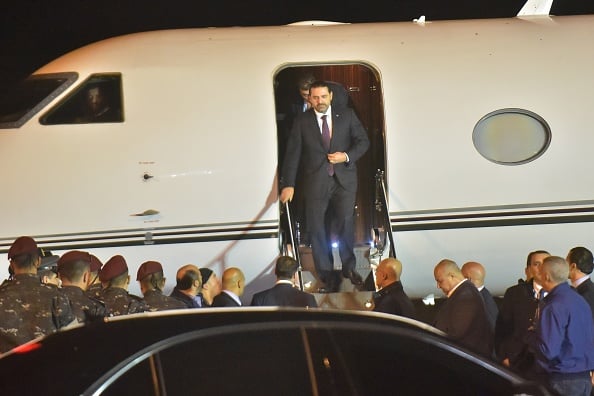 Saad Hariri returned to Beirut on Tuesday night for the first time since his controversial resignation in Saudi Arabia.

The official’s resignation on November 4 threw Lebanon into a political crisis and placed it at the centre of a regional rivalry between Saudi Arabia and Iran.

Hariri was seen greeted by members of Lebanon’s security forces as he left a plane at Beirut airport.

Supporters celebrated his return with fireworks, according to local reports.

Further celebrations are planned for Wednesday amid expectations Hariri will participate in Lebanon’s independence day parade.

He is also expected to meet with Lebanese President Michel Aoun, who has refused to recognise the resignation until it is made in person.

Aoun’s decision echoed the sentiment in Beirut where some accused Saudi Arabia of pressuring Hariri to resign and then holding him hostage.

Earlier on Tuesday, Hariri travelled to Cyrpus to meet with Cypriot President Nicos Anastasiades. He had previously been in Egypt for talks with President Abdel Fattah El Sisi where he said he would announce his “political position” when he returned to Lebanon.

Prior to this, he left Saudi Arabia for Paris for a meeting with French President Emmanuel Macron.

Hariri warned in interviews after his resignation that Lebanon risked Arab sanctions and other repercussions due to the actions of Shia militant group Hezbollah, an Iranian ally that has been actively participating in the war in Syria on the side of Syrian President Bashar al-Assad.

He also stated in his resignation he feared a similar fate to his father, the country’s former prime minister Rafiq Hariri, who was killed in a 2005 car bombing blamed on Hezbollah.

Saudi Arabia wants Hezbollah’s influence on Lebanese society diminished and has actively tried to strengthen the country’s army as a counterweight to Iranian influence in recent years.