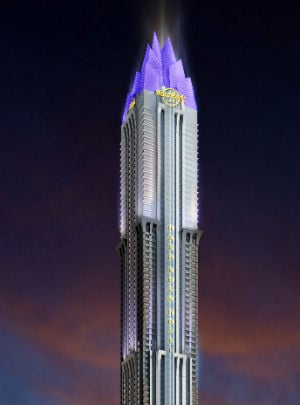 International hospitality chain Hard Rock International has announced that it will open the Middle East’s first Hard Rock Hotel in Marina 101, the second tallest building in the UAE upon completion, by mid-2015.

The hotel will consist of 281 rooms and will occupy the first 33 floors of the 101-storey building, a statement said.

Hard Rock Hotel Dubai Marina will feature a soon to be unveiled club lounge and dining establishment on the 101st floor complemented by the brand’s signature entertainment.

The hotel will also feature live music performances and other amenities such as the Rock Spa and the Body Rock workout facility.

Additionally, the property will offer pre-function meeting and event space, including an outdoor terrace at lobby level and the 101st floor lounge area, legendary music memorabilia, a world famous Rock Shop featuring Hard Rock’s iconic merchandise and The Sound of Your Stay – the brand’s music amenity programme exclusive to guests of the hotel.

“We look forward to launching our hotel product to a region already familiar with and embracing of our cafe brand.”

Jassim Alseddiqi, CEO of Abu Dhabi Financial Group, said: “We are pleased to bring the Hard Rock Hotel Dubai to the Marina 101 development at a time where Dubai’s tourism sector is experiencing continued rapid growth.

When choosing a hotel to be placed, we were seeking an iconic global brand boasting the same irreverent spirit as the destination it represents and found that in our collaboration with Hard Rock.”

Currently the group has a Hard Rock Café in Dubai Festival City with another Hard Rock hotel being planned in Abu Dhabi.