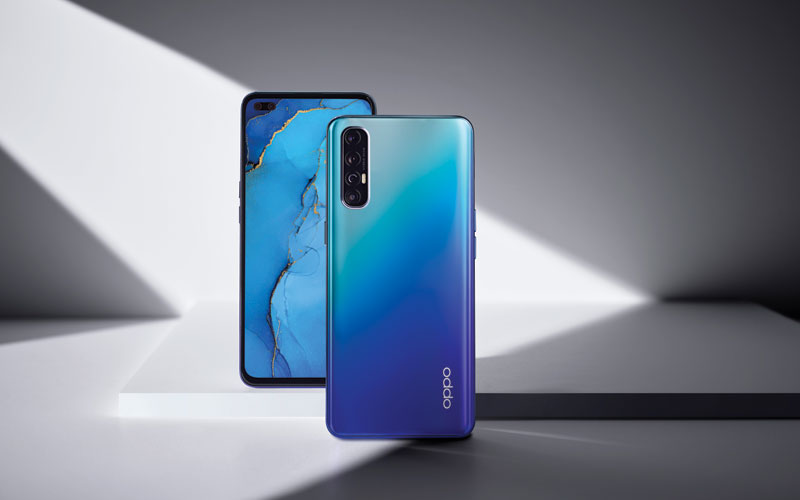 Undoubtedly, cameras are among the most used features and a make-or-break point when it comes to deciding your next smartphone purchase. And that’s where we began with our exclusive hands-on review of the phone.

First, the cold numbers: the quad-camera setup at the rear consists of a 64MP f/1.8 ‘ultra-clear’ primary camera, a 13MP f/2.4 telephoto lens, an 8MP ultra-wide-angle lens, and a 2MP mono lens.

In front, and on selfie-mode, OPPO has added an additional camera compared to the phone’s predecessor the Reno2, which was launched last year. The now pill-shaped dual punch hole camera on the Reno3 Pro consists of a 44MP primary selfie camera and a 2MP depth of field bokeh lens.

How do these six cameras operate in real-world scenarios? We took it out for a road-test in Dubai.

One of the most impressive features of the phone is the new ‘ultra-steady’ mode that is available when shooting videos from the rear camera. Think of it as an internal gimbal technology worked into your smartphone so that any shaky hand movements (or car movements in our case) didn’t result in the frame jumping up and down violently.

Surprisingly, we could rotate the phone an entire 360-degrees and the picture would always remain oriented the same way up on the 6.4-inch 1080p Super AMOLED panel.

Even in ultra-steady mode, we toggled the Pro mode on the screen, allowing the 8MP wide-angle lens to kick in. When we got to Downtown Dubai, we tested that wide-angle lens. OPPO claims that the lens can capture 119.9-degree shots and judge by our experience with the device; they aren’t off the mark.

When we wanted to know whether someone was really standing on the balcony of the 40th floor of a skyscraper around 200 metres away, that’s when the 13MP telephoto lens began to work wonders.

Three of those four rear cameras combine to offer 2X optical zoom, 5X hybrid zoom and up to 20x digital zoom. Even as we zoomed in, the clarity didn’t distort as much as we expected. But then again, the company released its Reno 10x Zoom last year, and have used that as a base since then to develop the zoom capabilities on this device.

There is an option to capture 108MP ultra HD images too. We tested that with a mural painted on the wall. The colours rendered well and the clarity, as expected, was razor-sharp.

There’s also ‘ultra-dark mode’ that switches on automatically when the illumination is below 1 lux. We tested it just past sunset, and the images did positively look brighter than the photos we captured on similar devices under similar lighting conditions.

The single-most promising case for this phone’s camera and one that makes DSLRs further redundant is the ‘Expert mode’.

But knowing in as much that our photography skills aren’t honed, we also chose to use the auto-mode within the Expert setting that allowed for the phone’s algorithms to configure the optimal settings automatically, allowing us to appear to be better photographers than we are.

Upfront, the selfies cameras aren’t an afterthought. There are a 44MP primary camera and a 2MP bokeh lens that allows for videos and images with a blurred background, putting the selfie-taker into the spotlight.

The Expert mode cannot be employed on the front camera, but helping selfie-takers look their best are specific AI-powered beauty modes which can make your eyes bigger, nose smaller, tuck your chin in or even just make your entire face ‘slimmer’.

Thankfully, we didn’t suffer from battery-anxiety when using this device – after a full day’s use – which included a photo and video shooting exercise for the most part of the evening, the 4025mAh battery had enough charge on it to make it through until the following morning which is when we needed to plug it in.

OPPO hasn’t, unfortunately, introduced wireless charging to this device, but attempted to make amends with its flash charging capability that charges the phone to nearly 50 per cent of its capacity in under 25 minutes.

As for the software, it operates an Android 10 with OPPO’s ColorOS7.1 layered above it and comes with 8GB RAM. We didn’t experience much lag when loading and opening apps on this device that supports 1080P streaming on Netflix backed by Dolby Atmos stereo sound.

The 256GB model is priced at Dhs1,899 and is available for pre-order from March 19, with deliveries in the UAE starting from March 26. Should you buy one? If a mid-priced device with a DSLR-baiting camera that is far more capable and agile than flagship devices in the market is a dealmaker, you already have your answer.

You can learn all about the new phone here.