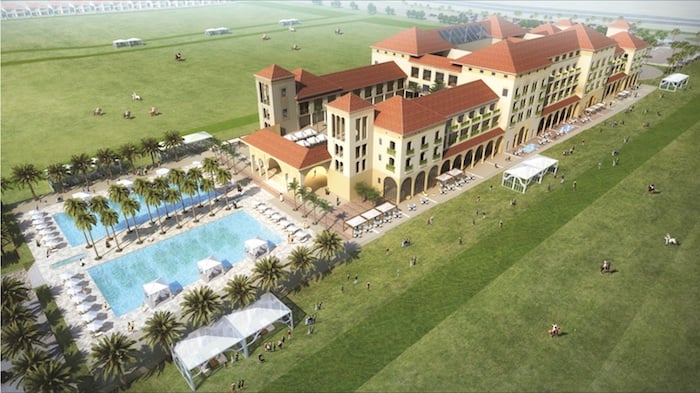 The other two projects include a new hotel – Metropolitan Sheikh Zayed Road and a residential development, Oasis Villas, with both together costing Dhs1.02 billion.

Khalaf Ahmad Al Habtoor, founder and chairman of the group, said that work is already underway on all the new developments.

He confirmed that they are being funded primarily from the company’s cash flows, with some part being financed through local institutions. “We have secured 100 per cent of the financing,” he added.

The project will be developed in phases, with the fields due for completion by end-2015, the stables slated to be ready in mid-2016, and the hotel and bungalows set for completion in 2017, confirmed Mohammed Al Habtoor, vice-chairman and CEO of the group.

The Metropolitan Sheikh Zayed Road, a four-star boutique hotel, is set for completion in 2016 and will have a total of 334 rooms and suites. In terms of F&B, it will include a lobby café, an outdoor courtyard café, an all-day dining restaurant and a Don Corleone Italian restaurant. Other facilities include a ballroom, five meeting rooms, a business centre and rooftop swimming pool and gymnasium.

Chairman Al Habtoor said: “When we closed the Metropolitan, which was our first hotel in Dubai, I promised our regular customers that I would one day revive the Red Lion. Today, I am delivering on that promise. I am not nostalgic, but I am conscious of what our customers want, and I am confident that this new hotel will become a new destination in Dubai.”

The Oasis Villas project, located alongside the Metropolitan Sheikh Zayed Road in Jumeirah, consists of 74 units and is due for completion in 2016. The residential complex will feature a gymnasium, communal swimming pool, children’s play area and a jogging track.

Occupying a built up area of 20,947 sqm, the four, five and six bedroom villas in the project will only be available for leasing, Habtoor confirmed.

“We are very confident about the UAE’s scope for further economic growth and hence we are investing heavily in this market,” said Khalaf Al Habtoor.

The group has invested over Dhs15 billion on the UAE in the last two years and is also looking at announcing more new projects, he said.

He also confirmed that the group has recorded strong growth across all sectors, with average annual revenue growth over the last three years standing at 12.5 per cent and average annual net worth growing at nearly seven per cent.

Going ahead, the group aims to post average annual revenue growth of 32 per cent over the next five years, with average anticipated net worth rising 17 per cent.

“We are opening several new properties over the next few years, which are not currently part of our portfolio, hence we expect to see increased revenues,” said Khalaf Al Haboor.

Despite all the rumours, the chairman confirmed that the group is not currently considering an IPO.

“We have been thinking about it for the last 20 years, and I spend millions to undertake the exercise every year, but a decision has not been taken to go for it.

“We don’t need to go for an IPO at present. If required sometime, after due consideration with the directors, we will float,” he added.