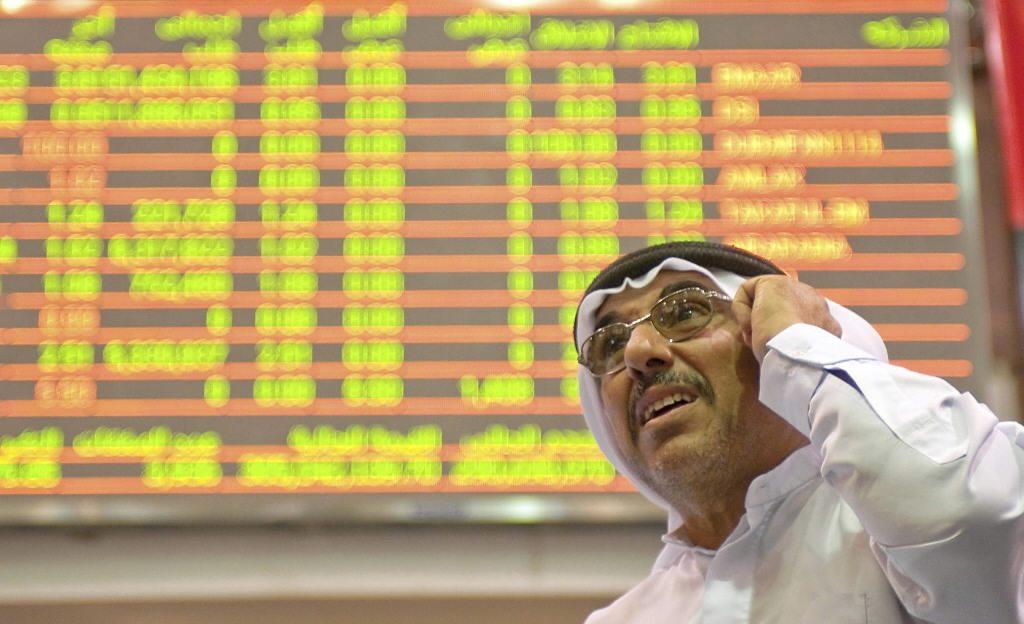 Gulf Arab stock markets will stay bullish in 2014 but rises are likely to slow because valuations have become more expensive and there are threats to the strong economic outlook, fund managers say.

US and European markets have regained peaks hit before the global financial crisis in 2008. Gulf markets are still around 15 to 50 per cent below those peaks – so they have plenty of room to continue playing catch-up.

The region is gradually becoming a mainstream investment destination for international funds. That trend looks set to persist, with equity index compilers MSCI and S&P Dow Jones Indices due to upgrade Qatar and the United Arab Emirates to emerging market status next year.

But Gulf stocks are no longer as cheap as they were relative to the rest of the world, and some economic shifts may not be ideal for markets. So their uptrends are likely to moderate, and sectors may not gain across the board as they did this year.

“There should be some moderation in the scale of rerating” the Gulf markets higher, said Amer Khan, fund manager at Shuaa Asset Management, though he predicted “tangible and visible earnings growth” for the region.

Saudi Arabia, where the main stock index has risen 25 per cent this year, will continue to benefit from growth in consumer spending and government expenditure on infrastructure and welfare.

Banks, which account for about 30 per cent of the index, may lead the market up. Although their profit growth is expected to be limited to single digits, analysts say interest margins have started stabilising after a period of decline, and firm U.S. interest rates next year may reinforce that trend.

“We’re very optimistic on banks in the countries which have strong macroeconomic environments, so Saudi Arabia, UAE and Oman,” said Bassel Khatoun, co-head for regional equities at Franklin Templeton Investments.

But there are risks for the Saudi market. Labour reforms launched this year have caused hundreds of thousands of illegal foreign workers to be deported; while this may help the economy in the long term, pushing more Saudis into private sector jobs, for now it is disrupting some companies which rely on cheap foreign labour and driving up their costs.

“There is upside in banks because net interest margins have stabilised but the top line could be affected by the potential slowdown in some sectors like real estate, construction, cement and retail,” said Ali Adou, portfolio manager at Abu Dhabi-based The National Investor.

“Labour issues will put pressure on the market overall, especially on the construction sector. The impact of delayed projects will be felt for the next two to three quarters.”

While the government’s fiscal policy is still expansionary, the 2014 budget, released on Monday, shows the government is starting to curb expenditure after years of huge increases; next year’s 4.3 per cent rise in planned state spending is far smaller than the 19 per cent leap envisaged by the 2013 budget plan, and the lowest increase since 3.5 per cent in 2003.

Lower state spending growth could slow the economy. The Finance Ministry predicted on Monday that gross domestic product would rise 3.8 per cent this year, down from 5.8 per cent in 2012.

Another threat to the stock market is the risk of lower oil prices; this would hit the petrochemical sector, which also accounts for about 30 per cent of market capitalisation.

Saudi officials continue to insist there is no need to cut the country’s oil output to hold up prices. But that could start to change if Libya’s politics stabilise next year, boosting Libyan oil exports – and more importantly, if Iran reaches an international deal on its nuclear programme that allows large supplies of Iranian oil to resume.

A potential boost to Saudi Arabia would be a decision to open its stock market to direct foreign investment; the reform has been under preparation for years and could happen quickly. So far, however, officials appear to be in hurry to implement it and risk a wave of instability in the market.

Saudi Arabia’s market is trading at just under 15 times its estimated 2013 earnings. That is not cheap; MSCI’s emerging markets index is below 11 times and its MSCI ACWI index, which spans both emerging and developed markets, is around 14.

The UAE and Qatar will benefit next year from an inflow of passive foreign funds responding to their upgrades to emerging market status.

Economic and real estate booms look set to continue in Dubai, where the index is up 102 per cent year-to-date, making it one of the world’s best-performing markets. Investor appetite has been boosted further by the emirate’s success last month in winning the right to host the World Expo 2020, which will justify new property and infrastructure projects.

Qatar has said it will step up spending next year on infrastructure projects that are expected to cost tens of billions of dollars in the next decade, many of them in preparation to host the 2022 World Cup soccer tournament.

“Qatar is still interesting. There’s so much government spending over the next five years and the market reflects good corporate growth and high dividend yield,” said Franklin Templeton’s Khatoun.

Big spending plans will not necessarily translate into strong stock price performance, however. Qatar’s market, up 26 per cent this year, is trading at just under 13 times estimated 2013 earnings, meaning it is no longer very cheap.

There is doubt over how much capacity Qatari companies have to benefit from the infrastructure spending, much of which will go to foreign firms. In a report last week, Fitch Ratings said Qatari banks benefited from a supportive environment provided by the government, but rapid growth might run up against capacity limitations and asset quality problems.

And next year’s inflow of foreign funds into Qatar and the UAE may not have a huge impact. Analysts estimate each country may attract an additional $500 million because of the MSCI upgrade; Qatar’s market capitalisation is about $150 billion.

In Dubai, which is trading at more than 15 times 2013 earnings, there is no doubt that the economic outlook is strong – but much of that is already priced into stocks.

For that reason, some fund managers are preparing for waves of profit-taking next year. A Reuters survey of Middle East-based investment institutions last month found a third expected to raise their equity allocations to the UAE in the next three months, but a third expected to cut them.

“We’re re-positioning right now towards more defensive yield plays with prospect for the first quarter,” said Marwan Shurrab, fund manager and head of trading at Vision Investments. “Expectations are that focus will continue on construction and real estate due to their ability to issue new projects and capitalise on the Expo 2020.”

Kuwait’s market, up 29 per cent year-to-date, has been among the Gulf’s disappointments this year and its performance in 2014 is likely to depend largely on its political climate, which will determine whether billions of dollars of planned economic development projects can actually go ahead.

The market rose over 40 per cent early this year on hopes that an easing of tensions between the cabinet and a confrontational parliament would clear the way for the projects. But stocks then fell back as it became clear those hopes were premature and as political bickering resumed.

“There is a huge disappointment from the government saying it will implement projects but the actual spending is not coming through,” said Fouad Abdulrahman Alhadlaq, deputy general manager at Kuwait’s Al Dar Asset Management.

There was fresh political noise this week as Kuwait’s cabinet ministers submitted their resignations to the prime minister, which could pave the way for a cabinet reshuffle. The move seemed designed to avoid a no-confidence vote in parliament against the planning and development minister.

“There are a lot of projects on paper – if they come true on the ground, it should have a huge impact on the market,” Alhadlaq said of Kuwait’s infrastructure plans.

Kuwaiti banks, which account for about 40 per cent of market capitalisation, are expected to post earnings growth of between 10 and 15 per cent next year, Alhadlaq said.