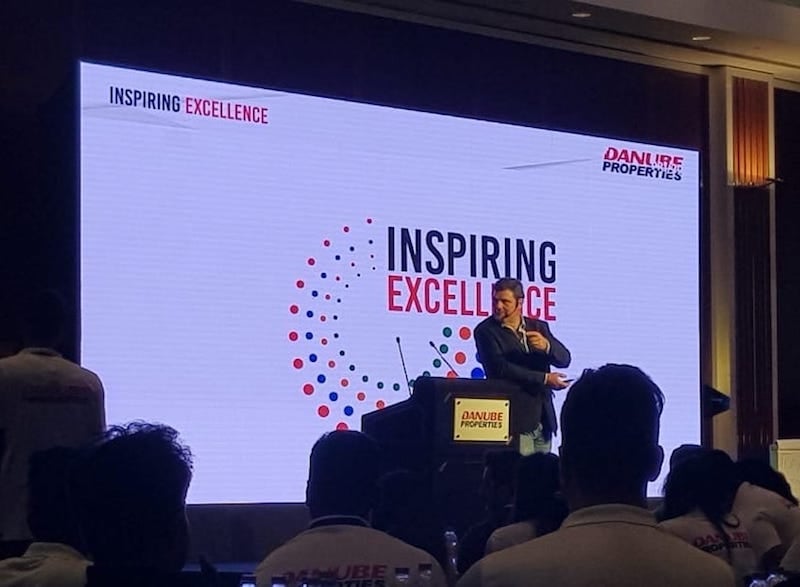 Do leaders carry secrets? Apparently they do.

Leaders are smart individuals who harbour plans that they keep to themselves, and reveal only when they have to. That masterstroke, according to trainer Mark Dickinson, defines the line between victory and defeat.

Dickinson was speaking to a packed room of 225 employees at the Danube Properties’ Inspiring Excellence event, curated by Gulf Business Academy, which was held at the Jumeirah Emirates Towers Hotel in Dubai on March 8.

Clearing the air about excellence and perfection, and oft-spoken roles of leaders and managers, Dickinson said: “Leaders are chosen, managers are appointed.”

But to be a leader, one must look and sound like one, the trainer said, adding that a leader makes everyone feel important.

Dickinson also dispelled the myth of perfection that exists in the workplace.

“People spend a lot of time trying to be perfect. What they don’t realise is that if you would put in a lot of energy to be excellent, and then move on to the next goal, you wouldn’t waste so much energy trying to perfect the last little bit; you’d already be moving beyond that, because you went to something higher,” Dickinson told Gulf Business.

“Excellence is this persistent, consistent attack on doing things better today than you did it yesterday. It’s all about growing it, building it and getting everybody around you to buy into that,” he added.

At the Danube event, employees – on the basis of self-evaluation – were grouped according to four principle personality types – organiser, director, team builder or creator. Employees were later tasked to identify their colleagues within the groups to get to know them better.

Holistically, the exercise helped employees internalise and identify their strengths and better understand their colleagues.

Feedback from the attendees

“I believe that I have the best set of people but I wanted them to be better than the best. It [The conference] was brilliant and awesome. The content of it was driven by two simple goals: to reduce the negative and increase the positive, and make them better than the best,” said Atif Rahman – director and partner, Danube Properties.

“It was very useful for people who want to be real leaders” – Pradeep Kumar, head of Project Management.

Gulf Business has partnered with expert trainer Mark Dickinson to organise training and mentoring sessions for corporates to help them achieve their goals.

The programme consists of an initial meeting with the top stakeholders to understand their vision and corporate strategy, as well as discussions with mid-management to identify key obstacles that impede growth and employee unity. Management feedback helps curate a bespoke training session, designed to suit the needs of that particular organisation.

Feedback is also gleaned from leaders post the event, following which they are assigned follow-through tasks to ensure that the message is reinforced.

From resolving conflicts to aligning growth plans, the session addresses all the challenges and opportunities required to energise and motivate the company’s employees.

The session can also be followed-up with a 100-day business coaching programme to ensure change – and healing – from the grass-root levels for increased productivity and unison.

“We create customised, spiritual, motivational learning experiences. The idea is to do storytelling on a very high level, because that is what people remember,” explains Dickinson.

“At the end of the event, the audience comes out enriched because the message sits in their head, [later] moves into the heart and then becomes an unstoppable force,” he adds.