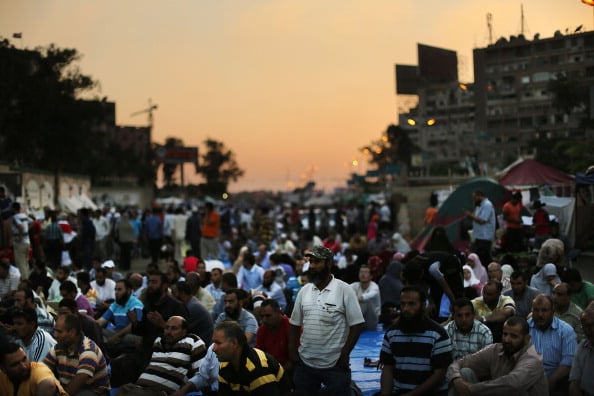 Twelve billion dollars in aid from Egypt’s wealthy Gulf allies have bought Cairo a window of several months to try and stabilise its politics and repair its state finances – or face fresh economic turmoil.

The massive packages of grants and loans unveiled by Saudi Arabia, the United Arab Emirates and Kuwait on Tuesday and Wednesday should boost Egyptian foreign reserves enough to avert a balance of payments crunch that was looming this year.

John Sfakianakis, chief investment strategist at MASIC, a Riyadh-based investment firm, estimated the $8 billion in aid from Saudi Arabia and the UAE could give Egypt a breathing space of four to six months. On top of that, Kuwait has since pledged a further $4 billion.

But the aid will not by itself solve two key problems in the Egyptian economy: a ballooning budget deficit and political instability that is scaring away foreign capital.

If major progress is not made in these areas by the end of this year, Egypt could again risk an economic crisis and be forced to seek large amounts of additional aid from the Gulf, putting itself deeper in debt to governments there.

“Unless there is a resolution of the politics/social schisms, private capital flows will remain elusive and capital flight risks high,” Raza Agha, chief economist for the Middle East at VTB Capital in London, wrote in a report.

The aid from the Gulf “buys time”, he said. “But key at present is whether anything will get the Muslim Brotherhood off the streets.”

Mursi’s Islamist supporters continue to protest at his removal by the army. Dozens were shot by troops on Monday.

The Gulf money may also ease pressure on Cairo to finalise a $4.8-billion loan from the International Monetary Fund. Securing it might impress other would-be lenders and investors, but its conditions might prove too politically painful within Egypt.

The country’s foreign reserves totalled $14.92 billion at the end of June. Excluding inflows of aid, they have been falling by around $1-2 billion every month, so the latest aid may cover Egypt’s external deficits into early 2014.

The speed with which Saudi Arabia, the UAE and Kuwait announced packages – less than a week after Mursi was deposed – is as important to financial markets as their size. The three Gulf states, which mistrusted Mursi and his Muslim Brotherhood, signalled they are determined to keep a post-Mursi Egypt afloat.

The confidence created by that signal will help Egypt roll over about $5 billion in dollar-denominated Treasury bills maturing by the end of 2013, and could limit or halt further depreciation of the Egyptian pound in coming months.

Cash grants totalling $3 billion from Riyadh, Abu Dhabi and Kuwait – a quarter of their combined $12 billion in loans, grants and donations of oil products – dwarf the $250 million in annual civil aid on offer from Washington.

The European Union has been giving some $190 million annually. Late last year, the EU said up to $6.4 billion in loans and grants was on offer – but that is tied to reforms and would include the European share of the potential IMF loan.

Egypt’s military also receives an annual $1.3-billion direct subsidy from the United States. The arrangement, dating from the 1980s, is related to Cairo’s 1979 peace treaty with Israel.

The appointment as interim prime minister of Hazem el-Beblawi, an international economist who ran Egypt’s Export Development Bank for 12 years, may increase the chances of Cairo obtaining the long-delayed loan from the IMF.

“They need the IMF stamp of approval, given the IMF has criteria regarding economic reforms,” said Sfakianakis. “That will give far greater confidence that the government is addressing the financial reform area, which will unlock further financial aid from the European Union and other agencies.”

But to satisfy the IMF, the government would have to commit to deep cuts in its budget deficit, which nearly doubled from a year earlier to 113.4 billion Egyptian pounds ($16.2 billion) in the first five months of 2013.

It remains unclear whether any Egyptian government – either the interim administration, or the government that would take power after parliamentary elections scheduled in about six months – can muster the will to make the politically explosive cuts in subsidies required to reduce the deficit.

For that reason, an IMF loan may never materialise, said Farouk Soussa, chief Middle East economist at Citigroup: “An IMF deal seems unlikely to me in the current political environment and until a new permanent government is put in place,” he said.

“In fact, a populist, anti-IMF platform is more likely to win votes, so I am not optimistic on a deal in the long run either.”

In addition to healthier state finances, Egypt needs private capital to revive its economy. Foreign direct investment was just $1.4 billion in the nine months to March, compared to annual levels above $10 billion a few years ago; political stability is vital to lure private money back.

The size of the Gulf aid packages may give the post-Mursi government room to launch spending programmes designed to buy social peace, as Saudi Arabia itself did successfully after the 2011 uprisings elsewhere in the Arab world.

Soussa said he expected the new Egyptian administration to focus on restoring law and order through a combination of tougher policing and raising standards of living.

“I’d therefore expect to see a ramp-up in public services, a raise in salaries, and an increase in imports of key products such as fuel and food,” he said.

But it is not clear whether an end to shortages and better living standards could paper over political divisions that have widened since Mursi’s removal, with many Islamists outraged by the army’s intervention and this week’s bloodshed in Cairo.

While Brotherhood leaders insist they will not take up arms, others may. Attacks on tourists in the 1990s hit Egypt’s income hard. When Algeria cancelled a 1991 election that Islamists were winning, a decade of civil war ensued, crippling development.

Emad Mostaque, strategist at Noah Capital Markets, said there was a risk that polarisation on the streets could develop into general strikes and militant violence, which would seriously damage the Egyptian economy.

“We remain concerned about attacks against tourist centres by splinter groups,” Mostaque said, “With our key takeaway from Algeria being that groups can quickly re-radicalise and it doesn’t take many people to cause an almighty mess.”