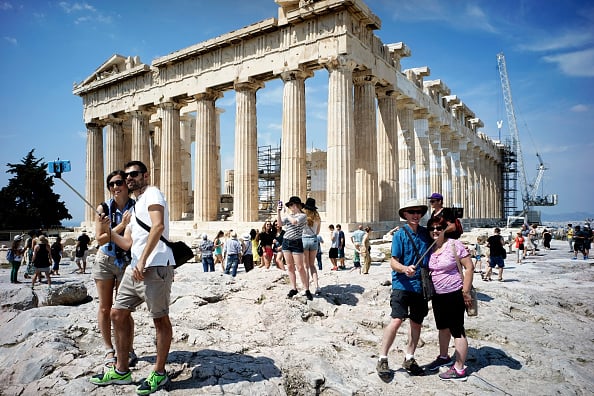 Economic laggard Greece launched a charm offensive in June to attract visitors from, and through, the United Arab Emirates following the European Parliament’s move to provide Emiratis with visa-free travel. Unveiling the strategy at a social event hosted by Sheikh Hasher bin Maktoum in his Dubai palace, the Greek tourism minister Elena Kountoura told Gulf Business that her country wanted to open up to new markets using the UAE as a strategic hub.

“We are very happy that the Emirati people achieved the Schengen visa waiver; we strongly support that decision,” she said. “The four-hour direct flights between Dubai and Athens are also very important because we want to bring as many tourists from here to Greece as we can.

“Dubai is also a destination seeing visitors arriving from China and Australia, for example. It is getting really popular and, at the same time, these visitors may want to see another nearby destination. I would love to open up new markets like Asia so that people stop by Dubai and then continue to Athens afterwards.”

Tourism in Greece is said to account for 20 per cent of the entire economy with Europeans visitors being the largest market. Despite the economic crisis, which has left the debt-laden country on the verge of leaving the European Union, Kountoura insisted that visitor numbers had actually grown exponentially in recent years. She claimed that the country’s rich history, hundreds of “beautiful islands”, cruise industry growth and focus on better quality ports and marinas continued to provide a bounce.

“This year, in the first quarter, we have seen a 45 per cent increase year-on-year in the number of tourists,” the minister said. “The income from tourism compared with 2014 is also up by around 12 per cent this year.”

Although riots plagued the streets of the capital city Athens during the height of the financial woes, the minister insisted the location had actually emerged as a favourite spot for those taking European city breaks.

The ministerial visit was also designed to attract inward investment from the Gulf Cooperation Council. Asked if the reports of whole islands being privatised in order to service government coffers were true, Kountoura said: “No but like every other European country, we are open for people to come and invest. The truth is that we have a lot of islands and there are a lot of opportunities. We are doing business as usual, nothing more and nothing less.”

Questioned on the idea of ‘Grexit’ bringing about disaster for the tourism industry in Greece, she responded: “Let’s not mix politics with tourism. Greece tries to have a fair and honest agreement with the EU but this has nothing to do with tourism. It has no impact.”