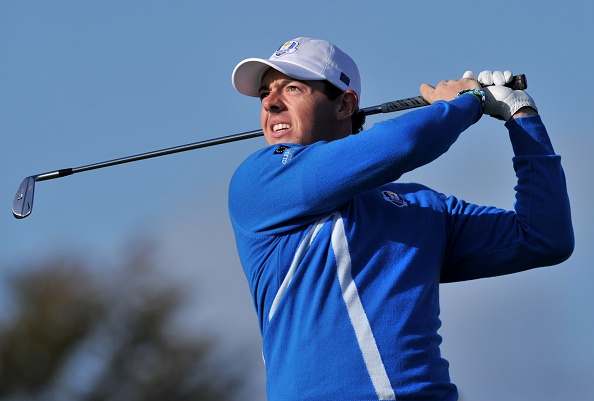 Rory McIlroy rattled in six birdies in an opening round six-under 66 at the DP World Tour Championship on Thursday as he showed no signs of rustiness from a six-week break to share a one-shot lead with Ireland’s Shane Lowry.

World number one McIlroy started in blistering fashion. He sank a 12-foot birdie on the opening hole and picked up a shot on the second after a misjudged eagle attempt.

A lip-out from 10 feet on the third halted his charge, but he shrugged that off with a sublime tee-shot on the 245-yard par three fourth as he made it four birdies in five holes.

“You never expect to start like that, but I’ve been hitting the ball well for the last couple of weeks I’ve been practising – it was just a matter of taking that good range play onto the course,” McIlroy, 25, told reporters.

The four-time major winner then recorded nine successive pars before picking up shots on 15 and 16. In 21 rounds at the Earth course, he has shot six-under on six occasions.

“I feel it really suits my play,” said McIlroy. “I can be aggressive with my driver and that can set me up to hit shorter irons to the greens and give myself a lot of birdie opportunities. I didn’t feel I took as many as I could have.”

Lowry made four birdies in his final six holes to also finish one shot ahead of Denmark’s Thorbjorn Olesen and Scotland’s Richie Ramsay who stand joint-third on 67.

Henrik Stenson, second on the money list, carded a 68 but the other big names struggled. Jamie Donaldson made a par 72, Sergio Garcia 73 and Marcel Siem 76.

McIlroy was playing for the first time since early October after taking a break to fight a still unresolved legal case with his former agents.

Ahead of Dubai, McIlroy said he felt fresh following his break and that could be an advantage over his jaded rivals, many of whom have played back-to-back tournaments for several weeks.

During his break, the Irishman was crowned European Tour money-list winner for the second time in three years after his nearest rivals failed to win the $7 million Turkish Airlines Open last week.

But there is still a lot to play for in Dubai, with the top 15 players sharing a $5 million bonus pool on top of the event’s $8 million purse.